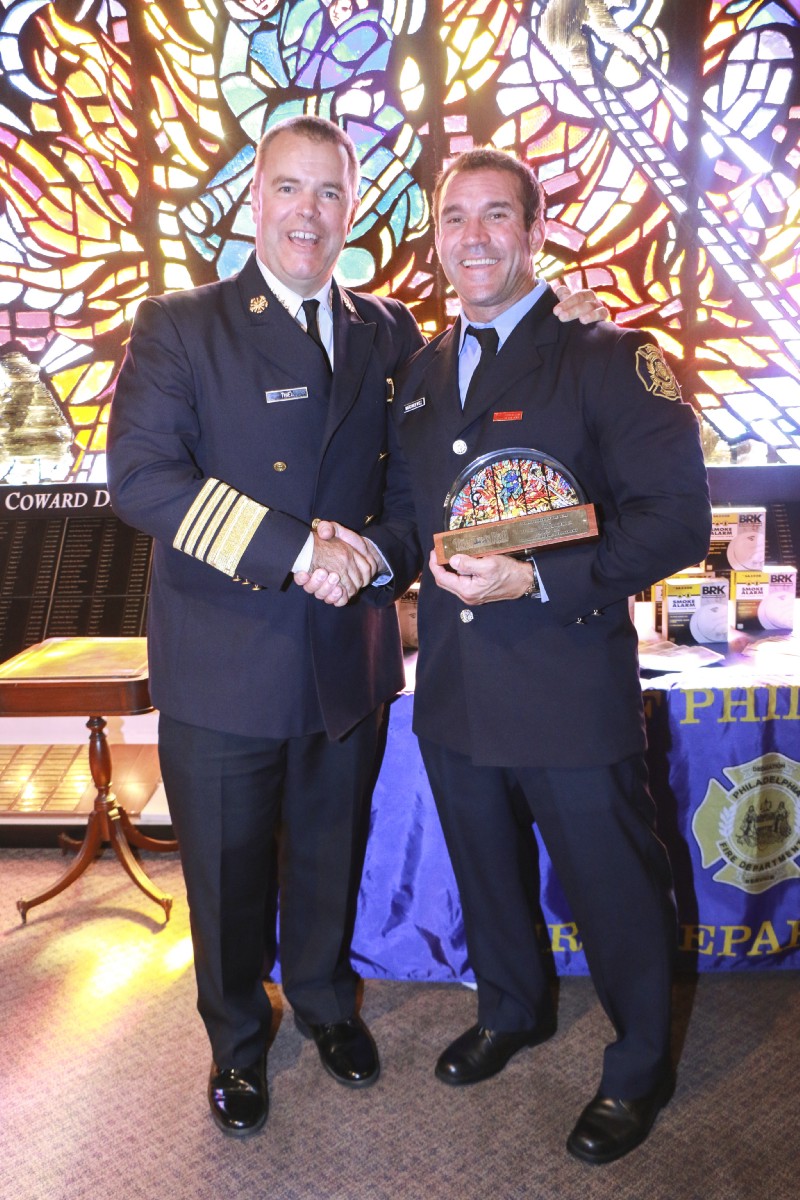 Early last month, the Philadelphia Fire Department publicly recognized one of its own with the “Firefighter of the Year,” award, and he’s stationed right in the River Wards’ backyard.

Firefighter Jason Marcinkiewicz, 46, of Ladder 16, received the award for his efforts during a three-story house fire in Port Richmond on June 8.

The East Torresdale resident was off-duty at the time, driving his motorcycle into work.

“For some reason, from the minute I woke up, I had to leave 15 minutes early, and I couldn’t tell you why. Something was pushing me out the door,” he said. “And, even though I arrived there first and give instructions to the women hanging out the window of what not to do, I didn’t do this by myself. They gave me the award, but there were several companies and dozens of firefighters involved and paramedics and dispatchers. And, even the neighbors were great. Port Richmond is such a great, strong Philly neighborhood.”

Aside from leaving early, Marcinkiewicz took an alternate route.

“I was getting close to work and smelled some smoke. And, I turned the corner onto Lehigh and saw a column which was distinctly dwelling smoke,” he said. “And, worst-case-scenario, I’m thinking people are trapped in there. So, I pulled up, and I saw two women hanging out the window and they were getting ready to jump. As firefighters, that’s one of our worst scenarios, especially a jump from the third floor like that or higher.”

Thick smoke was coming from behind the women, and the flames were starting to creep along the ceiling above them in a house at Lehigh Avenue and Almond Street.

Although Marcinkiewicz’s first instinct was to go inside and rescue them, he knew he wouldn’t make it without oxygen and he’d need to be rescued, too.

Instead, he chose to talk the women through the situation.

“I told them the ladder would be here in a minute, I told them not to grab the ladder when it got there,” he said. “To their credit, these women were very, very brave. They deserve more credit. They followed all instructions and did not jump. It was very hard for these women to hang in there.”

It was a tough decision, but ultimately, the right one. 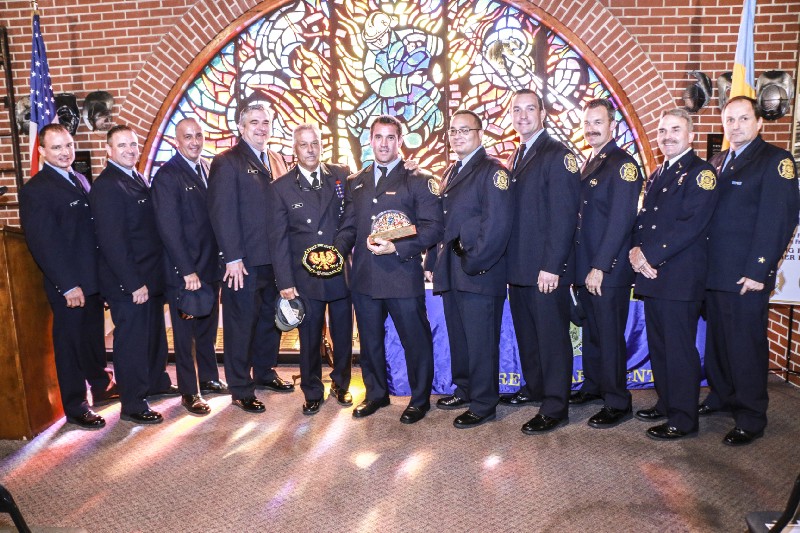 Minutes later, Marcinkiewicz heard sirens, the ladder pulled up and “it was the best sight I had ever seen in my whole life.”

Everything that happened next went right.

Marcinkiewicz threw the 16-foot ladder down the street, took the 28-foot extension, turned around and nothing was in his way to throw the ladder up.

While he placed the ladder up to the window for rescue, other firefighters were already working on the aerial ladder.

Three women were pulled from the front window through a coordinated effort and, at the same time, a man from Ladder 16 and a man from Engine 25 rescued a man from “the ugliest part of the fire” inside.

“Everybody did this together this morning,” Marcinkiewicz said. “For four occupants to come out alive from a fire like that means everyone did everything right and by some luck, everything went right.”

The Philadelphia Fire Department singled out Marcinkiewicz for his role in the rescue, but just as he recalls the actual fire, he is quick to not take all the credit.

“I can’t say a whole lot about the individual award because we worked as a team,” he said. “For anyone in your adult life, for your boss to tell you, ‘Hey, you did a good job,’ that feels good. So, down the line, it’ll mean more. But, right now, I really just look at it as we were just doing our job.”

Several of the firefighters who responded to the fire were recognized by the Philadelphia Fire Fighters’ and Paramedics’ Union.

For Marcinkiewicz, his actions are just a reflection of years of training and others mentoring him.

“You don’t roll out of bed ready to do something like that one day,” he said. “There were a lot of other hands in it.”

Marcinkiewicz started fire school in July 2005 and was stationed at Ladder 16 in November 2005 and has been there ever since.

After applying for and not getting the job in his 20s, Marcinkiewicz went on to obtain his bachelor’s. Ironically, soon after earning his degree, he received the letter he had been accepted into the next class for the Philadelphia Fire Department.

For Marcinkiewicz, being a firefighter is not just a job.

“It’s a calling. It’s something you know that’s in you your entire life. It’s just a matter of if and when it’s going to happen,” he said. “If you’re in it for the right reasons and to help people, if you’re in it for your four days on, it’s the best job in the world. You put your uniform on and it means something.”

Marcinkiewicz is quick to dispel the image of firefighters laying around the firehouse.

“The days of that image of firemen laying around are over. There’s too much pride now. Not that we’ll ever do as much as they did because there were so many fires in the Golden Age of firefighting, but everything has changed,” he said. “Diet has changed. The meals have changed. Everyone works out now. There’s no one laying around watching TV. There’s really no other job like it where you can go from 0 to 90 even if you weren’t ready for it, you were ready.”

And, while action and adventure are a hard motivator to deny, for Marcinkiewicz, it’s ultimately about the people.

“When someone says, ‘Hello,’ or gives you a certain look, it’s a really great feeling because they may be the people you’re helping next.” ••