At the end of every season, NFL players must feel a lot like the Wizard of Oz Scarecrow after he gets attacked by the Wicked Witch’s flying monkeys; body parts everywhere and can someone help put me back together.

Eagles Pro Bowl center Jason Kelce feels like the Scarecrow more and more after every season. 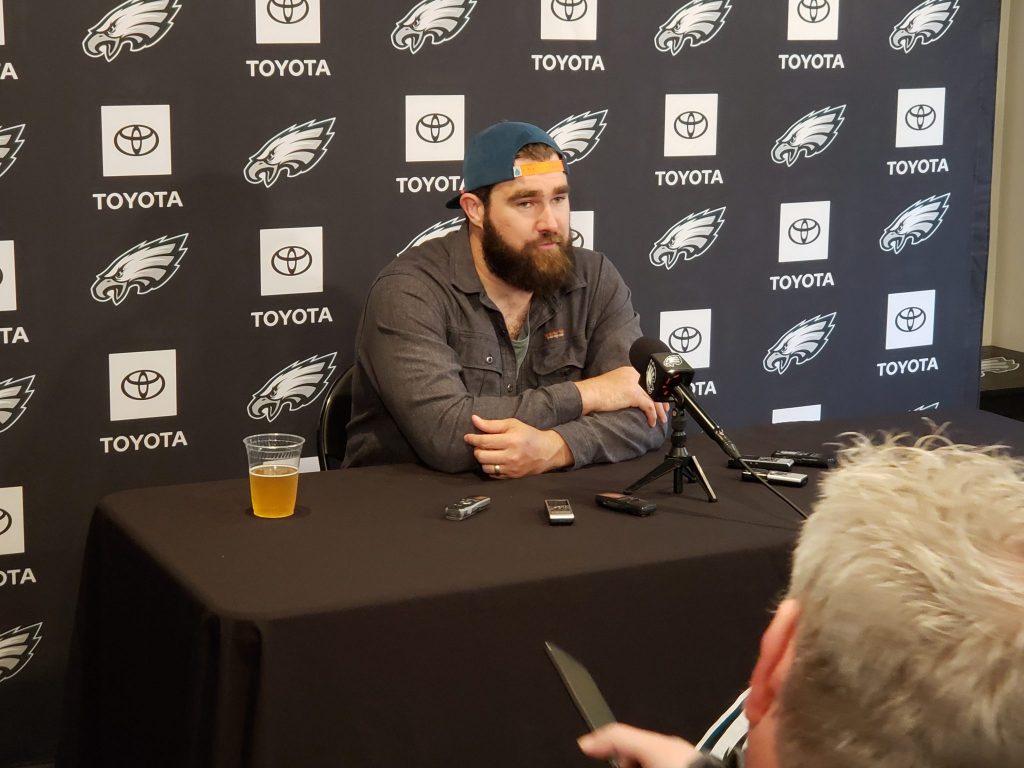 He gave thought to even hanging up his cleats for good after the 2018 season, again.

“I’ve been on the mindset for the last two-three years,” Kelce said at a recent small gathering with reporters at the NovaCare complex. “I think most of the older guys are in the same mindset. There are times during the season where you’re banged up. Last year, I played through a grade two MCL sprain. A broken foot, other nagging things that have been building on me. I had a torn elbow. At one point, I had a brace on the entire left side of my body and that stretched the body a little bit. I think that most of the other guys, especially talking to them, getting their advice, taking time after the season, step back, recover…you get a much more clarity of mind. I talk to my wife about where we’re at. Like I said, in my mind it was very much always still continuing to play. Just now, there’s more little things in there that factor in.”

It was the No. 1 thing everyone wanted to talk about with the seven-year veteran. Once a player of his caliber even mentions retirement, it is a big topic. Kelce was asked to expand on the personal review he goes through each year.

“At the end of the season, you kind of wait for your body gets healthy, one, then you kind of step back, you know it’s a long season, especially for older guys,” Kelce said. “It really starts to wear on your body a little bit more. It was very, very clear that I wanted to keep playing. I got to the point where I decided to do that. I don’t know what it’s going to be like when I ultimately make the decision not to keep playing. But I got a pretty good word of advice from a good friend of mine…’when in doubt, don’t.’ So I’m going to stick to that.”

The 6-foot-3, 295-pound lineman said his passion to play is still there.

“Obviously, all the reasons to keep playing are there,” Kelce said. “You love playing the game, love being around the guys, you love competing, battling together with people you care about…all that stuff is still very strong on your mind. As you get older, little other things peak up. At this point, there’s still too many positives and not enough negatives to really seriously step away from the game.”

Kelce said he did not require surgery in the offseason. He reported he is all healed. The Eagles have a talented roster. If oft-injured quarterback Carson Wentz is healthy and can play at the level he performed during the 2017 season when he was the frontrunner to win MVP of the league, the Birds will be likely be the prohibitive favorites to win the NFC.

Kelce was asked what the benefits are to having older, even banged-up players on the roster in key roles.

“We’ve invested in some older guys,” Kelce said. “We also have a wealth of some young talent on the team, in particular at the quarterback position. I really think it takes a really good balance of having older guys and younger guys. We’re probably going to pick up some more guys up here in a few weeks to balance out the younger portion of the roster. I just think it leads to just a better balance for your team. Obviously, the younger guys come in and are excited to play in the NFL and they have a youthful enthusiasm that’s infectious. The older guys sometimes have to guide that in the right direction. We have to figure out how to get the best out of those guys. The teams that I’ve been on that had a good balance of older and younger guys generally tend to perform the best.”

Information is better in today’s pro sports arena. Athletes are more aware about what they are going through with regard to wear and tear of their bodies, especially their brains. Kelce has said several times during his career that he was not going to be a Bruce Matthews and play 19 seasons in the NFL.

“Some guys want to play until the wheels fall off,” said Kelce, who is 31 years old. “Some guys want to play and think about life after football. Bottom line is you want to do what you’re comfortable with and what you’re happy with, right? For me, it’s a simple cost/benefit analysis: How much do I get from this game? What’s going to happen by continuing to play? Where’s my body at? Where’s my mind at? All that stuff. There are so many factors that go into that. The biggest thing is, I know I love doing this. It makes me happy. I know I enjoy being part of this group, these guys and this team. That made this decision very, very easy.”

Unlike the scarecrow, Kelce has always had a heart, he intends to follow it. ••

Keen gets talent, drive from brothers