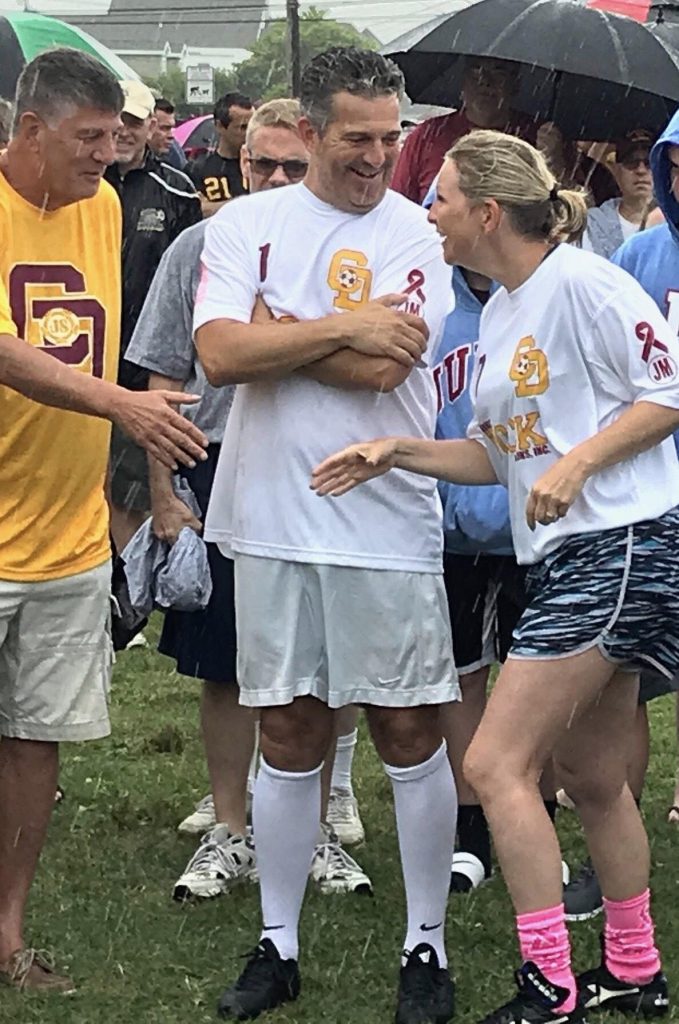 Shawn Cannon didn’t even know he was missing it, but he found it.

Cannon, a 1982 graduate of Cardinal Dougherty High School, always loved his school and he was always proud that he played soccer for the Cardinals. The thing he’s most proud of is winning a Catholic League championship in 1980 when he was the goalie.

Like all adults, Cannon has moved on. He’s living in Bensalem with his family, he works and he spends time watching his children, Patrick, 19, and Bridget, 14, play sports. So he really didn’t have a lot of time to think about his high school days.

That’s when someone asked him if he’d be heading to Wildwood to take part in the annual alumni soccer game.

He decided he would and also get more involved with his alma mater.

“It really did get the spirit back in me,” said Cannon, who will play this weekend at the fifth annual CD Soccer Garnet and Gold Game at Bill Henfey Park at 8th and Central avenues in North Wildwood. “I met with Steve Schmidt, he does everything for this game and the alumni soccer, and I wanted to get involved.

“I said I can play 10 minutes because I’m not in the same shape I was in high school. But I wanted to play to see everyone and I also wanted my kids to have a chance to see me play. They’ve heard the stories, now they can fill it in with some of the people.”

That’s exactly how this game got started.

Schmidt would attend the annual Dougherty Soar at the Shore, which began 23 years ago. Then five years ago, he spearheaded an alumni soccer game. He did it because the former Dougherty soccer player wanted to see everyone who proudly wore garnet and gold get a chance to gather and show what they can do on the pitch. It’s grown into much more.

This year’s game is being played in memory of 2009 graduate Mark Keeley, who was killed in the Tacony natural-gas explosion in 2011.

“We piggybacked off the Soar at the Shore, they do such a great job, and since everyone was down there, we decided it would be a perfect time to do it,” Schmidt said. “We didn’t start this as a charity. We just wanted people to get together and have fun. But every year, it’s grown.”

It’s grown in size. Cardinals from all years show up, ready to play. And the more it grows, the more it helps.

The CD Soccer Alumni is now a nonprofit that donates money to many different causes. They support local high schools, including Father Judge, Archbishop Ryan and Roman Catholic, local club soccer teams and the families of Dougherty grads who are facing hardships.

The more people who play, donate and give back, the more the group can help others.

This year, the group is giving back to all Dougherty grads.

Sponsored by Schmidt’s group, this year, Dougherty alumni and their children can play golf for free at Jurassic Adventure Golf, 300 New Jersey Ave.

“We have so much going on that weekend,” said Schmidt, who this year received the Chick Fallon Award from the Southeastern Pennsylvania Soccer Hall of Fame for his contributions to the soccer community. “The big thing is the Soar at the Shore, but now it’s a great weekend. We wanted to do something that would give families something to do. And the golf course has been great, they were so helpful.

For Schmidt, the weekend couldn’t be more perfect.

He loves it because it gives him a chance to be around the soccer community.

He loves it because it allows him to give money to worthy causes.

And more than anything, he loves it because it helps keep alive the spirit of the program he loves.

And the best way to do that is by doing what many consider the highlight of the weekend, when the newest class of the CD Soccer Hall of Fame is announced.

Each year, the next class is announced during halftime of the game. Those players and coaches will be enshrined at the annual banquet in November.

“The hall of fame announcement is a very emotional time,” Schmidt said. “Dougherty has had some great soccer players over the years. We don’t announce it until the game, but this year Florian Kempf is going in. He was a great soccer player and he kicked in the NFL. He’s one of the best players ever.”

Schmidt is also proud that the weekend is more than just soccer. In fact, soccer is just a small part of it.

The game is played Saturday morning. The night before, on top of the golf outing, there will be a gathering of Dougherty grads from 7 to 10 at Keenan’s. On Saturday afternoon, the Soar at the Shore runs from 2 to 7. And on Sunday, Father John Nordeman, a 1983 grad, will say Mass at the Lou Booth Amphitheater at 2nd Avenue on the beach.

“We get more than 200 people there,” Schmidt said. “The whole weekend has grown every year.”

Just this year, it added Cannon and his family.

“I’m pretty excited about it,” Cannon said. “I’m happy that (my family) will get a chance to see me play. It won’t be long, but I’ll just go out and have fun. It seems like the perfect day.”

And to donate or for more information on the soccer program, visit www.cdsocceralumni.org.