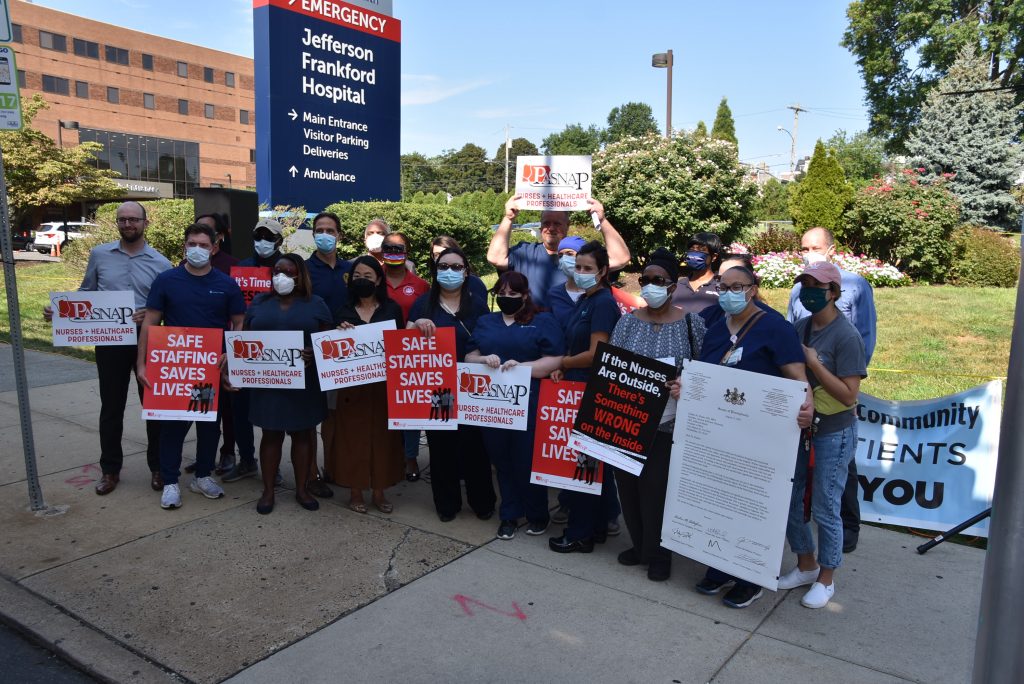 Nurses at Jefferson Frankford Hospital rallied outside the hospital on Friday morning, complaining about staffing shortages and calling on Jefferson to respect their federally protected right to pursue union representation.

The nurses — carrying signs reading, “Safe Staffing Saves Lives” and “It’s Time to Respect Nurses & Patients” — noted that the World Health Assembly chose 2020 as the International Year of the Nurse and the Midwife, adding that the year was unlike any other due to the coronavirus pandemic.

Still, despite being hailed as heroes, the nurses said Jefferson ended its 401(k) contribution while it made $400 million in profits and continued to move to acquire Einstein. They pointed to a recent night shift with just two nurses in the emergency room and say there is a need for better equipment. Their ideas and concerns have been ignored, nurses say, and morale is low.

“We weren’t treated like heroes,” said Kevin Diamond, a registered nurse for five years at Jefferson Frankford who works in the observation unit. “We want to have a voice at the table.”

Now, they are hoping to gain representation from the Pennsylvania Association of Staff Nurses and Allied Professionals.

More than 200 nurses work at Jefferson Frankford, at 4900 Frankford Ave. As the union organizing campaign continues — not all nurses support the union effort — PASNAP has filed unfair labor practice charges against Jefferson with the National Board of Labor Relations, claiming Jefferson has gone too far in discouraging the union bid.

One of those complaints centers on the case of Nicki Lewis, a former RN at the hospital who supported the union effort. Nurses say the hospital agreed to her request to move from full time to per diem, but disabled her payclock access on her last day and withdrew the per diem offer.

The Times reached out to Jefferson for comment on the rally, but did not receive a response.

“This staff has always gone beyond the call of duty,” Sanchez said.

Nurses from Einstein and Temple-Jeanes spoke of the benefits of union representation at their hospitals. ••