Our Lady of Calvary eighth-grader Ciara Dubeck isn’t merely a rocket scientist anymore. She’s now a software developer and entrepreneur who will attend her first Super Bowl this Sunday.

Dubeck earned those distinctions by winning a national contest to design and sell an idea for improving the health and wellness of her school community. State Rep. Mike Driscoll joined representatives of AdVenture Capital and the Mid-Atlantic Dairy Association’s Fuel Up to Play60 initiative to honor Dubeck in a ceremony — and going-away party — at her school on Friday.

Late last year, Dubeck and hundreds of other students from throughout the Mid-Atlantic traveled to the Newtown Square headquarters of global software services provider SAP for a Shark Tank-style competition where Dubeck pitched her winning idea.

Dubeck, who captains Calvary’s Rocket Club, conceived of a mobile phone app that would facilitate healthy lifestyle competition among her classmates. The app would award students points for their daily physical activities, for creating classroom produce gardens, for participating in weekly gym competitions and for sharing healthy recipes. The app would be linked to a website, where students could track their progress. Prizes could be awarded to top participants throughout the school year.

A panel of experts chose Dubeck’s concept to enter a national online poll, where she received the most votes and won a Super Bowl trip for herself, her parents and her younger sister. Dubeck was also awarded $11,000 to develop her mobile app.

“Ciara is truly deserving of recognition and praise for utilizing her exceptional ability with diligence and for her tenacious pursuit of excellence,” Driscoll said in awarding a state House citation to Dubeck.

Local student soars: Our Lady of Calvary eighth-grader Ciara Dubeck (above) conceived of an app that would award students points for physical activities, gym competitions and sharing healthy recipes. She won a Super Bowl trip for herself and her family. Dubeck was also awarded $11,000 to develop her mobile app. WILLIAM KENNY / TIMES PHOTO 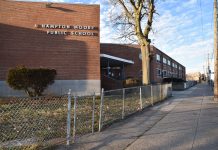 Pothole repairs Friday on I-95