Soccer is fun. Baseball is life. And this year, Archbishop Ryan’s Jason Keen had a very fun life.

Jason Keen is ready to get down to business.

Whether it’s in soccer, baseball or his job.

Keen just finished his junior year at Archbishop Ryan High School, and even though school is no longer in session, Keen won’t get a break from spending all his time there.

“I got a job as a janitor, so I’ll be there all the time,” said Keen, who lives a few blocks away from Ryan. “It’s a good job. You have to work hard, but it’s not a bad job. I’m going to be around anyway.”

When Keen isn’t cleaning up around the school, he’ll be cleaning up his game, both on the soccer field and on the pitching mound.

He admits soccer is a game he plays so he remains in shape for baseball, but he’s working hard with his teammates in the summer league, which plays games a few times each week.

“Last year was my first year playing soccer and I played JV,” Keen said. “I just go out and do what I can. This year, I think they’re moving me to defender, so I’m trying to learn that. Running around keeps you in shape, but I’m having fun with it.”

Soccer is fun. Baseball is life. And this year, Keen had a very fun life.

The pitcher was a first team All-Catholic selection and he played a huge role in helping the Raiders improve from a 4–8 campaign last year to an 8–4 season this year, a year that ended in the Catholic League semifinals.

The ace of the staff certainly came through for Ryan, but he points out it wasn’t just talent that led the team to more success.

“I think the biggest thing was we had a better attitude as a team,” said Keen, who finished 3–0 with a 2.62 earned run average. “We didn’t play as individuals, we played more as a team, we played for each other.

While Keen’s spring season was great, it did end of a bit on a down note when he pitched an inning for the Catholic League Carpenter Cup team in a 20–5 loss to Suburban One League American and Continental Conference in South Philadelphia.

It wasn’t the way Keen and company wanted to go out, but the experience is still one he’ll remember.

“Baseball is a funny game, we wanted to represent the Catholic League, but we had a bad inning and it turned a closer game into a really bad one,” said Keen, who pitched one inning and allowed a run on two hits against the all-star lineup. “We wanted to win and advance, but it’s still a fun time.

“I had fun because I was playing with guys I played against all year. I knew a couple of them, but they’re cool guys. And I liked learning from new coaches. (Joe DeBarberie) from Bonner-Prendergast coached us and he worked with me on a new pitch. The more you can learn from, the better you’ll be.”

He’s a member of the Bucks County Generals, a team that plays tournaments in front of scouts. The games are more about showcasing the players’ talents than trying to win games, and Keen estimates he’ll play about 40 games during the course of the year. Most of the games are on weekends.

“Last weekend, we were at Bucknell and it was pretty cool because behind home plate, there were 20 scouts with their radar guns,” Keen said. “It’s a showcase. We all work together, we all have the same goal of getting better and going to college. My goal is to get into college and maybe get some money for college. If I can do that through baseball, great.”

While Keen certainly has come a long way in terms of talent, he believes the bulk of his success comes from the work he puts in.

It also explains why he’s looking forward to spending his summer, working at Ryan.

“I think the job is a lot like the way I play on the field,” Keen said. “I know I’m going to have to work hard in this job, but I like doing it. I work as hard off the field as I do on it. I think that’s why I’ve improved this year.” •• 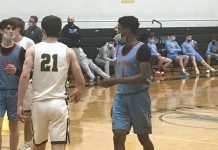 Where to find the Northeast Times