Michael Porter, Anthony Valeno and J.J. Costello have been friends since childhood, when their developmental disabilities brought their families together for support and companionship.

Back in July 2015, the guys moved into their own home together on Jackson Street in Torresdale with support from the nonprofit SPIN Inc.

The move has gone well, and last August, their parents and SPIN caretakers got even more peace of mind when Comcast surprised the guys with free Xfinity Home service.

“We didn’t know about it,” Valeno said of the visit.

“We pulled together ‘A” squad technicians,” said Jeffrey Allen, Comcast Cable’s senior products manager. “It was a fun day. It’s worked out well.”

The residents have tablets, an X1 set-top box and touch-screen capability. They have voice remote service, meaning they can say, “Put on the Flyers,” and the hockey game will appear on the screen.

The guys have been cheering on the Eagles while watching their nice television.

The men can set up rules that prompt them to turn the lights on and off, open doors, notify the police, water the flowers, get ready for work and take out the trash.

“We don’t have to use keys anymore,” said Valeno, noting the keyless entry pad.

SPIN believes that the men have improved their independent living skills and relationships by interacting with the technology. The technology has also allowed them to build skills for more meaningful employment opportunities.

“It’s worked out perfectly for them. They’re picking it up with no problem. It’s second nature to them. And their families feel so much safer,” said Dan Fuller, SPIN house director.

SPIN owns the home, and the occupants were happy even before the Comcast-installed additions.

“It’s a nice house, and the neighbors are good,” Valeno said.

Porter, 30, who was on a family cruise when the Times visited the home, is a custodian at the Naval Support Activity base, 700 Robbins Ave.

They are among 265 people in 99 SPIN-owned homes in the Philadelphia and Lehigh Valley areas.

SPIN owns the house, and provides 24-hour in-home assistance. The employees drive the residents to work, bus stops, malls, the movies and SPIN events and facilities. They handle home upkeep and make sure the guys are eating nutritional meals and improving their independent skills.

Comcast and SPIN have had a longstanding relationship, with the cable company helping launch a computer literacy lab at the agency’s headquarters.

Allen describes the work on Jackson Street and a similar job at a school for the blind as “feel-good” days.

Allen likes being able to give peace of mind to the men’s parents.

“There’s a certain level of comfort,” he said.

The residents are thankful to Comcast for the entertainment and security upgrades. 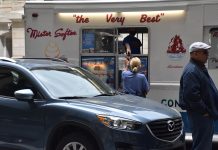 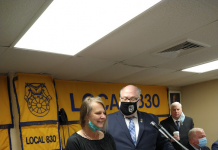 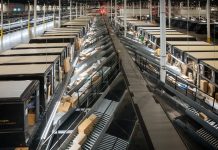