The Grey Lodge Pub has been a staple in Northeast Philadelphia for more than two decades, and owner Mike Scotese announced a new brewery that will help keep it that way.

Settling down at a table in Grey Lodge Pub, customers can clink glasses with Rosie the Riveter, a deer and its hunter, or a number of cartoon characters. Mosaic tile characters gradually started lining the walls of the dimly lit Northeast Philly staple last year, when Mike “Scoats” Scotese started his project to line the walls.

“In late 2015, a group of people were taking their picture, and I realized there was no big logo for them to stand in front of,” said Scoats, who has owned the pub for the past two decades. He created a logo out of tile work in the empty space between the two bathrooms in the back of the pub.

“If you have one, you need to get another one,” he said. The project ballooned from there, with Scoats incorporating some of his favorite pop culture figures like Fry from Futurama or real-life figures like artist Frida Kahlo.

On one level, it was a fun way to freshen up the beer joint, which in its more than two decades has become an establishment known around the city.

But on another, more present level, it addressed a concern Scoats has about the bar industry itself.

“No one really needs a beer bar anymore,” he said. “Beer is everywhere and there’s a bazillion different styles, and there’s no way to differentiate yourself anymore.”

Grey Lodge Pub follows simple guidelines to stay relevant: it has to stay a great neighborhood bar so that it remains a destination. But he’s not afraid to take a radical step beyond that.

On Nov. 11, Scoats announced he would open a microbrewery just a few doors down on Frankford Avenue. Once two licensing issues are worked out, Lucky Cat Brewing Co. will become Northeast Philadelphia’s first professionally licensed brewery. It could open as quickly as within the next six months.

“Craft beer bars are no longer the destination or the hot thing they used to be,” he said.

The tiny space will feature less than 20 seats. Brews created there will remain largely exclusive to the location, though Scoats said some of the brews would appear year-round at Grey Lodge or Hop Angel Brauhaus, another bar Scoats co-owns. He already has the décor planned out, too.

“We’re going for the low-budget industrial minimalist look,” he joked.

The move shouldn’t necessarily be seen as a surprise considering Scoats’ track record in the beer scene and Northeast Philadelphia. In 1994, he bought into the building and turned it into Grey Lodge Pub in 1996. He doubled down on the focus to include craft beer. By around 1997, the bar had opened 10 tap lines, which Scoats said was huge for the time.

“We were one of Philadelphia’s original beer bars,” he said.

It’s not just a destination for beer. The unconventional, often-changing bar menu also draws a crowd, whether they’re hungry for the pub’s classic Lodge steak, which has been filling bellies with fried salami, roasted pepper mayo and cheese sauce since 2005, or hoping to try an item from the specials. The specials can range from typical bar foods to foreign cuisine. Scoats said he lets the chefs create their own dishes inspired by their own backgrounds. 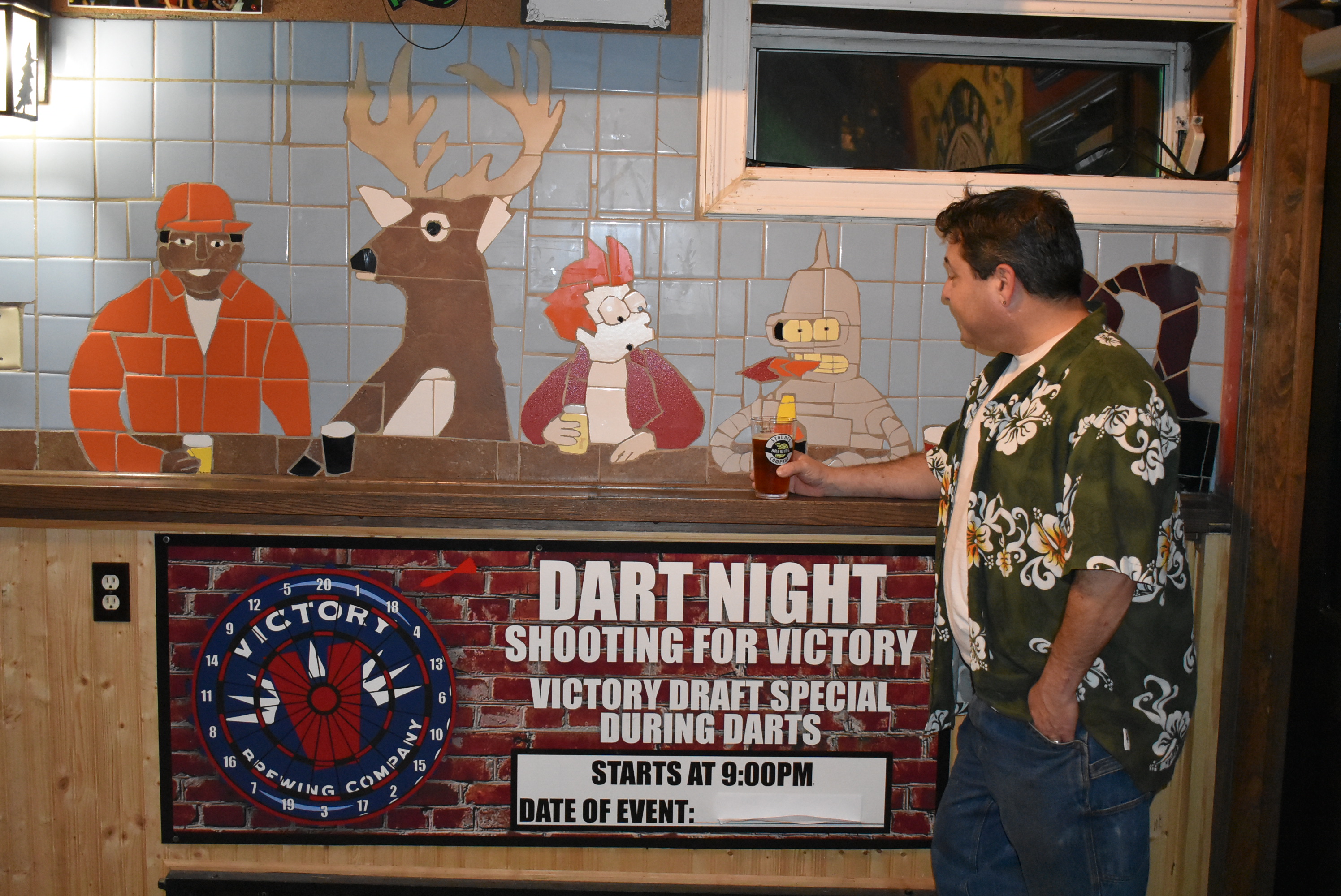 There’s no such thing as a top-selling beer thanks to the constantly transforming draft selection, but customers looking for a familiar taste can enjoy canned favorites like Miller Lite.

“When we started doing craft beer, to me it wasn’t an either/or thing,” Scoats said. “We had an old-man corner bar in the middle of the block. We could definitely add craft beer, but no reason these two things can’t coexist together.”

Scoats said the size of the crowd fluctuates depending on the night, but the pub has a regular crowd of people who live locally and people who travel to enjoy the beer, food and company.

“In 25 years, all I know is that you open up the doors, people show up or they don’t,” Scoats said.

Fortunately, they do. The Armstrong family used to stop by once a week or more when they lived close to the pub for 15 years. They moved away a couple of months ago, but when they were back in Mayfair the night of Nov. 9, they had to stop in to the place that had become a family tradition.

“I’ve been coming here since before I would have a memory of it,” said Michael Armstrong, a junior in college who was dining with his parents, Joe and Susan. Eating at the pub had become a tradition for four generations of the Armstrong family. The craft beer and food menu kept them coming back.

“We love the fries, double dunked,” Joe said. The chefs will dip the fries in oil twice if you ask. “The specials are as good as the high-end restaurants you’ll see on Broad Street.”

A few years ago, Scoats said he wanted the bar to become a classic place. The Inquirer compiled a list of classic eateries in the city a few years ago, and the pub made the cut.

“That was where I was hoping after all these years we were headed to,” he said. ••