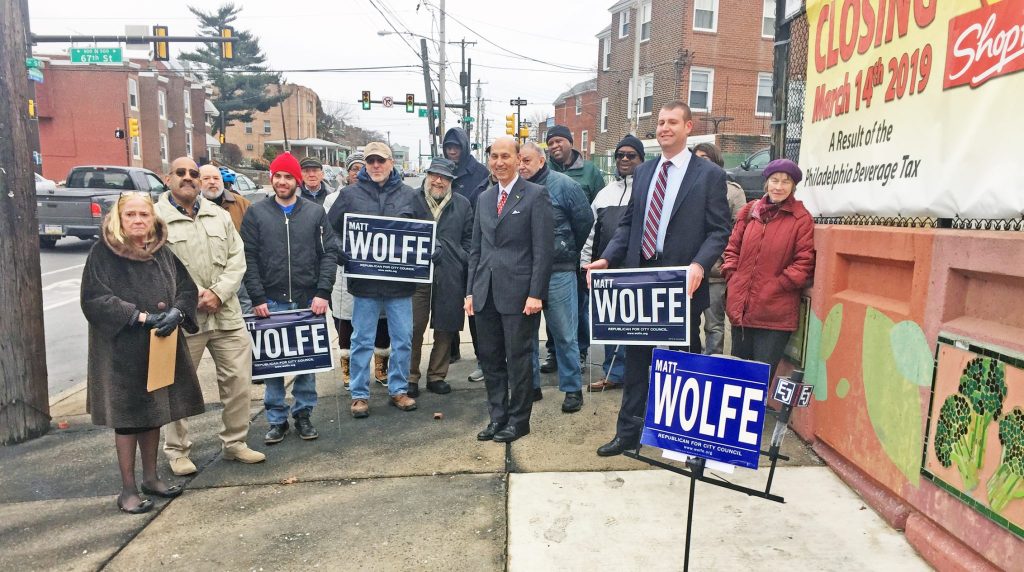 Matt Wolfe on Saturday morning announced his candidacy for City Council at large in the Republican primary on May 21.

Wolfe held the announcement at the ShopRite at 67th Street and Haverford Avenue in West Philadelphia. The location was chosen because the store, close to the border with Montgomery County, will be closing on March 14 due to lost revenue because of the city’s beverage tax.

The candidate also blamed the 8 percent sales tax in Philadelphia and the city’s cigarette tax for chasing consumers to the suburbs. And he said city regulations hurt business.

If elected, Wolfe said he’d be a “loud” voice for common sense.

“Somebody’s got to speak up,” he said.

As an example, he was a leading voice in 2017 against the city’s proposal to change the way it picks vendors for contracts, no longer bound to the lowest responsible bidder.

“Of course it should go to the lowest bidder,” he said.

Among those at the announcement were ward leaders Chris Vogler and Mike Cibik.

Wolfe is a Penn graduate, lawyer, ward leader and West Philadelphia community activist. He is a former deputy attorney general who also served in the administration of Gov. Tom Ridge as the chief counsel of the Department of Labor and Industry. Before that, he was assistant counsel at the Department of Transportation and a special prosecutor in several counties. In Philadelphia, former District Attorney Ron Castille appointed him a special assistant district attorney to represent the city in closing down nuisance bars in his neighborhood.

Wolfe, married with two adult sons, is former vice president of the Spruce Hill Community Association and was a member of the 18th Police District Neighborhood Advisory Committee and vice chairman of the Woodland District of the Boy Scouts of America. He is active in his parish, St. Francis de Sales, and has served on the parish pastoral council and as a eucharistic minister.

In the primary, Republicans and Democrats each nominate five candidates. Independents and third-party candidates are eligible to run in the general election.

Wolfe will be joined on the GOP ballot by Bill Heeney, who has already announced a bid; Councilman David Oh, who will announce his re-election bid Feb. 12 at the Union League; and Councilman Al Taubenberger, Dan Tinney, Irina Goldstein, Drew Murray, Steven Vaughn-Lewis and Carl Lee Johnson Jr.

City Councilwoman Maria Quinones-Sanchez (D-7th dist.), who is seeking a fourth term, will hold a fundraiser on Thursday night at Printfresh at Jasper Studios, in Kensington.

Quinones-Sanchez, chairwoman of the Council Appropriations and Licenses and Inspections committees, faces a tough primary challenge from veteran state Rep. Angel Cruz in the May 21 primary.

In 2015, Quinones-Sanchez took 53.5 percent in the primary against a relative unknown in Manny Morales. The incumbent’s big margin in the 23rd Ward, home to Frankford and Northwood, saved her job. ••