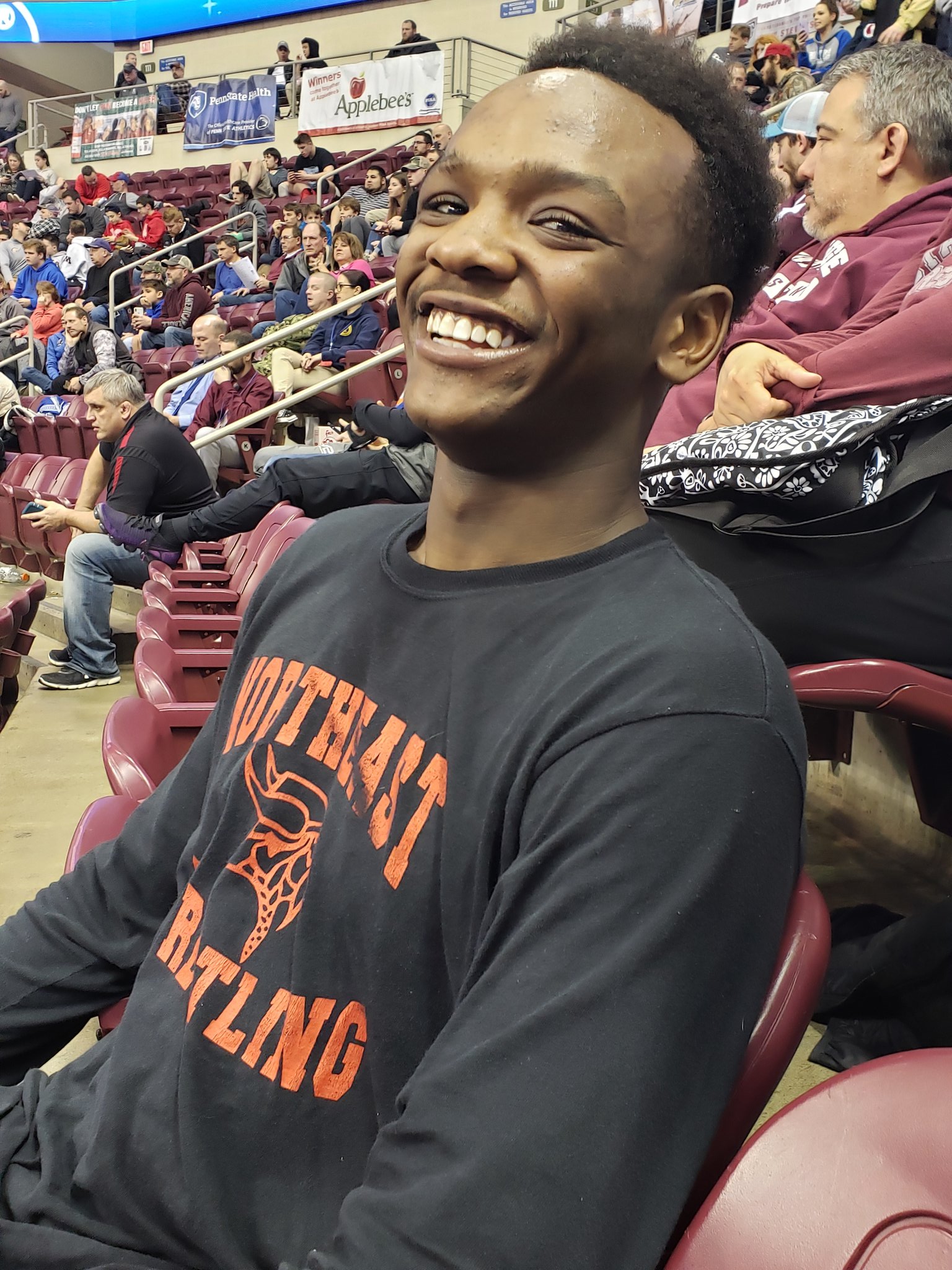 And, obviously, the state didn’t know what to expect from Coles.

The Northeast High School senior 195-pound wrestler put forth a tremendous senior year, piling up 40 wins heading into the PIAA state tournament and finishing second in the regional tournament.

But for all his success, he never competed at Hershey before.

Coles wrestled for Phelps School as a freshman and didn’t compete during his sophomore year. Last year as a junior, he wrestled, but a concussion suffered the week before he was set to go to Hershey was the end of his season.

This year, he had his sights set on a strong showing, but he knew going in he was facing a brutal bracket.

But one thing Coles has learned was never listen to outsiders.

“The one thing I knew about going to states was when you’re there, anyone can beat anyone,” said Coles, who lives near his school. “I knew going there that I could lose any match. But I also knew I could beat anyone. It was going to be hard for everyone because only the best are there.”

That’s exactly what Coles did.

After dominating his first-round opponent Luke Montgomery, of Bethel Park, 11-4 to advance, Coles pulled off a massive upset, knocking off top seed Cole Urbas, of State College, 8-7 to assure himself a medal. Urbas was previously undefeated and is headed to the University of Pennsylvania to wrestle for the Quakers.

He then lost two matches, an 8-7 decision to Kyle Swartz, of Northern York in the semifinals, and a 13-7 defeat to Max Shaw, of Thomas Jefferson, before ending the weekend with a 3-1 overtime win over Damen Moyer, earning a fifth-place medal and at the same time avenging his first loss of the year at regionals.

For Coles, it was the perfect way to end a great season.

“Right before I wrestled (Urbas), I was told he hasn’t wrestled a full six minutes all year,” Coles said. “I knew I had to just go after him and wear him out. I just kept coming and coming and coming. He was tired. He wasn’t used to wrestling six minutes. It’s because he beat everyone early.

“When I got to Hershey, it was weird because I never wrestled in a place like that, with so many great wrestlers, in front of a crowd like that. But once we started, I just wrestled. I wrestled like I did all year. I just went out and did what I did every other match.”

As an individual, this was by far Coles’ best weekend of the school year, but he’s been nailing down major accomplishments since the school year started.

During the fall, he starred at offensive tackle and defensive end for the Vikings and helped them win a 6A Public League championship. For his efforts there, he was named the Most Valuable Player of the 6A division in the Public League.

He then immediately traded in his helmet for his headgear and guided Northeast to a Public League wrestling crown.

He’s leaving Northeast with quite a legacy, and that’s something he’s very proud of.

“I wasn’t just representing myself in Hershey, I wanted to represent my school, my team, Philadelphia and District 12,” Coles said. “Anyone can come from District 12 and win. Once you get there, it’s all about wrestling. We wrestle hard. We had some good wrestlers represent us.”

Coles now has to decide which sport he wants to represent his college in next year.

When football season was coming to an end, Coles was leaning toward that sport, but after his tremendous winter on the mats, he might have changed his mind.

He’s open to either, or in a perfect world, not making a choice.

“Honestly, I would love to do both,” said Coles, who wants to major in sports marketing or sports management. “I love both. But if I had to make a choice? This might make football coaches mad, but I love wrestling.

“After this weekend, I feel like anyone can put football pads on and play. It’s a hard sport, but wrestling is so much harder. To go out there and wrestle another person for six minutes. It takes everything you have.”

Before he has to make a choice, he’ll have some time to bask in the glory of bringing home a medal.

Prior to this year, the only Public League wrestlers to have done it are Northeast grad Slav Mukha, who placed seventh during his senior year in 2006, and Miles Lee, a South Philly wrestler who took fifth two years ago.

“I don’t look at it as history, I just wanted to go out and wrestle,” Coles said. “On the inside, I’m so happy, but on the outside, I’m really tired. It’s hard wrestling that much. But it was worth it.

“I’m not sure how I’m going to celebrate. I’m not sure if I’m even going to take the medal into school. But I didn’t do this alone.

“My coaches, both Coach (Mike) Siravo and Coach (Kraig) Feldman helped me the whole way. They got me ready for this. They really helped me. It wasn’t just me.”

Father Judge 120-pounder Eamonn Logue also made the trip to Hershey and while he didn’t place, he did pick up a pair of wins.

He defeated Chander Ho, of DuBois, 5-0 in a pigtail match, then fell to Will Betancourt, of Manheim Central, 4-2, in the first round. He recovered to knock off Corey Cope, of Quakertown, 5-0, but then lost to Cameron Enriquez, of Stroudsburg, 6-5, which eliminated him from competition.