Eagles Pro tight end Zach Ertz has one goal as a player and for his team, and it’s simple: Finish on top, No. 1…nothing else will do. 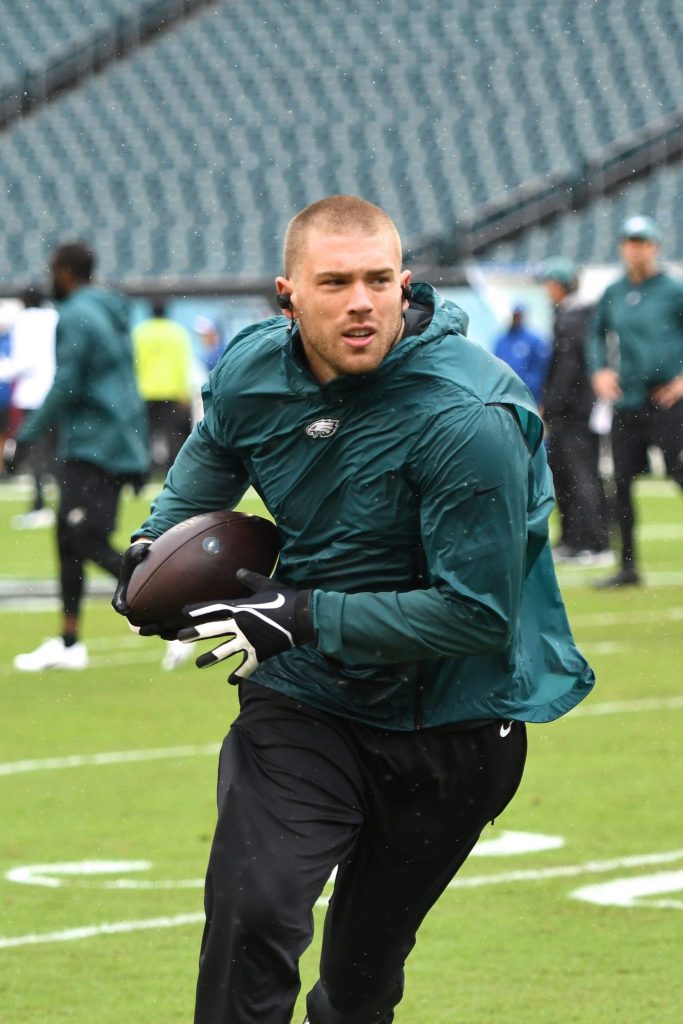 “I want to be viewed as one of the best tight ends,” Ertz said recently during a small gathering of reporters in the Media House on the grounds of the NovaCare Complex. “I said my rookie year — and I can’t believe it’s been seven years – that I want to be one of the best to ever play tight end not only in this organization but…ever.”

If that wasn’t clear enough, the 28-year old got more specific.

“My goals are always going to be first-, second-team All-Pro every year,” Ertz said. “It just comes down to laying down that foundation right now. I’m laying a foundation starting April 15, putting full bricks together to build this house of a season. It’s not easy. I didn’t feel great when the season ended last year, so I really had to start from scratch when the offseason started, rebuild my body again, and go from there.”

Ertz, to be sure, is well grounded. If you are around him during the season, the 6-foot-5, 250-pounder believes the better he plays, the more catches he makes, the more touchdowns he scores, the better the odds the Eagles will play better and wins are significantly increased.

Ertz talked about the 2018 season when the Birds, led by Nick Foles, won their final three regular season games and grabbed a Wild Card spot, defeated the Chicago Bears in that round before losing a close game to the New Orleans Saints.

“There were really good moments and there were some poor moments,” Ertz said. “Very indicative of the team. I kind of judge my individual season based off the team’s success and failures. We didn’t have a good enough individual regular season, so we put ourselves behind an eight ball. In the playoffs, there are things I can do better. Today, we met for the first time in the offseason and it was very clear that we played well as a tight end group but there is a lot of room for improvement. That’s going to be the offseason this year, focusing on how I can become a better player on the field and also become a better leader off the field, helping some of these new guys. We’ve got a lot of talent on offense, and it’s about piecing it all together the right way. ”

One of the things Ertz talked about was coach Doug Pederson’s tweaking the offense this season with some new two-tight end packages – with Dallas Goedert. The 24-year-old is heading into his second season after getting drafted by the Eagles in the second round of the 2018 draft out of South Dakota State. The 6-4, 260-pounder caught 33 catches for 334 yards and four touchdowns.

“We feel that we have a really good tight end room,” Ertz said. “Not only with myself and Dallas but with a guy like Richard Rodgers, who didn’t really get a chance to show what he can do last year with his injury. But in terms of that package, we think it’s something that can be successful. Bringing a guy like DeSean Jackson in, safeties have to really, really respect him. The guy’s got a long history of burning guys deep, and so we feel there should be, in theory, more space in the middle of the field because of a guy like DeSean Jackson.”

Ertz went on to say Goedert is the perfect complement to his game.

“Dallas is a guy that I think is going to be a really good player in this league for a long time,” Ertz said. “He’s a really good blocking tight end. I don’t think anyone thought he was going to be that kind of advanced in that department when he first came into the building but he really showed flashes of being a really good blocking tight end and he can make plays when the ball’s in the air…he’s big, he’s athletic. So having two tight ends that we should be able to move around in formation, and defenses aren’t able to key one, should be a really beneficial thing for us but it’s all good in theory and talking about in early April. We have to work these next two months, really focusing in on how to perfect on that two-tight end personnel grouping and being as dynamic as it can be.”

Of course, the guy who must play well to make this all happen is quarterback Carson Wentz. This is certainly the toughest offseason Wentz has ever experienced. He has missed the end of two consecutive seasons with injuries. He has watched, from the sideline, as his backup led the Birds to incredible runs, including the first Super Bowl win in franchise history. He has had his leadership on this team questioned.

Foles has moved on to lead the Jacksonville Jaguars. Ertz was asked what he thinks Wentz needs to prove.

“The guy’s done it all,” Ertz said. “Obviously, he’s been one of the most dynamic players in the league when he’s healthy. Was he 100 percent last year? Absolutely not. The guy had a broken back early in the year. I don’t know if he knows exactly when it happened. He’s just trying to be the best quarterback he can be for this organization. We’ve had a lot of team success in the postseason. His goal is to lead us to that and lead us a long way. He has lofty goals from an individual standpoint within this organization and there is not doubt in my mind he’s going to be able to achieve those goals.”

Ertz was asked again about his status among NFL tight ends. In 2018, he set the NFL single season record for receptions for tight ends with 116. 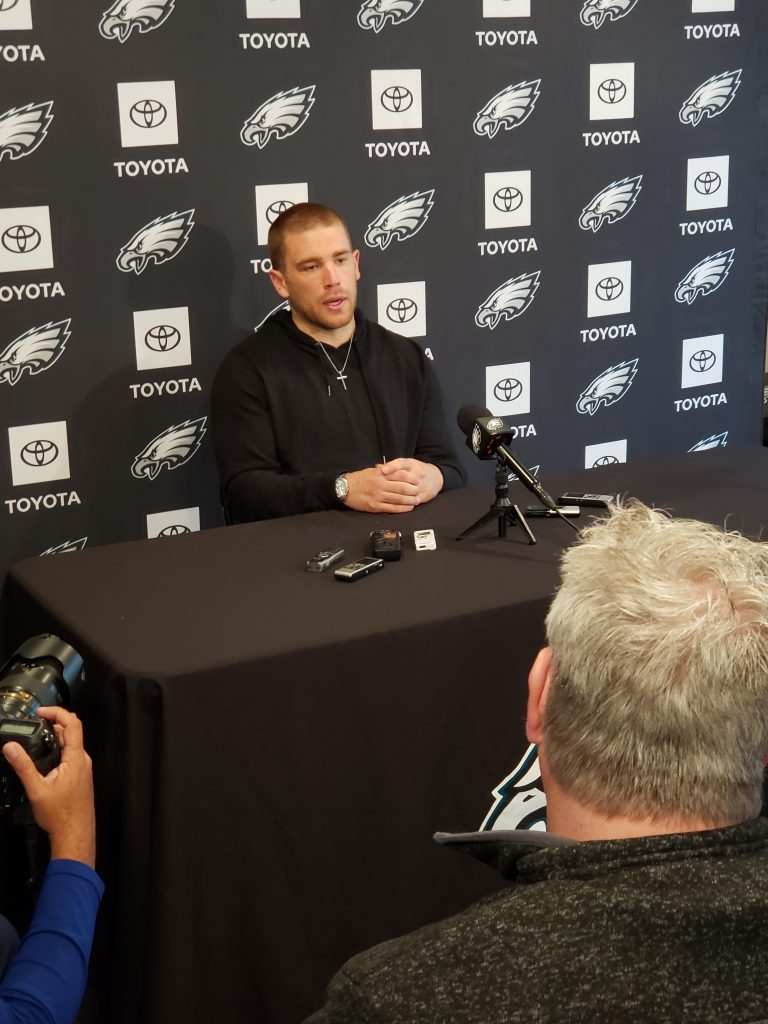 “I think I’m up there towards the top, I would think,” Ertz said. “I have a big chip on my shoulder, for sure. There was a lot of times this offseason, I don’t pay too much attention but people are saying there’s one or two guys that are better than me. My goal is always to be the best. So, I definitely have a huge chip on my shoulder this year. I’ve been working extremely hard back at Stanford, training my butt off to become a better player. We have lofty goals as a team, and I do as well from an individual standpoint. It’s going to be an exciting year, for sure.” ••