Sean Daniels is coming back to the Soul to play his fourth Arena Football League season. He is not getting paid what he should, not even close.

So why is he back?

“The love of the game, I love to play football,” said Daniels, who played college ball at Temple. “I love to hit, I love to tackle. I’ve been doing this since I was 4 years old. I just love football.”

Daniels said his early season-ending injury made him realize how passionate he was for the game.

“Being out last year, I thought I left a lot on the table,” the 27-year-old said. “A lot of questions unanswered. I sat out the year with a huge chip on my shoulder, so I wanted to play. That’s driving me, to get back to not necessarily prove a point but to more or less…to play the game. I love it. That whole year off, it just left a bad taste in my mouth.”

The Soul did not make it to the ArenaBowl last year. The team finished tied for second at the end of the regular season (7-5) but was seeded third in the playoffs due to the AFL tiebreak procedure. The Soul then lost both games in their aggregate score semifinal series against the Baltimore Brigade.

Daniels would not point to his absence as the reason for the Soul’s early exit.

“There’s no one person bigger than the team,” Daniels said. “The Soul were winning before me and they were obviously winning games after me. It was just an unfortunate break in the playoffs with that scoring system. It was a funky year for the league. But we are going to go out and try to repeat 2016 and ‘17. My contributions in the year we won again, it definitely helped, but we had a whole team. I’m just trying to get back to that point and surpass it. I want to be one of the veterans on the D-line and pick up right where I left off.”

The Arena League was down to four teams last year. It did not look good. But through the efforts of former Eagles quarterback Ron Jaworski, longtime owner of the Soul, the league has expanded to six teams, giving the league that has been in existence for over 30 years some badly needed credibility.

The Soul open the 2019 season Saturday at the Wells Fargo Center against Atlantic City (3:30 p.m.).

Daniels says he does not care how big the league is, he just wants to play.

“Six teams, four teams, two teams…it doesn’t matter to me. Put the ball down, line up, we’re going to hit. That’s all that matters.”

Offensive guard Neal Tivis echoed his teammate’s thoughts on why he returned to play again.

“I was going to hang it up at the end of last year, I think I’ve said that a few times, but, man, it’s hard to walk away from something that you love like that when you can still kind of do it.”

Having a team like the Soul to keep asking you to come back helps keep the fire burning.

“For sure,” Tivis said. “Especially when you have an organization like this. It’s like family. It’s kind of hard to walk away from family, too, especially when they need you.”

Tivis was asked about players from the Alliance who were literally left out in the street when the league folded after just eight weeks of play. Some players had to borrow money just to get home.

“For sure,” said Tivis, who, it appears, dedicated a lot of his offseason to the weight room. “It’s hard to even fathom thinking about if something was to happen here. I know they’d help me get home. You know?“

Unlike Daniels, Tivis was glad to see the league expand.

Like Daniels, Tivis has the same feeling of unfinished business.

“That’s part of the motivation to come back, too,” Tivis said. “We went out, and I thought we were pretty good at the beginning of the season, but it didn’t go how we thought it was going to go. At the end, I kinda had the feeling like, ‘Let’s run that back.’ Let’s go again with close to the same core with a few changes here. We’ve got some new guys, which is good.” 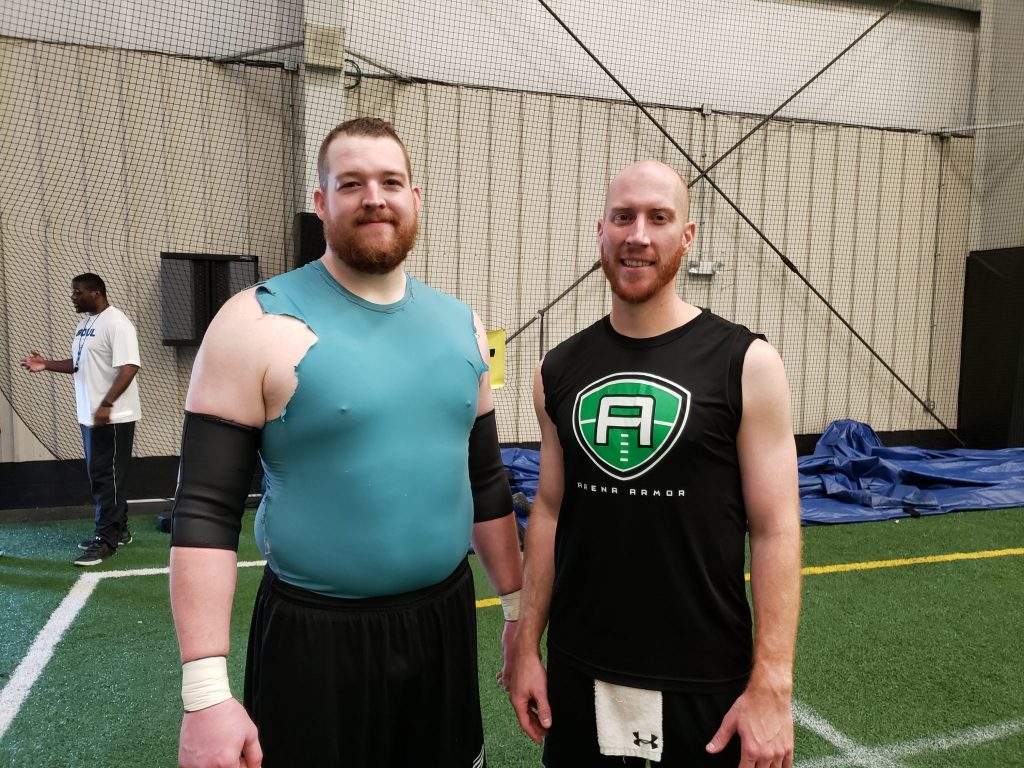 Quarterback Dan Raudabaugh has been playing in the Arena League since 2010, for the Soul since 2012. He has championship rings and a league MVP on his resume.

“A lot of things,” Raudabaugh said. “This is an opportunity to play a sport that you love. With guys you’ve built great relationships with…you get a chance to compete. In the daily world, there’s not always opportunities where your competitive nature can come out and you can let it shine. It can rub people the wrong way in certain areas in life, too. But this is a wonderful opportunity you want to take advantage of while you can.”

Raudabaugh said he knows playing sports does not go on forever.

“Everyone’s got a certain number of snaps, and you’re going to run out of them,” the 32-year-old said.

Raudabaugh was asked if watching what happened to the Alliance players make him appreciate the Jaworski organization even more.

“For sure,” Raudabaugh said. “It’s not just Ron Jaworski, as wonderful as he is. It’s all the people like (Jim) Foster, who started the Arena Football League. This is the second-longest-running (pro) football league in American history. Besides the NFL, we’ve been going longer than anybody. Even though its footprint isn’t as large anymore it’s been around, it’s survived.”

So Raudabaugh and his veteran teammates press on to see where it ends. ••