When things don’t go your way, people will tell you to “make the best of it.” That is what former Archbishop Wood standout offensive tackle Ryan Bates appears to be doing as he enters his NFL career as a rookie free agent.

It’s not the way it was supposed to for the 6-foot-4, 306-pounder who just concluded a successful career at Penn State. Bates chalked up 35 starts and helped the Nittany Lions win the Big Ten title in 2016 as a redshirt freshman starter.

Most draft pundits had Bates being drafted at some point, but it did not happen.

Making the best of it for Bates was having choices of where to go based on where he has the best chance to succeed.

When the Eagles offered him an opportunity to compete for a roster spot, he jumped on it. The Warrington, Bucks County native said it was still a tough weekend to sit and watch the draft.

“It was really stressful,” Bates said at his locker after the first day of rookie camp. “I waited to get a call. I waited Friday, Saturday…three days. I had family and friends over on Saturday. There were a few times it happened where I saw guys get their names called, and I might have questioned who they were. But my agent called, and several teams were interested, and one of them was the Eagles.”

Bates said he did his homework. And he is a lifelong Eagles fan. He was aware of the injury situation with the aging future Hall of Fame left tackle, Jason Peters, as well as the torn Achilles of Pro Bowl right guard Brandon Brooks, who may or may not be ready for the start of the season.

With that knowledge, Bates said his choice was easy.

“After the draft, I knew I was coming here,” Bates said. “I talked to my agent, and we both decided the Eagles was a good spot for me.”

Bates then got specific.

“Here, the offensive line, they have some injuries, some people getting older,” Bates said. “It’s a good opportunity for me to come to an organization and try and make a name for myself.”

Bates said he has experience at both tackle and guard. Many observers think his NFL future is on the interior side of the ball.

“Right now, the focus is at tackle,” Bates said. “But whatever position, if they want me to play center, guard, it doesn’t matter. I just want to be the best player I can be.”

The Eagles will have competition for interior line spots. The Birds signed three other undrafted free agents in that area, but Bates should have a chance since he can play multiple positions.

Someone asked Bates if he would like to talk to center Jason Kelce about how to climb the mountain. In 2011, he was a sixth-round pick out of Cincinnati and went on to become the best center in football.

“Absolutely,” Bates said without hesitation. “I’ve yet to meet him, I haven’t had the privilege yet. I’m looking forward to learning a lot from these guys.”

What does he want to accomplish in this mini-camp?

“I just want to play fast,” Bates said.” And try and make a name for myself.”

He has two Penn State teammates on the Eagles rookie roster in second-round pick Miles Sanders, a running back, and defensive end Shareef Miller, drafted in the fourth round.

Bates said he has stayed in touch with his high school coach, Steve Devlin, and the two communicated after he signed with the Birds. He said he knew Devlin was a good enough coach to move on to college football.

Bates was a big part of that success. He helped the Vikings win back-to-back PIAA Class AAA titles in 2013 and 2014 with a combined record of 28-2. Bates was named the 2014 Pennsylvania Football News Lineman of the Year

“I knew at some point he would want to move on to the next level,” Bates said of his former coach. “I’m happy for him.”

Philadelphia is part of Bates’ blood. He attended the Eagles’ NFC championship game after the 2017 season against the Minnesota Vikings at the Linc, then watched the Birds go on to win the Super Bowl.

“I went to the NFC championship game,” Bates recalled. “I was out on the street high-fiving people.”

Bates is now a professional. He was asked what he would say as a 12-year-old who learned he was picked up as a player by the Philadelphia Eagles. Bates laughed and exclaimed, 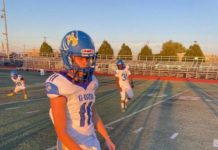 McClain comes up big for Washington 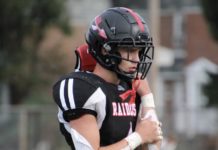 Brunelli throws his weight around to help Raiders 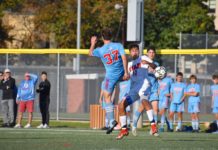