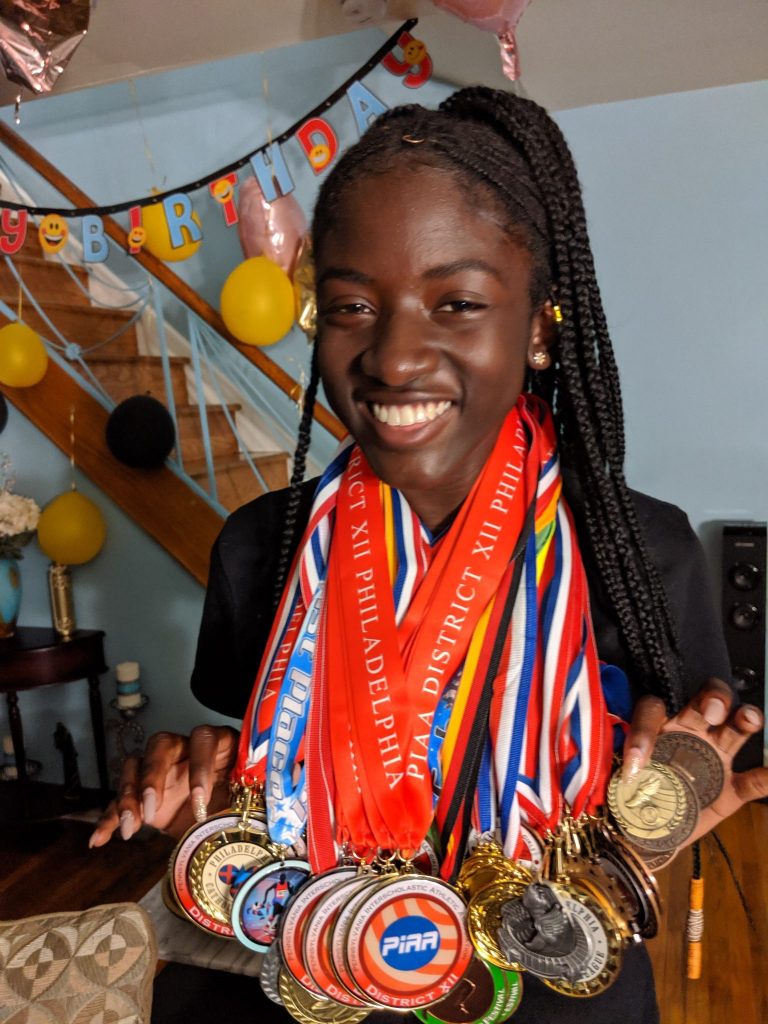 Kelsey Sebwe has been reaching new heights all season.

Both on and off the track.

Sebwe is a junior on the Archbishop Ryan High School track team, and she’s been collecting medals since the season started. But she’s also been making noise in the classroom, where she’s an honor student and a honcho in student government.

“I decided to run because I wanted to do it for my senior year,” said Sebwe, who will be the student council vice president for her senior class. “There are a lot of things I want to do, I want the students to help decide how we do things. I want to plan dances and do things for the school.

“I love the school and I like representing it.”

That’s exactly what she’s been doing for her entire career as a Ragdoll.

Sebwe has been a star on the indoor and outdoor track teams since she enrolled, but this year has clearly been her finest.

And her best days have been in the biggest Catholic League meets of the year.

During the winter season in Catholic League indoor track championships, she won Steve Smith Most Valuable Female Field Performer for her achievements in the hurdles, the long jump and the triple jump.

She followed it by doing the same thing in the spring season, winning the Most Valuable Female Field Performer in the outdoor season.

Now she has more medals than she can count, but it all started with a silver medal when she was a freshman.

“The medal that means the most to me is my second-place medal I got when I was a freshman,” said Sebwe, who lives near Welsh and the Boulevard and got her start in track at Maternity BVM Grade School. “That’s when I knew I could do well. I knew I could push myself to win.”

This year, she’s been almost unbeatable.

At the Catholic League championships, Sebwe won the 300-meter hurdles with a time of 46.70, the long jump with a jump of 17-4 and a triple jump of 36-2 as she led the Ragdolls to a second-place finish behind Neumann-Goretti.

Last week, she continued her winning ways, bringing home a pair of gold medals and a silver in the District 12 championships.

Competing against the best in the Catholic and Public leagues, Sebwe took second in the 300-meter hurdles with a time of 46.77, while winning both jumping events. She won the long jump with a leap of 17-2 ¾ and the triple jump with a 36-2 ½ jump.

Because of her success in districts, Sebwe will compete in both jumping events this week in the state track meet at Shippensburg University.

Sebwe is looking forward to competing against the best in the state, but she’s no longer just going to see where she measures up against the elite. She’s now among the elite.

“I’m really excited about going, especially because I was told if I do my best, I have a chance at placing,” Sebwe said. “It shows that all the hard work I’ve put in is paying off. I know how hard I’ve worked.”

Sebwe credits her coaches, both current and previous, for helping her get where she is. She also says her teammates push her to be a better athlete. And she also says her family has been influential in her improvement, especially her sister Kel-Lisa, a 2016 graduate of Ryan who is now on the Duquesne University track team in Pittsburgh.

“She really pushed me, we work out together a lot and whenever she can, she comes and watches me,” Sebwe said. “I’ve been out to watch her. She’s a runner, she’s more of a runner than I am. That’s what she does. But she’s taught me a lot. She taught me you really have to work hard.

“We didn’t run together at Ryan, but we did when we were on different teams in grade school. She’s really good, and she helps me a lot.

“My mom is a big influence, too. She’s not in track, but she’s my biggest supporter. She comes anytime she can.”

Sebwe hopes to follow in her sister’s footsteps by competing in college, though she’s leaning toward staying local for college.

But she knows that before she goes to college, she has a lot of things left to accomplish at Ryan.

A medal at states would be the perfect way to finish her junior year before she turns her attention to her final season. And she plans on working hard all summer to make sure she continues to improve.

“I might play volleyball in the fall because I don’t play a sport and that will help (with jumping),” Sebwe said. “I still can get better. I have great coaches. If I keep working hard and trying to get better, I think I can be even better next year.”

It’s all about reaching new heights.