When her dad died and her mom decided to move back to Philadelphia full time, she bought their vacation home in Jim Thorpe, Carbon County, about 85 miles north of Parkwood, where she had been living. She’s been there since 2002.

Shorten has worked for seven years as sexton at St. Mark’s & St. John’s Episcopal Church. She describes the church, which was designed by Richard Upjohn and is listed on the National Register of Historic Places, as the crown jewel of Jim Thorpe.

“It’s magnificent. It’s Gothic Revival. The architecture rivals something you would see in Europe,” she said. 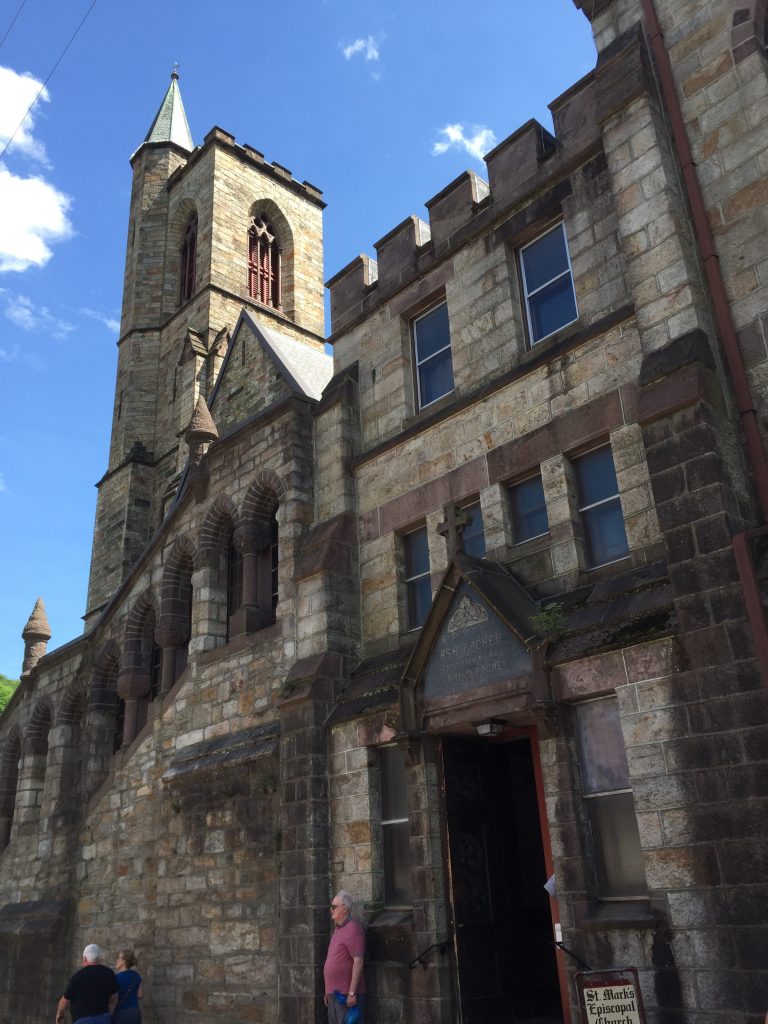 Shorten, though, was concerned about a plan by the Carbon County commissioners to build a 50-spot parking garage and office building. Originally, the project would have included excavation of 40 feet of the bedrock formation of Flagstaff Mountain. The church’s foundation is built into the mountain.

Work could have threatened the basement wall and some of the valuable and irreplaceable 1890s-era Louis Comfort Tiffany stained glass windows.

“That’s receiving a lot of backlash,” Shorten said of the original plan. “We are actually built into the mountain. If they disturb that mountain in any way, the church glass could be broken and the wall destroyed. Once the damage is done, it’s done.”

Andrea L. MacDonald, director of the Pennsylvania State Historic Preservation Office, wrote a letter to Carbon County Commission Chairman Wayne Nothstein, noting that the U.S. Department of the Interior has designated the church as a national historic landmark. There are 176 such landmarks in Pennsylvania and about 2,500 nationwide.

MacDonald urged the commissioners to proceed with caution, writing that the church is an important part of tiny Jim Thorpe’s resurgence as a tourist destination.

Commissioners had said the project is necessary because of insufficient public transportation and a lack of parking in the borough. Jim Thorpe is the county seat, and the parking garage would have been close enough to the courthouse that employees could walk to work.

Commissioners stressed that no dynamite would have been used during excavation.

More than 1,600 people signed a petition against the project on change.org.

Shorten and her allies appear to have won.

Commissioners seem to be scrapping the parking garage proposal and scaling back the office project, deciding to renovate an existing building. Work has been pushed to next year.

Joining Shorten in opposition to the project was Diane Prokop, a fellow Ryan graduate who is the innkeeper at the Times House Bed and Breakfast, next to the church. Prokop was a Northeast Times reporter from 2005-10.

Prokop credits Shorten with rallying opposition to the project.

“Mary leads with her heart,” she said. “There is no way she would let anything happen to this church.”

Prokop wants the commissioners to stay committed to leaving the church site alone, adding that a study incorporating long-term planning will push them in another direction.

“We’re hoping they move to a different spot. We believe there are plenty of other spots,” she said.

The project had been at a standstill anyway because Shorten and others filed an appeal against the borough in Carbon County Common Pleas Court. A statewide court was to appoint a judge from outside the county to hear the appeal. Though the county has moved away from its original plan, the plaintiffs are not dropping their suit in case commissioners change their mind.

Project opponents were pleased with the outcome of the May 21 primary, since three of the four nominees for commissioner on the Republican and Democratic tickets had expressed opposition to the new office and garage on the campaign trail.

The new commissioners will take office at the start of 2020.

“This time, we’ll make sure there is stakeholder involvement,” Prokop said.

Shorten, meanwhile, made a successful last-second bid as a write-in candidate for Jim Thorpe Borough Council, and her name will appear on the Republican ticket in the general election. ••