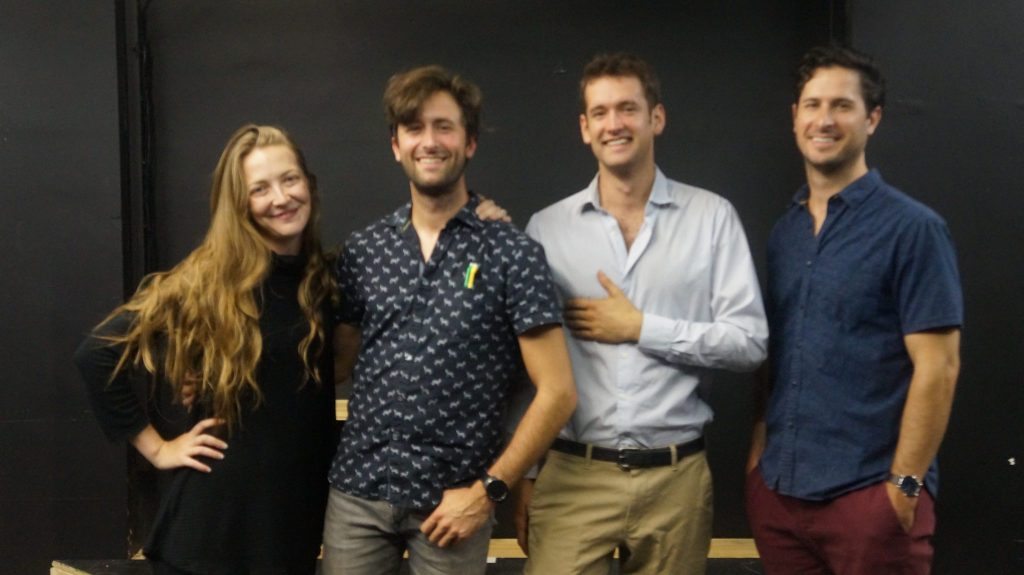 When Mayfair BID and Wings of Paper collaborated to open the Mayfair Theater, Wings of Paper artistic director John Cambridge said one of their goals was to introduce the community to art that wouldn’t otherwise be displayed in the neighborhood. Since it opened in March, the theater has brought several shows and showcases that highlight the artistic strength of the neighborhood and city.

The theater’s success continues with Constellations, which previewed Aug. 1 and held its full debut the following night. Starring Kristin Devine and Kevin DeJesus-Jones, the two-person show explores beginnings, ends, reunions and heartbreaks of one relationship – split up in 77 vignettes across multiple different timelines.

It’s a show that belongs in a tiny black box theater like Mayfair’s – the two actors use just themselves and space in the middle of the theater to perform, forgoing set pieces and props. Lighting changes and sound effects signal a timeline shift, making the potentially confusing premise simple to follow. The intimacy of the theater allows for quieter character moments, such as a gentle laugh or muffled sob, to resonate with audiences on a much deeper scale than a bigger Broadway stage allows.

These are strengths Devine and DeJesus-Jones lean on. The play opens with the two characters, Marianne the theoretical physicist and Roland the beekeeper, meeting at a picnic. “Do you know it’s impossible to lick your elbows?” Marianne asks as a conversation starter, and the rest is history – or not. In several of these timelines in the beginning Roland reveals he is already in a committed relationship – when this happens the timeline stops, the actors reposition themselves and the lighting shifts color before the scene restarts, this time with the circumstances altered. This warms the audience up to the idea of shifting timelines (and elbow-licking attempts) before the story truly starts.

When they happen upon a timeline where the characters can become romantically involved, the relationship progresses and the audience learns more about them. Roland is a beekeeper (“How do you make money off of that?” Marianne bashfully inquires) and Marianne is a cosmologist, often wondering aloud about string theory and the belief that every choice creates an alternate dimension.

It’s this crumbling of conventional story structure that allows DeJesus-Jones and Devine to fully explore their characters. Typical narratives see characters making and being defined by their choices. Here, both get to play the instigators of a break-up, the loyal partner accepting the other for their mistakes. They both fall in and out of love depending on the vignette, giving the audience a full 360 look at their character while letting the actors fully dive into their performances.

A couple soon to be married in real life, Devine and DeJesus-Jones fully commit to the characters. Their performances are so intimate it makes the audience feel they’re spying on a real relationship. The emotion is visceral – whether it’s the anger of a fight in the bedroom or the butterflies before a marriage proposal, the actors make their multiple journeys feel fully-lived in. The 77 vignettes fly by in about 90 minutes, and even as timelines stop and start, the short play feels like a journey of a fully realized lifetime.