City Councilman Bobby Henon believes he deserves re-election when voters go to the polls on Tuesday.

“I am engaged, I work hard, I’m out in the community and I’ve done the job from day one,” he said.

The councilman declined to answer questions, on the advice of his lawyer, related to his federal indictment on corruption charges. 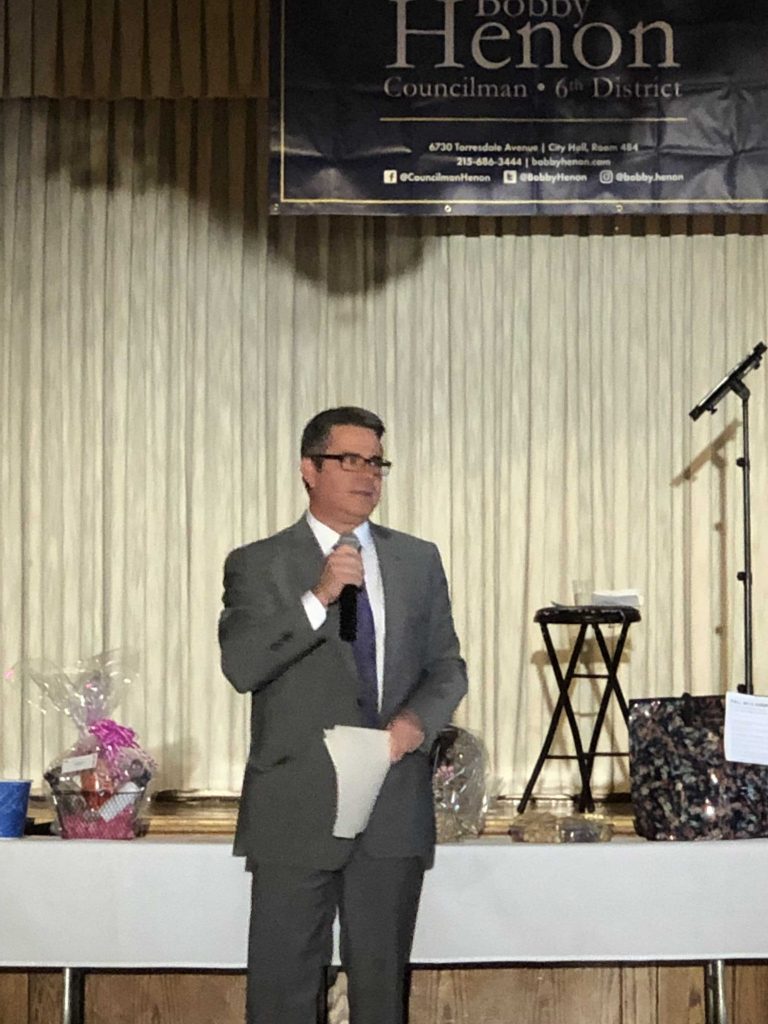 Elected in 2011, Henon said his district office at 6730 Torresdale Ave. enables constituents to work with his staff without having to go to Center City. They can also text and call the same number, 215-686-3444, for service.

Henon chose the Torresdale Avenue location because he thought that area of Tacony needed some tender loving care.

“Our neighborhoods are doing good,” he said.

Henon, a Wissinoming native now living in Torresdale, voted for the beverage tax while opposing a property tax hike and supporting a homestead exemption that is now up to $45,000 and has led to a tax decrease for some homeowners.

“I will not vote for raising any property taxes,” he said.

Henon believes the beverage tax has been a success. A ShopRite opened recently near Harbison Avenue and Bridge Street, and existing supermarkets are hiring, as are the local Pepsi and Coca-Cola plants.

Revenue has resulted in 3,000 pre-kindergarten seats, he said, a figure that is growing.

The money collected, he said, has also gone to much-needed renovations at recreation centers. Eight playgrounds in his district have been overhauled, he said, and there are “more to come in the future.” Tens of millions of dollars have come to the Council district.

“Parks and recreation are important to me,” he said, adding that the facilities offer security cameras, lighting, Wi-Fi and programs for senior citizens, students and special-needs children.

Henon was happy to be part of the negotiations that led to Dietz & Watson rebuilding in Philadelphia after a fire at a Burlington County facility. The deal also led to plans for a riverfront park in Bridesburg.

To make it safer for senior citizens, he pushed the city to allow residents to place their trash at the curb at 5 p.m. (instead of 7 p.m) from Nov. 1 to March 31. He has an upcoming hearing on a bill that would label crimes against seniors as hate crimes.

The councilman is eager to see construction beginning at the former Liddonfield Homes housing project. Coming will be senior living and a life center, along with sports fields for Holy Family University.

“We were able to put partners together,” he said.

As for the new elementary school coming to the Abraham Lincoln High School campus, he believes it is needed due to population growth, overcrowding at existing schools and aging school buildings. He sided with neighbors who did not want the school near Rowland Avenue and will be with them as a community benefits agreement is finalized.

“I am absolutely on the side of the community,” he said.

The city police and firefighter unions have endorsed Henon, who is looking forward to a new 2nd Police District headquarters coming next year to 7306 Castor Ave.

Henon said he opposes Philadelphia’s sanctuary city status, though he believes it is mostly a federal issue.

The councilman, 23 years sober, wants more funding for early-intervention, opioid-addiction treatment and public funding to erase the stigma associated with being an addict.

“I am opposed to any safe-injection site,” he said.

Henon offers training for the public on the use of Narcan, which can reverse a drug overdose. He sponsored a bill requiring pharmacies to carry Narcan. He’s also worked with Dana Ritchie’s Never Give Up – Heaven Will Wait to assist addicts.

If re-elected, he plans to run for another term as Council majority leader.

“Northeast Philadelphia deserves a seat at the table, and that would be me,” he said. ••