This year should be much better.

The high school basketball teams that play home games in Northeast Philadelphia didn’t win any championships last year. In fact, none made the championship game. But there were highlights for all of them.

Archbishop Ryan won a game in the state playoffs. Both the Raiders and Father Judge qualified for the playoffs in the Catholic League. And in the Public League, we had some 10-game winners and many teams experienced some good times.

This year should be better.

In the Catholic League, both teams are improved and while it’s always tough to make noise in the PCL, both could have a say in February.

The Public League should be very competitive, too. Abraham Lincoln has the most talent, along with a new coach, and its goal is a championship. But Northeast, George Washington and Fels also have high hopes, while Frankford is young, but the players are learning quickly.

Tacony Charter also has some talent, and Franklin Towne Charter is learning on the go.

Here is a look at the local teams.

Last season, the Raiders saw their championship run ended by Moon Area in the second round of the PIAA 5A boys championship tournament. Moon would go on to win the championship, though that wasn’t much consolation for the Raiders.

This season, head coach Joe Zeglinski is preparing for a long season, not because he thinks his team will struggle, but because he is planning to still be playing basketball well into March.

The Raiders’ roster is a blend of experienced returning starters and eager underclassmen.

Aaron Lemon-Warren burst into the starting lineup last year as a sophomore, and finished second in scoring on the team. The forward earned Third-Team All-Catholic honors, along with guard Gediminas Mokseckas. Mokseckas, a Division I recruit, returns for his senior year, as does center Christian Isopi.

As a sophomore, Dom Vazquez played his way from the JV squad to the first man off the bench for the varsity team. This year, expect to see plenty of the hardworking guard.

Vazquez fits in perfectly with a team comprised of hardworking, dedicated players.

“Our group has a team-first attitude and are very close on and off the court,” said Zeglinski. “We will focus on the small details and win each of those by the day.”

While Ryan has plenty of experience, it also has youngsters ready to step in. Guards Jalen Snead, David Wise, Luke Boyd and Mike Kryszczak, and forward Rob McConnel are ready to contribute.

“Understanding their roles and their unselfish play has me very optimistic about this season and beyond,” said Zeglinski. “We have an MVP candidate in Aaron, combined with a couple of the top guards in the league who all play off each other well.”

The Raiders are strong offensively, with the ability to score from anywhere on the court.

The team is also rich on defense, with the luxury of switching their lineup or speed based on their opponents.

The Raiders look primed to go deep into the playoffs, but whatever happens, they will have fun doing it.

“They have been a pleasure to be around,” said Zeglinski. “This team has bought into our winning culture, and I am very grateful to be leading the Ryan basketball program.”

For a young team, the Father Judges Crusaders had an impressive showing last season. The team finished 10-13 and made the playoffs, where they lost to Archbishop Carroll in the first round.

The inexperienced underclassman of last season are now juniors with both varsity and playoff experience under their caps.

One of those players is Nasheer Johnson. As a sophomore, Johnson finished 13th in scoring in the Philadelphia Catholic League. In a league loaded with talent, that’s quite an accomplishment. Coach Sean Tait expects even bigger things for Johnson as he matures as a player.

“(Our strengths) are guard play and the development of our big men,” said Tait.

At 6-foot-8, Rymir Shaw certainly qualifies as a big man. The junior center returns to roam the low post, and is also a reliable scoring option. Guard Aidan Dooley, who quarterbacks the football team, was one of the Crusaders’ leading scorers last year. The Crusaders will need to account for the loss of Shane Dooley, one of Judge’s all-time leading scorers, who graduated.

The Crusaders also return a trio of seniors in guards Nick Minich, Angelo Colon and Matt Comas, who will see time at center and forward.

The Crusaders’ other key players include juniors Justin Blythe and Colin Joyce, and sophomores Jordan Reinhart and Jalen Flowers.

“The sophomores are now juniors and hopefully the playoff experience will help us take a step closer to the Palestra,” said Tait.

The Railsplitters, on the heels of a state championship run the year before, loaded up on a great schedule last year and finished 10-18. The tough games they played last year should help this year as the team hopes to have another strong run in the Public League and beyond under first-year head coach Jamel Lindsey.

The Railsplittlers should be strong up front, too, with center Oluwdara Idowu and forwards Shamir Williamson, Malachi Owens and Aymere Thomas.

Lincoln will be without one of its top players, Dahmir Fowlkes, as he recovers from a torn ACL, but the junior will be back for his senior year.

Size, speed and experience, the Railsplitters have what it takes to make a deep run into the playoffs if things go their way.

“This past summer with all of the work the guys put in, it’s paying off,” Lindsey said. “My goal is for every one of my players, the seniors, to play college ball. Doesn’t matter what level, as long as they get an education.

“Record wise? I don’t have a prediction, but I think this is the most talent we’ve had, one through 13 since I’ve been here for the past five years. We have some really good players.”

The Pioneers struggled last year, finishing 13-14, but an almost brand new group of players will represent Frankford this year.

Coach Jamie Ross is doing his best to teach team basketball, and they’re working hard thus far to pick up the system.

The team will be led by forwards Izayiah Adams, Brandon Moore and Jarik Baker.

Frankford should also be strong in the backcourt with Ruferse Escoe, Chris Sumter, Chris Sherman and Jaquan Lawson seeing time at guard.

It will be a rebuilding year at Frankford, but Ross expects results, and he’s happy with what he’s seen thus far from his inexperienced group.

“I’m happy they’re starting to pay attention and put what we’re teaching them into results,” Ross said. “We don’t have many guys who have varsity experience, just three returning guys and only two played, but they’re learning. We need to keep learning and keep getting better.”

Franklin Towne Charter finished 3-18 last year, but things are looking up this season.

Coach Nicholas Ruggieri declined to give any names for the preview, but he does like what he sees from his squad.

“We are a group of young men who play together as one and understand that hard work and determination will pay off in the end,” Ruggieri said. “Our goal is to play every game to the final whistle. We want to run the floor and have energy both on and off the court.”

Last year was a good one for the George Washington Eagles. The team finished with a 13-9 record, an improvement over the previous season’s 8-15 showing.

Then the playoffs happened. The Eagles lost in a heartbreaker to Frankford by just two points (58-56).

This year the Eagles, behind head coach Jeremy Beatrice, return with a renewed vigor.

“I have high expectations for the team this year,” said Beatrice. “Hopefully, (we’ll be) bringing home a Liberty division regular season title and earning a couple home playoff games.”

For the Eagles, now is the time to fly high. The team reruns five seniors who are ready to go the distance before graduation. Kyier Smith, who plays forward, was named to the All-Public League 2nd Team last year. The senior captain was the team’s leading scorer last season, and also second in rebounding.

Forward Levon Brown returns for his third year as a starter. Brown led the team in rebounds and blocks last season. Nyreese Moore was second in scoring last year and first in three-pointers. The Eagles also rerun James Ramsey, who can play both guard and forward, and Mike Butler, a three-year starter at guard.

Despite being loaded with talented players, Beatrice understands the team’s strengths and weaknesses and will game plan around them.

The Eagles will also focus on creating turnovers, as it gives the team the best scoring opportunities.

While the competition is tough in the Public League, the Eagles have unlimited potential as long as they play their game.

“It won’t be easy with a lot of strong teams in our division,” said Beatrice. “But if our guys remain committed, the only team that can beat us is ourselves.”

The Northeast High School Vikings are in an enviable position this season. This year’s squad hits the perfect ratio of experienced veterans and talented newcomers, and of staunch defenders and scoring threats.

The Vikings concluded last season with a disappointing 2-14 record, but head coach Steven Novosel is eager to avenge the anomaly and get back to the double-digit wins the team has profited for most of the decade.

“I expect great things from this year’s team,” said Novosel. “Our guards are skilled and talented. And we can be dangerous when we are able to play for one another.”

The Vikings will look to a pair of seniors to lead the way. Point guard Kyle Hines is the team’s most skilled player, according to Novosel, and a natural leader on and off the court. While guard Amir Shields is a natural athlete who plays three varsity sports, his work ethic is second to none. Shields was the team’s second-highest scorer last year, after David King, who graduated, leading the Vikings in three-pointers (27) as well as steals (32).

The Panthers didn’t have a great season last year, going 8-10 overall, but considering the team was full of new players, the undermanned team held its own. The Panthers made the playoffs before losing in the first round, but growth was evident every day.

Many of last year’s players have moved on, but Fels coach Mark Heimerdinger comes into the season optimistic. The Panthers are young, but have skill and players who are willing to put in the work. 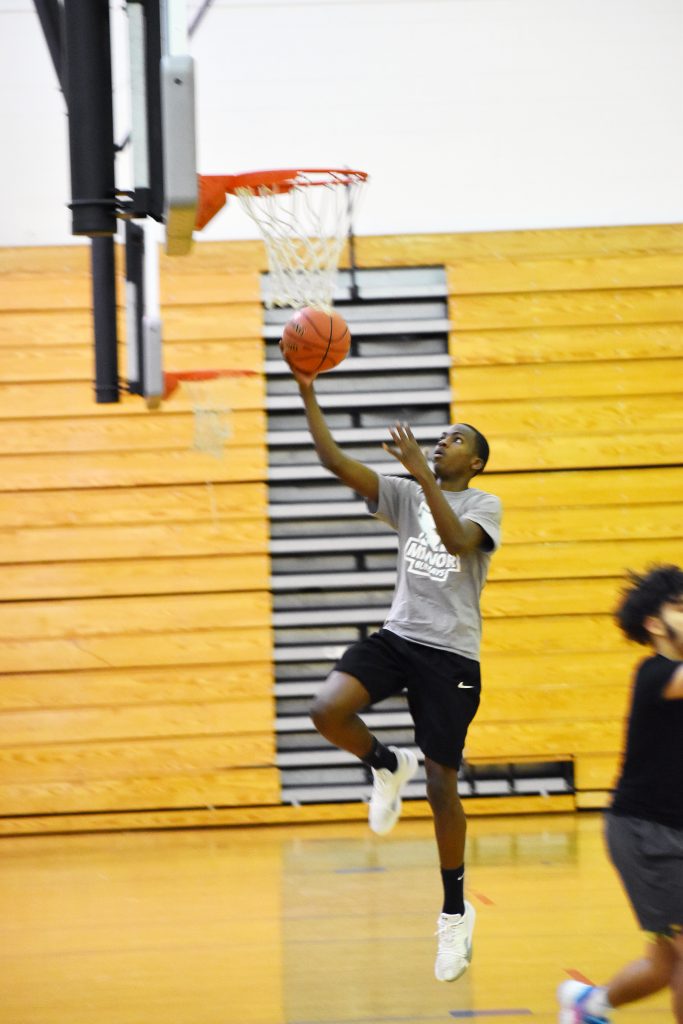 Leading the way will be senior captain Oliver Beauvoir, who can play point but will primarily play shooting guard. Other players who will contribute to the team’s success are EJ Guzman, Chris Landers, Shareef Hall, Chris Lamonde, Issac Ceaser, Tylay Gaddy and Anthony Davis.

Heimerdinger knows what it takes to win, he has more than 500 career victories to his credit, and he thinks this year’s team could be a lot of fun, especially as they mature together.

“As of now, we are working hard in practice, learning how to play as a team and having players compete for playing time,” Heimerdinger said. “It’s a fun group to be around. It’s a group of neighborhood kids who enjoy playing together and they are doing what we ask.

“It is my hope that the work ethic being demonstrated now continues during the season and leads to a successful season.” 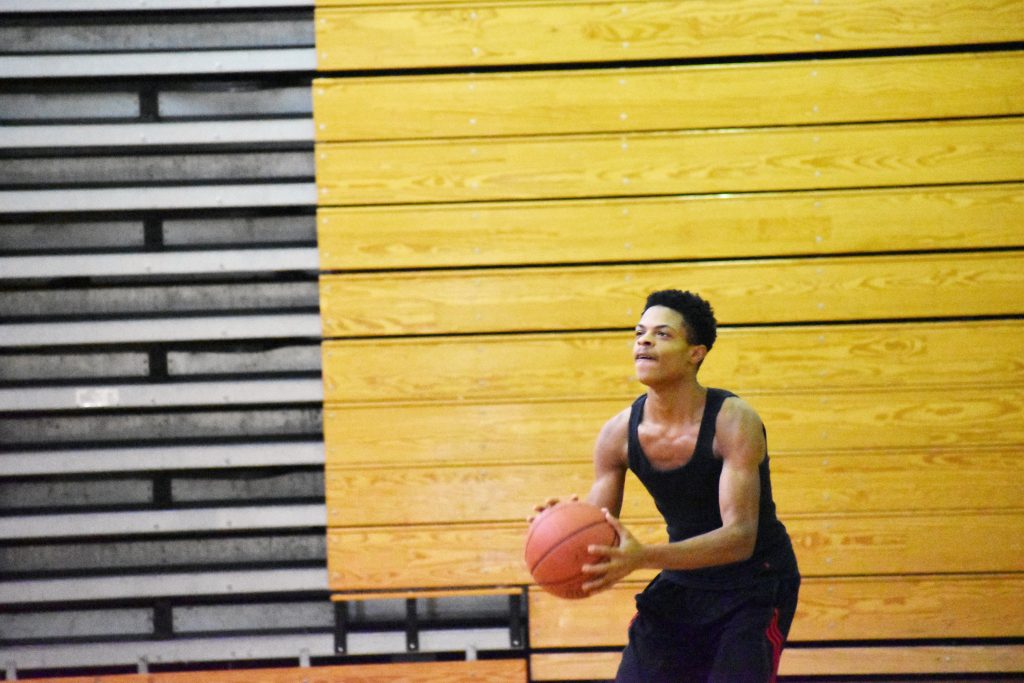 Last year, the Lions’ season was ended by a single point. The Lions fell 65-64 to Lincoln in the first round of the playoffs, finishing 8-13 for the season.

“With a year of continuity and experience under our belts we should take a step forward and compete for the National Division title,” said Mccurdy.

While the Lions are loaded on scoring threats, the team is far from one-dimensional.

“Our biggest strength is our team speed and ability to pressure the ball,” said Mccurdy. “We will turn defense pressure into offensive opportunities.”

DiVergilis learned a lot at Wood