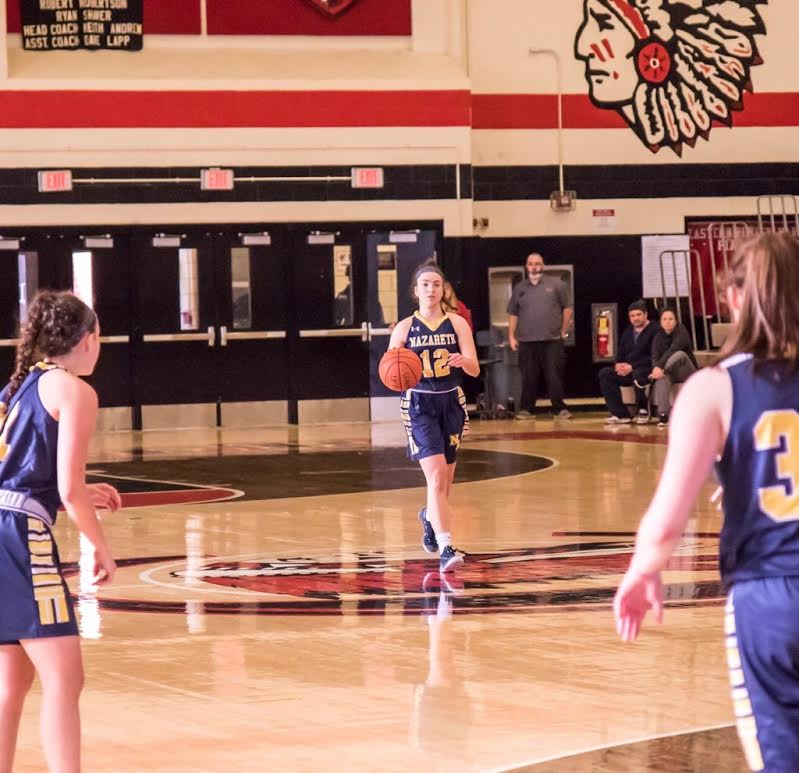 But she always had the attitude of one.

D’Aulerio is a senior on the Nazareth Academy basketball team, and growing up, since she was a great shooter, she would usually be the shooting guard. But when she arrived at high school, she was asked to make the switch to running the point.

It was a real challenge making the step from CYO basketball to high school ball, and it was even harder because she had to learn a new position, arguably the most challenging position to play on the court.

But it couldn’t have worked out any better.

“I never really played it at all because teams would have me shoot,” D’Aulerio said. “It’s a big difference. But now that I’ve been playing point guard, I love it. I think it’s my favorite position.

“I played like a point guard, in that I tried to be a good leader and I always wanted to get my teammates involved, but when you’re playing point guard, you have a lot of chances to do that. And we have players who can score, so it’s my job to make sure they get the ball and we’re able to run the offense.”

It helps that for the first time in her career at Nazareth, the team has consistency at head coach.

D’Aulerio had a new coach for the first three years of her high school career. This is Mary Kate Magagna’s second season as coach at the school, and it’s helped D’Aulerio quite a bit.

It probably doesn’t hurt that Magagna, formerly McDade, was a star point guard at Nazareth and later St. Joe’s University, so she knows exactly what it takes to be a good point guard. And she’s quick to pass on that knowledge to her star.

“I love playing for (Magagna), she is always helping me and telling me things to do,” D’Aulerio said. “It was hard when we had new coaches, but since she got here, we’ve really made a connection.

We have great coaches now, but I think because she’s a point guard and we see the game the same way, it really helps me. She’s great to play for.”

So does the experience.

When D’Aulerio was a freshman, she took her lumps. But in doing so, she learned to play the tough position in a tough league. She learned more as a sophomore and even more as a junior. Now, it’s her team and she’s confident every time she takes the court.

“I’ve waited for this the whole time I’ve been here,” said D’Aulerio, who lives in Langhorne and spends her summer working as a coach at the Holy Ghost Prep basketball camp. “I want to be one of the players who helps others. I like showing people things.”

But she knows she still has a lot to learn.

It helped that when she took over, she was a sharp shooter because that certainly helps a point guard. And she’s always had a good handle. But this year, she’s working on becoming a point guard who can drive to the basket. Once she gets that down, she’ll be very hard to stop.

“I’ve worked with our coaches a lot with that because it’s definitely something I want to get better at,” D’Aulerio said. “I’m definitely getting better. It’s good if I can do that because then I can get it to teammates for shots, too. I want to be an overall good player. I’m working on all of that, and I’m doing it so we can get better, too.”

This year hasn’t started the way D’Aulerio and her teammates wanted it to, losing seven of their first 10 games. Injuries have played a role, but D’Aulerio believes things can turn around.

“We’re struggling a little bit, but we’re working really hard and things are getting better,” D’Aulerio said. “We have to get used to playing a different way. We’re not a big team, but we’re still getting better defensively. We’re working on some things that are making us better.”

It’s that attitude that makes D’Aulerio such a great leader and team player.

And it’s something that will serve her well next year when she plays at Ursinus.

“I went there to visit, not really for basketball, and I fell in love with it,” D’Aulerio said. “It’s close to home, not too far, but I can come home for a visit. It’s a great school, academically, I really like it, it felt a lot like Nazareth. It will be a challenge, but I love it.”

D’Aulerio, who plans on studying health science before possibly going into sports medicine, only hopes she loves her college as much as she does her high school.

“I love everything about Nazareth, it’s my second home,” D’Aulerio said. “It’s my second favorite place to be, other than my home. I love it. It’s where all my friends are, I love the teachers, it’s a great school for everything.”

D’Aulerio is in many different clubs in the school, including student council and National Honor Society leadership, and she’s a member of the Italian Club.

The fact she’s in the Italian Club might be a shock to some considering her grandfather taught French at Archbishop Ryan for many years. But if that surprises you, you’d probably be more surprised that she’s a basketball player instead of a soccer player.

“I was always around his games as a kid, I would go to so many games, I was there for his something hundredth win, I was young but I remember,” D’Aulerio said of her grandfather, George Todt, the all-time winningest soccer coach in Pennsylvania history. “My uncle played soccer, but my mom and dad didn’t, so I don’t think anyone was upset that I played basketball. I’ve always loved that the most.

“He’s very supportive. I’m lucky, I get great support from my whole family.”

Playoff teams have connections to Flyers

Wolf recommends no sports until next year