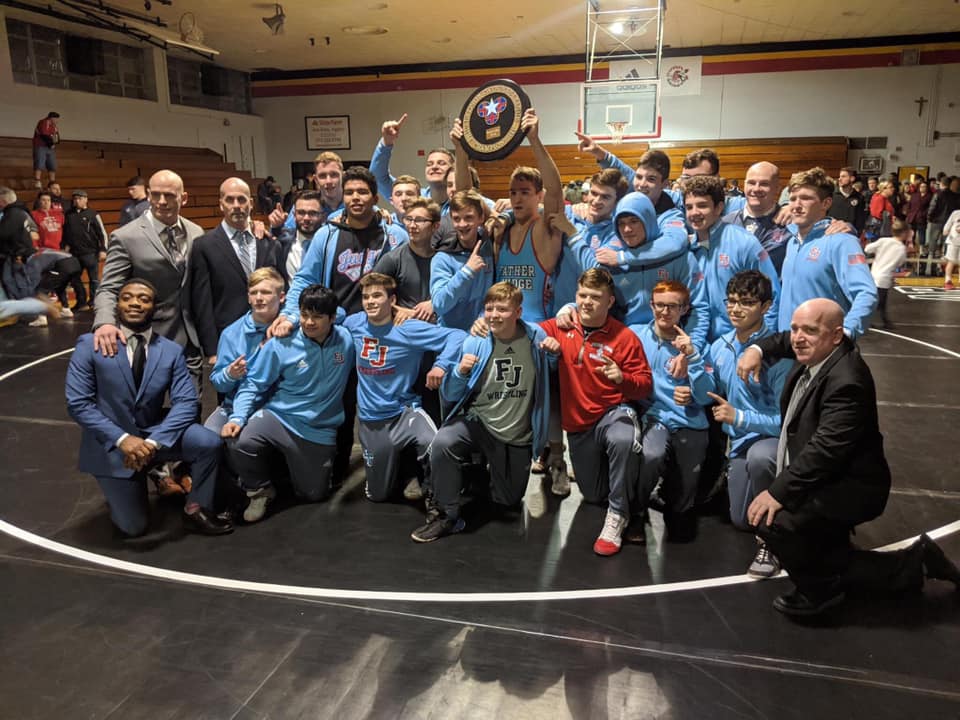 They had the perfect guy.

He just couldn’t do it. At least not at the time.

When Father Judge High School decided to add a wrestling program, they immediately turned to math teacher Jim Savage to gauge his interest in the job.

He was the perfect candidate. He loved the school and he loved the sport, but he couldn’t commit to being the school’s first coach.

He had work to do at his alma mater.

“When they asked me about it, I said I’d love to, but I can’t,” said Savage, a North Catholic graduate who led the Falcons to six championships as head coach, two as an assistant and two as a wrestler. “I said if I left North, I just couldn’t leave those guys. I said my house would burn down. And it would be my dad and my brother burning it down.

“I was teaching here, I love the school and the kids, but I couldn’t leave North. I couldn’t just leave them.”

Then North left him.

It wasn’t the school’s fault, in 2010, the Archdiocese closed the school. At the same time, Judge once again had an opening for wrestling coach. This time, Savage traded in his red and white for baby blue.

He may have left schools, but he kept the same philosophy and work ethic that made his team’s so successful at North.

Now, those efforts are paying off very well for the Crusaders.

Savage was proud of the turnaround, but it wasn’t because it produced a championship. It was because it showed the heart and determination his boys showed by clawing their way to a better result. Judge then went on to defeat Central 39-27 on Thursday in the District 12 championship.

“I tell them all the time, they’re not losing, they’re learning,” said Savage, who grew up in Port Richmond and lives in Fishtown. “We wrestle a tough schedule. We have a lot of young guys. They got beat up this year. But every time they wrestle, they learn. They get better. They put in the work.”

They put in the work, and they definitely got better, not just this year, but every year since Savage and his staff have taken over.

The coach refuses to take credit for it.

He’ll gladly praise his assistant coach Chris Cancelliere, his former teammate at North, who has been with him the entire time.

He’ll also talk all day about his other assistants, Joe Galasso, Dave Davidson and Cosimo Costa. Galasso won a state championship at Judge under Savage, and Davidson also wrestled for him.

And he will gladly talk about any wrestler in his program.

He taught his wrestlers well, and they have that Savage attitude.

“Wrestling for (Savage) has changed my life in a great way,” said Trevor Elfvin, a 2017 graduate who is now wrestling at Clarion University. “They helped me get to the level I’m at now. I’m proud of it. I talk to all of them. I’m proud to be a Judge guy and still a Judge guy.

“I’ll talk to Sav at least once a week or every other week. We’ll talk about the team, wrestling, whatever. When I was home during break, I was there every day. I want to be there because it’s a special place.”

Last Tuesday night, when his former teammates were wrestling for the championship, Elfvin was three hours away at school. But he was also matside thanks to his mom, Audra.

“I Facetimed him so he could watch it because he wanted to see what was happening,” Audra Elfvin said. “It means that much to him. I’m still a Judge mom. My son isn’t there, but it’s such a special place, I go to every match, home and away.

“If you want to know how to wrestle at a higher level, or even if you walk in to the program and never wrestled, you don’t have to, they’ll teach you. They’ll work with you. The transformation that those coaches can do with someone who wants to be there and willing to do, you don’t find that everywhere.”

The kids love wrestling for Judge because of the championships. And the Crusaders have been great, winning five of the past seven Catholic League crowns.

But the parents love watching their kids wrestle because of the success, not just on the mat, but off it.

Cormac Logue’s boys, Liam, Eamonn and Sean, all wrestled for Judge. Liam graduated last year, Eamonn is a senior this year and Sean is a sophomore.

The Roxborough natives were wrestlers before they were in high school, and when they were looking for a school, they knew the reputation of the school. It lived up to it and then some.

“I knew that wrestlers like Eddie Alvarez and Joey Galasso wrestled for the program, and I knew about North Catholic’s wrestling team, and Judge has been doing very well, too,” the father said. “I knew it was a far ride because from Roxborough, it’s a lot easier to get into Center City than it is to Judge, but we knew it was something special. They had something special going on there.

“It’s the wrestling, but it’s academics, too. I can’t say every wrestler, but I know there are four tracks and my sons are in honors. I know (Matt) Kidwell is in honors classes. And they all do very well in school because that’s something that they stress. Wrestling is fun, but the education is so important.”

It helps to have a math wiz as a coach.

“If Savage hears you’re having issues with a subject, he’ll work with you with whatever it is,” Audra Elfvin said. “Especially if it’s math, that’s his favorite, but whatever. They’re there for you. They check in with Trevor all the time, he’s two years out of there. You have former wrestlers back helping coach, giving back. It’s so special.

“You’re there for four years, but you’ll grow as a human being just being there. They are very straightforward, telling you what you should do and why you should do it. They want to make those boys become functioning men in society. They set you up to succeed.”

John Matthews is one of those success stories.

He wrestled for Judge before graduating in 2018. He’s now at Penn State, where his roommate, Eric Lindemann, also wrestled at Judge. They’re no longer wrestling, but they’re still using the lessons they learned.

“I applied for the ROTC program, but I didn’t get in my first year,” said Matthews, a two-time All-Catholic. “I then got it. I stuck with it. That’s something you learn from wrestling at Judge. You learn perseverance. You can’t give up in wrestling. You can use that lesson in life.”

That lesson has led to great things. It also means sometimes you won’t win, but you can get better in a loss.

“We always try to load up on tough schedules, we did it at North and when we got here, we didn’t do it right away, but we do now,” Cancelliere said. “We knew it would take a while here, it’s hard to get it started, but we just did the same thing we did before.”

Savage’s approach helps those when they go to college. It also helps guys who went in a different direction.

“Being with Jim in the North Catholic wrestling room from age 15 to 17 was what shaped and molded me into the competitor I am today,” said Alvarez, a former UFC lightweight champion and one of the most popular MMA fighters in the world. “I am never surprised to see his teams win. Winning is what Jimmy is excellent at.”

This year, the Crusaders didn’t start with a championship team, but that’s how it ended. Even after winning the Catholic League championship, which included three playoff victories, they sit at 10-7 on the season. But their losses are good ones.

“In the first one against Ryan, we got pinned eight times,” Cancelliere said. “This time, three. Those points are the difference right there. That’s because our guys fought off their backs. They got better. That’s how you win.

“Look at our guys’ records. We have a lot of losses. We don’t have great individual records. But if they’re getting better, it really doesn’t matter what their record is.”

The Crusaders wrestled West Chester Henderson, Council Rock North, Quakertown, Stroudsburg and Bethlehem Liberty. These were all losses, some lopsided. But in the end, it meant a Catholic League championship.

Savage isn’t the same kid who started coaching at North when he inherited the program from Billy Hunter when he was 24 years old. But the philosophy remains the same.

“The guys will tell you I’m a lot softer now, but as I got softer, we became more successful,” Savage said with a smile. “Now I don’t let the things bother me as much. And we change our approach. You can’t wrestle the same every year. I’m lucky to have guys like Galasso, who just got done wrestling in college. You tweak things. You change, you try to do some things differently.

“But the hard work you put in, that’s the same. Wrestling is a tough sport. You have to work at it. It requires a lot of work. If you don’t work, you don’t get better. It’s a hard sport.”

But you get out of it what you put into it. And Judge wrestlers get a lot out of it.

“It’s a brotherhood that will change a lot of things,” Matthews said. “It’s a huge part of my life. I’m very proud I wrestled for Judge.”

“I’m a lot better having wrestled for Judge and Sav,” Elfvin said. “I wasn’t tough enough. I came here, and they toughened me up. I’m still a nice guy, but I’m tougher now. And it’s helped me. It’s made me a better wrestler and a better person. Wrestling for Judge means something.”