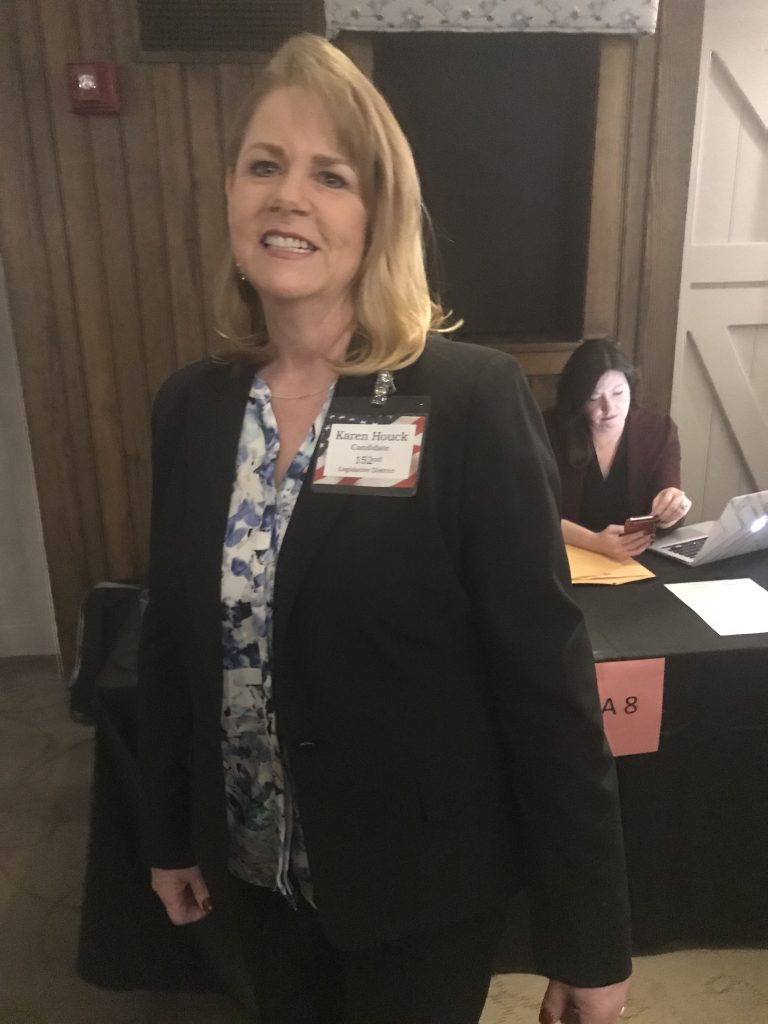 Houck is seeking to succeed Republican Rep. Tom Murt, who is not running for another term.

The district includes portions of Bustleton and Eastern Montgomery County.

The Philadelphia Republican Party will likely go along with the Montgomery County decision, since there are many more voters in the suburban part of the district.

The likely Democratic candidate is Nancy Guenst, the mayor of Hatboro.

In a letter to committee people, Houck wrote, “With your support, I am committed to extending outgoing State Representative Tom Murt’s legacy of putting people before politics.”

Houck and her husband, Charlie, have a daughter who attends the University of Tampa. She has a marketing degree and worked in the residential mortgage lending industry before becoming a full-time mother and volunteer.

Houck served six years (four as president) on the Upper Moreland Free Library Board of Trustees; became chairwoman of the Upper Moreland Revitalization Task Force in 2011; was a member of the Willow Grove 300 Tricentennial steering committee; was a board member of the Willow Grove Chamber of Commerce; was a Girl Scout troop leader; and graduated in 2015 from the Penn State RULE program for rural and urban leadership training.

In 2015, she won the Republican and Democratic primaries for a seat on the Upper Moreland School Board and was elected in the general election.

If elected state representative, her priorities will be increased funding for public schools; transportation and infrastructure; job creation; redevelopment; opposition to higher taxes; and protecting the environment, including addressing water contamination.

Sabatina could go through the primary and general elections without an opponent. He defeated state Rep. Kevin Boyle in a primary four years ago by less than 700 votes.

Back then, FOP president John McNesby was perhaps Boyle’s top supporter. Now, he is with Sabatina, saying he has been a strong supporter of police officers, firefighters and unions.

Sabatina said, in his current term, he has worked to improve I-95 and Roosevelt Boulevard, increase public access to the Delaware River and strengthen commercial corridors.

“I just want what’s best for Northeast Philadelphia,” he said.

Sabatina thanked representatives of the plumbers, carpenters, Teamsters and glaziers unions for being in attendance.

Republican David Torres will be making a second bid in the 2nd Congressional District.

Councilwoman Cherelle Parker (D-9th dist.) introduced a resolution that would put a question on the November ballot giving voters a chance to eliminate stop and frisk.

The question would read as follows:

“Shall The Philadelphia Home Rule Charter be amended to call on the Police Department to eliminate the practice of unconstitutional stop and frisk, consistent with judicial precedent, meaning an officer must have reasonable suspicion that a person is engaged in criminal activity in order to stop that person, and, therefore, an officer cannot stop someone unlawfully because of their race, ethnicity, gender, sexuality, religious affiliation or expression, or other protected characteristic?”