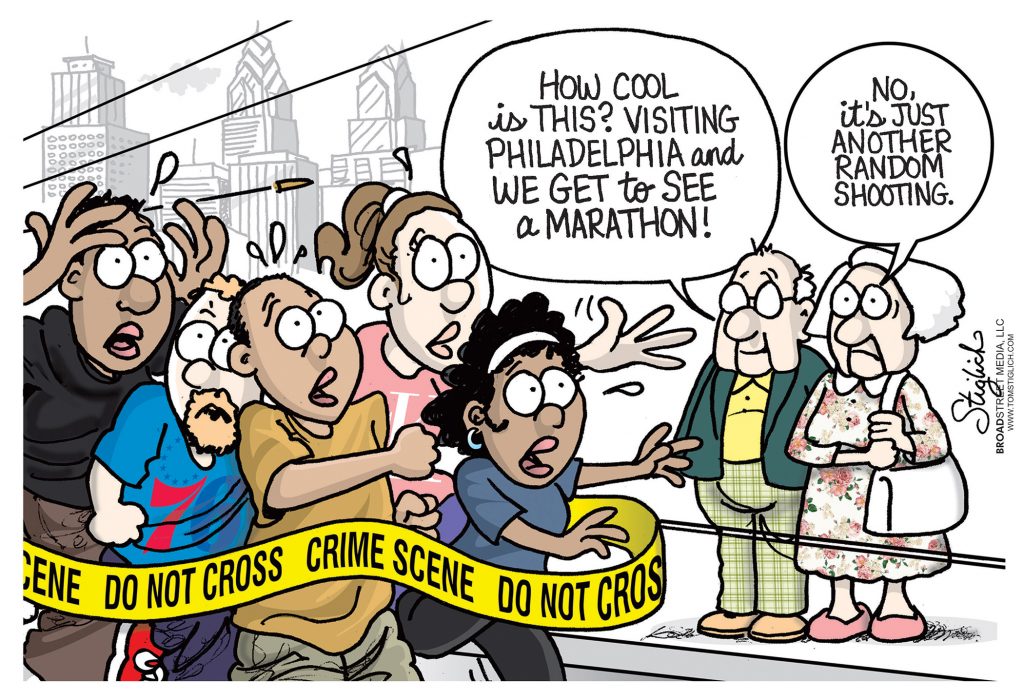 Our mayor, James Kenney, has his priorities screwed up again. He prefers to spend time threatening the Mummers about shutting down the annual parade that is enjoyed by many. This was the result of two knuckleheads who failed to follow the rules.

One of Kenney’s priorities should be dealing with the school buildings filled with asbestos. He believes in educating our children with his stupid soda tax that hurts Philadelphia businesses. He is the ultimate leader of the school system, along with Superintendent William Hite. Hite should be relieved of his position for his failure to deal with the asbestos problem as part of his responsibilities.

City crime, with all of the murders, is ultimately the mayor’s responsibility to do something about it. Yet he and DA Larry Krasner appear to be the cause behind all of the crime and making our city a “Sanctuary City.”

Another of his crime-ridden priorities is to seek approval of legalizing marijuana that only leads to the use of other drugs. He also is promoting setting up injection areas for use by addicts to allow them to shoot up, adding to more crime.

These are a few examples of his bad policies that hurt the city and the misuse of our taxes. Oops, Kenney should remain in the city to perform his duties and not out campaigning for Sen. Warren.

“More Taxes” Kenney, DA Krasner and Superintendent Hite should leave their positions, as they are failing the city’s residents.

There is nothing more sacred than the sanctity of life. It is truly a gift that has been provided to every human being on Earth from God — and it becomes a gift that we pass down to our children.

Unfortunately, this gift is being taken from countless lives here in Pennsylvania, due to the politicization of the right-to-life issue. There is something we can do about it.

Sen. Doug Mastriano and Rep. Stephanie Borowicz have introduced companion bills in the Pennsylvania General Assembly that will forbid physicians from conducting an abortion if they can determine the baby has a heartbeat. Thanks to 21st-century medicine, more than 90 percent of all pregnancies are viable when a heartbeat can be detected. We believe relying on this scientific fact will place the focus where it truly belongs — protecting the child.

Please encourage your state legislators to protect all children by supporting Senate Bill 912 and House Bill 1977.

All ado about nothing

For the first time in four years, it’s amazing to see that members of Congress are actually working for their pay. It’s the most I’ve seen these politicians hustle and bustle all about nothing, for three days straight, 12-hour days, and into the wee hours of the night.

It’s a shame they didn’t put that same energy into more important issues like securing our borders, especially now when there is an outbreak of the coronavirus. Something that is worthy of a cause instead of an immaterial phone call.

We all were led to believe that President Hoover was responsible for the Great Depression.

Upon reaching voting age, I registered and voted Democrat.

After several elections, I came to realize that I was neither conservative nor liberal.

All of my votes since then have been for whom I considered the best candidate.

I always had respect for a winning candidate even if I didn’t vote for him.

When Bill Clinton signed NAFTA, I changed my party registration.

The Democrats, especially Schiff and Schumer, can’t accept that they lost the last election.

My parents were born in Ukraine.

All of my relatives here and abroad have always regarded Ukraine as corrupt.

I haven’t many elections left, but the way I feel today, I’ll never vote Democrat again.