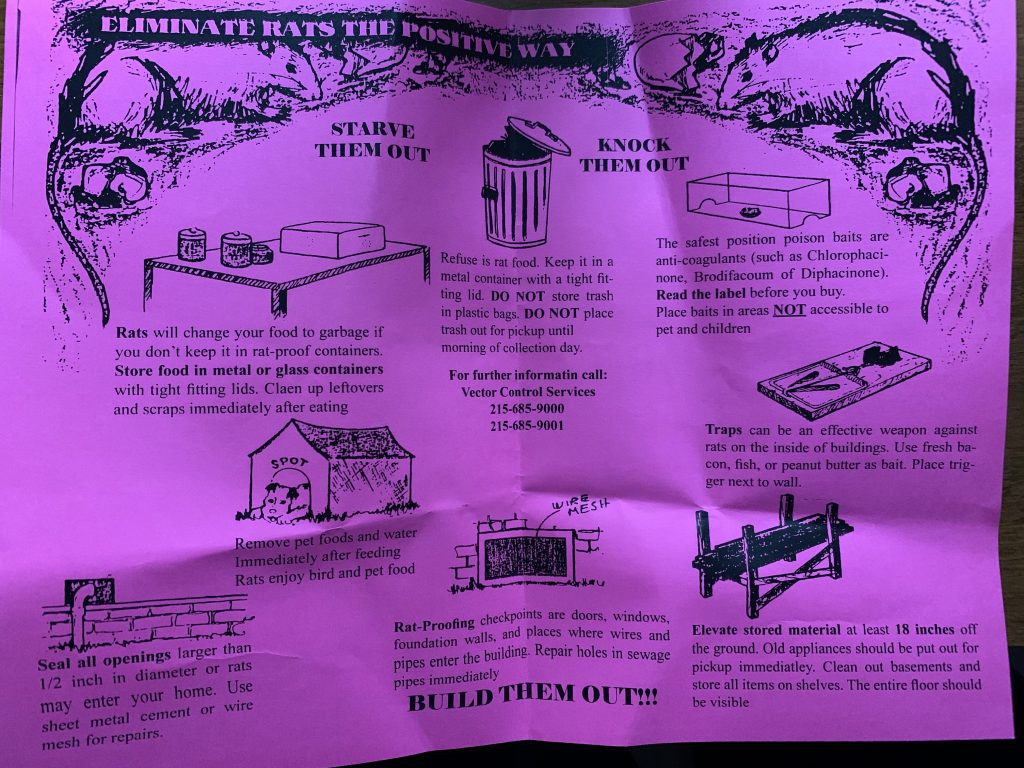 It may be the year of the rat, but residents of Oxford Circle are taking measures to prevent the rodents from getting onto their properties.

State Rep. Jared Solomon last week hosted an informational meeting about the pests following growing concerns from residents. Rats have been reported by residents in the neighborhood, particularly in areas such as the intersections of Castor Avenue and Knorr Street, Castor and Kerper Street and Kerper and Loretto Avenue.

What’s the issue? Traps around these intersections that kept rats underground and in the sewers were moved, allowing the rats to climb out in search of food. Neighbors who don’t leave their trash out properly are creating an easy-access feast for the rats, said Jonathan Edelman of Solomon’s office.

“If you’re a rat all you need to do is walk up to a bag, rip it open and there’s dinner,” Edelman said.

The city does not require you to put trash bags inside of trash cans with lids, but doing so will make access to food much more difficult for rats. Rats look for a source of food, drink and shelter, and once they find that they will move in.

The city Streets & Walkways Education and Enforcement Program and Vector Control have been baiting and killing the rats and addressing issues with individuals. Vector Control removes and controls pests that can interfere with healthy living such as rats and mosquitoes. Ray Delaney of Vector Control said they are concentrating on the area.

Individuals with a rat problem are encouraged to contact Vector Control’s rat complaint line at 215-685-9000.

The rats are burrowing in yards under or close to where the trash is kept. It is rare that the rats try to get inside homes, said a representative from Vector Control.

“What you have in your trash is worth eating already,” he said. “To a rat it’s like a gourmet restaurant.”

SWEEP was created to educate citizens about their responsibilities under the Sanitation Code. They will issue warnings and citations to code violators via street patrol. Property including front and rear yards and sidewalks must be kept free of trash and litter, with all trash being placed in proper containers. Trash must be placed out only on the designated trash day.

Trash cans without tight-fitting lids are a source of the issue, neighbors at the meeting said. One neighbor voiced a problem where the trash people take their lids. Call 215-685-8072 for a replacement lid if yours was taken by a city trash truck.

The meeting was hosted at The Exchange at Oxford Circle, 6434 Castor Ave.

The meeting was intended to be the first of multiple steps to control the issue.

An archbishop with Northeast Philly ties