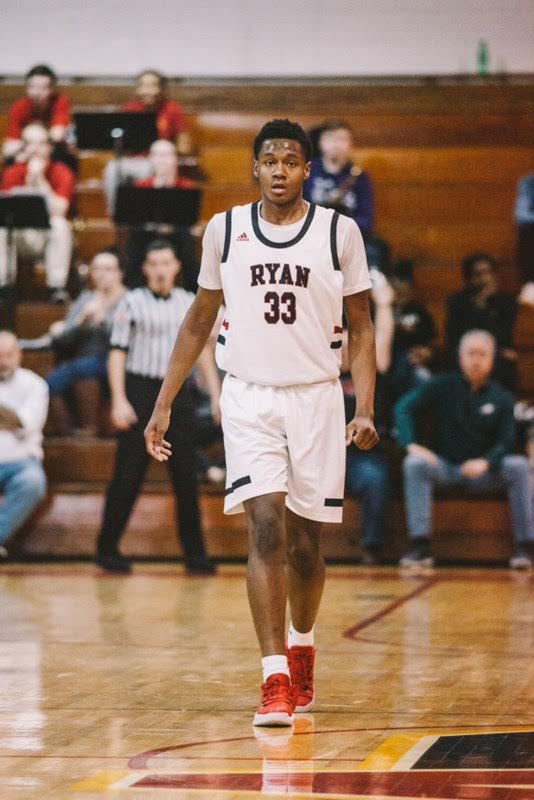 Aaron Lemon-Warren was arguably the most valuable player in the Catholic League during the first half of the season.

But if you’ve been around the Archbishop Ryan High School basketball team as of late, you know the junior guard is still pretty darn valuable.

Lemon-Warren was lighting up the league, leading the PCL in scoring at 23.8 points per game in helping the Raiders win six of their first eight games of the season.

Then, just as Ryan was about to start a crucial part of its schedule, Lemon-Warren’s season came to a painful ending.

“It’s funny because I was talking with my coaches and they said I wasn’t showing as much fire, they wanted me to be more aggressive, so I was going so hard in practice,” said Lemon-Warren, who lives in North Philadelphia. “We were playing halfcourt, and I went up for a rebound and came down on one of my guy’s foot. I knew it was bad. I thought it was either broken or fractured.

The bad news is the break ended his season.

The good news is Lemon-Warren has been just as important to the team as an emotional support spectator as he was on the court.

Lemon-Warren hasn’t missed a game since the injury.

Other than when he’s at a doctor’s appointment or physical therapy, he hasn’t missed a practice.

And he’s more than happy with what he’s seen.

Ryan didn’t have a great ending to the regular season. After beating Judge it its first game without their star, the Raiders dropped four of their final five regular season games. But they rebounded in the playoffs. First, they knocked off West Catholic in a first-round game. Then they bested second seed Bishop McDevitt in the quarterfinals to advance to the semifinals at the Palestra. There, they put a scare into eventual champ Neumann-Goretti before falling. Then they advanced to the state tournament by downing Mastery Charter North in a District 12 Class 5A play-in game.

Ryan then won its opener in the state playoffs, knocking off Penn Wood 62-50 in a first-round game. The Raiders will meet Elizabethtown on Tuesday in the second round of the playoffs.

In every game since his injury, Lemon-Warren was there doing whatever he could to help get his squad into position to win. He wasn’t scoring, but he was certainly helping.

“I just try to get everyone hyped, that’s what I can still do,” Lemon-Warren said. “I’m not surprised what they’re doing, but I’m very proud. The seniors are leading the way, and the younger guys are really playing well.”

Then the star player turned into the coach. And he broke down what all of his teammates bring to the table. Coach Joe Zeglinski has a rotation of six guys, Gediminas Mokseckas, Christian Isopi, Luke Boyd, Dom Vazquez, Jalen Snead and David Wise, and Lemon-Warren has praise for all of them.

“G is great, he was doing great since last year,” Lemon-Warren said. “He’s a great player. But the other guys, man, Dom runs the team. He was doing this last year, but he’s taken it to a new level. Jalen, I always tell him, he’s an elite defender. The guy dribbling in front of him should be scared. It doesn’t matter who it is. They should be scared. On offense, too. He’s great.

“Luke, I always tell him, he’s gotta shoot. He’s a great shooter. I tell him during games and I told him in practice, even before I got hurt. Shoot! And Christian has become the big man we need. He’s really come through. And David Wise, he’s our hype man. He brings so much energy to the floor. He comes out and he gives it everything. All of them. It’s working.”

This makes things exciting for Lemon-Warren next year, too.

Last summer, he was the breakout star of Philly hoops. He tore it up in summer leagues and showed everyone he would be a force come winter time.

Then when the winter rolled around, he proved he was a lot more than just hype.

While the Catholic League is full of Division I recruits, he was the top scorer. He was the driving force behind Ryan’s quick start.

He credits his team and coaches for a lot of that.

“I should be good for the summer and I’ll get back to doing it.”

That’s scary for the rest of the league.

Clearly, Mokseckas and Isopi are two top players and they will be missed after they graduate in June, but every other member of the team will return next year.

So will a healthy and motivated Lemon-Warren. He’s got confidence. He’s got motivation. And as he showed this year, he’s got a lot of ability.

And he’s coming with a team full of players who gained valuable experience in the playoffs. And Lemon-Warren hasn’t just been a cheerleader since he got hurt.

“I work with the coaches a lot, I see a lot of things you don’t see when you’re playing,” Lemon-Warren said. “They take time to explain things to me. I see why people do things. I’m learning. I’d rather be playing, but I go every day to support my guys, but I’m getting better, too.

“I have a great relationship with (Zeglinski). He helps me a lot. He always has. Every time I’m with our trainer at Ryan, he comes in and sees how I’m doing. And he talks to me. We’re all really close. We do it for each other.”