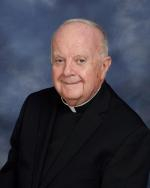 A memorial funeral Mass is planned at a later date for Monsignor Charles E. McGroarty, the longtime pastor of St. Matthew Catholic Church who died on March 17 at Holy Redeemer Hospital.

McGroarty served as pastor from 1987 to 2014, then held the title of pastor emeritus.

He is survived by many nieces and nephews.

McGroarty also served as director of the Family Life Bureau for the Archdiocese of Philadelphia.

The funeral Mass will be celebrated at St. Matthew.