Colin Langan has many interests.

For his first featured project, he’s able to combine a few of them while honoring his best friend while he was growing up.

Langan, a 2013 graduate of Archbishop Ryan High School, loves sports, and like all Philadelphia fans, he was excited when the Eagles won the Super Bowl in 2018. But at the time, it was hard to celebrate because he just went through a personal tragedy that impacted his life far more than Philly’s huge victory over New England.

While the area was buzzing about the Super Bowl, Langan had other thoughts.

“It was hard to celebrate, I was so sad, but everyone was all about the Eagles,” Langan said during a telephone interview from Los Angeles. “It would have meant a lot to me. Football isn’t my top sport, but I love sports. I would have been celebrating, but I was thinking about Devin.”

He kept Kuhn in his thoughts and it was the inspiration for his new venture.

“He would have loved it, he loved sports,” said Langan, who went to St. Anselm and Ryan with Kuhn. “We grew up together. We were best friends. So I thought this would be a good way to honor him.”

It’s also a huge step for Langan and his producer Mohab Abou-Elalla, a fellow Temple graduate.

The duo needed to raise money, so they did a Kickstarter and recently raised the $5,600 they needed to shoot. Both are in Los Angeles, and the plan was to come back to Philadelphia to do the shoot, but travel restrictions thanks to the coronavirus have put those plans on hold. They’ll wait it out and see what happens.

Langan is obviously excited to do the project, especially since he’s been preparing for this his entire life.

As a kid, he was very interested in movies, but he wasn’t sure how to get involved in it.
“I thought I had to be an actor, I didn’t know there were so many other things you could do,” said Langan, who is working cleaning sets for extra money in Los Angeles. “I was always interested in it. It was something I really liked.

“But when I went to Temple, I didn’t even think to go into it. Then I decided to switch my major, I figured I’d try it for a semester and see how I liked it. It was my best time in school. I really enjoyed it and I was pretty good at it, so I went with it. I followed my dream.”

He also knows that it helps to have people supporting him, especially his family and friends. They’ll be a huge part of his success when he makes the film.

“I’m lucky to have great people helping me, my family is so supportive,” Langan said. “I can’t wait to do the project. We raised the money, we have a really good story to tell. It would have started sooner if it wasn’t for everything that’s going on, but when this ends, we’ll do it. I think people will really like it.

“It means a lot to me because it’s personal. It’s inspired by my friend. I think people will really like it. People in Philly love sports, they love the Eagles. It has everything with that, but it also has a great story.” 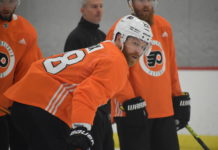 Giroux a longshot for the Olympics 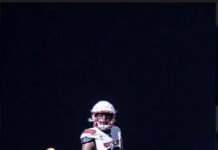 Stevens proves to be a great mentor at Northeast 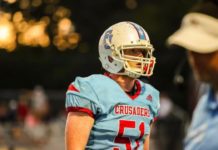 Hartman excels in real football, too