It didn’t matter what uniform they were wearing, they were all friends with Georgie Karusky.

The Archbishop Ryan High School senior grew up playing sports all over. He played football, soccer and baseball for many different teams, and no matter where he went, he was always the most popular guy on the field.

“No matter where we were, he knew somebody,” said his dad, also named George. “He had so many friends. He played at fields all over Northeast Philly and Southeastern Pennsylvania, even, in Bensalem. He played for so many teams, and no matter where he went, he had friends. People just liked him. He was never the best, he was short and stocky, but he gave effort and people liked him. He had a lot of friends.”

And now all of those friends are in mourning.

Georgie passed away Thursday afternoon at Jefferson Torresdale Hospital after battling meningitis since Monday. He went to the hospital Monday with headaches, but was sent home. He returned on Tuesday and rapidly got sicker while in the intensive care unit.

“With the whole coronavirus, he went in on Tuesday and I couldn’t go see him, they didn’t think it was too bad, so I went home,” his dad said. “I got one call that said he was good, things were OK, and then they called me a half-hour later, and told me to come in because he wasn’t doing well.”

Losing your son is unimaginable, but it is even more challenging for Karusky.

The pair were inseparable since Georgie was 10 years old and his mom died after a long illness.

The boys’ bond grew strong, mostly through sports. Georgie played just about everywhere and his dad was always there, either coaching, cheering or just supporting.

“Sports is just what we did, instead of grieving, we would just go out, and he would play sports to stay busy,” Karusky said. “I mostly did coaching. But he played soccer all over. There isn’t a field in Northeast Philadelphia that he didn’t play on. He just loved sports, and he loved the friends he’d make. He loved the teammates. He played with everything he had.” 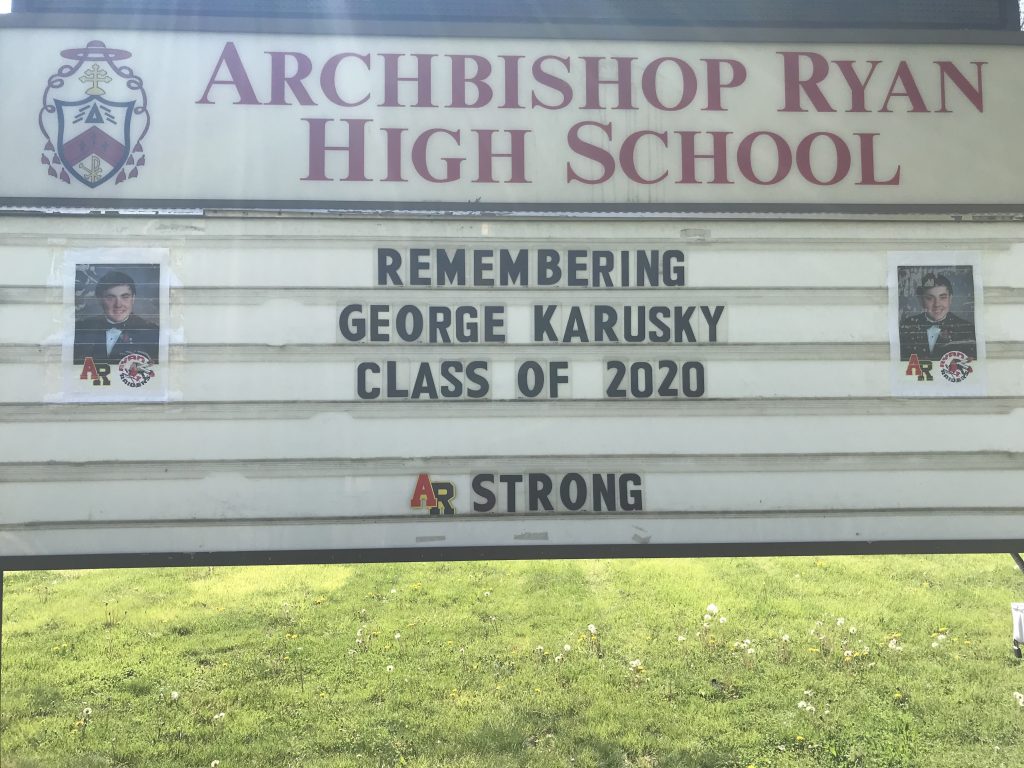 Georgie’s final soccer game was the epitome of what kind of player he was.

It was in the semifinals of the Catholic League playoffs when he filled in for the team’s injured goalie against La Salle. He played 10 minutes in the end of the second half without surrendering a goal.

In the second half, the starting goalie was able to return, but that’s when a forward was banged up and couldn’t continue. Georgie moved up top and scored a goal.

Ryan lost, but Georgie did everything in his power to will the Raiders to a strong showing against the eventual Catholic League champion.

“He would do anything to get on the field,” said Ryan coach Ryan Haney. “He became so mature his senior year. He really bought in to what we were doing. And he would take the younger guys under his wing. He really cared about people.

“He was a great teammate. And he was a great kid. Since the season ended, he would always come over and make a point to say hi or give me a hug. He was a good player, but a great person.”

Georgie, who also starred in baseball, was a fringe starter on the soccer team, but he really blossomed as a football player in his senior year, when he was Second-Team All-Catholic as a kicker. He was also a great punter, and won the Sportsmanship Award from the league. Next year, he was going to play at Chestnut Hill College, to kick for the sprint football team and major in computer science.

While he was looking forward to the future, his dad couldn’t be happier with what he got out of his high school.

“Everyone at the school has been great, it’s a great place,” his dad said. “When he was dying, he was on a ventilator and we knew he was going to die, so all of his friends would FaceTime to say goodbye. They couldn’t come in to see him. The people at Ryan were so incredible.

“I was so upset because coronavirus kept him from the entire baseball season, it wiped out his prom and it was going to take out graduation. I called Principal (Joe) McFadden and was talking to him. I was so upset he wasn’t going to graduate, and Mr. McFadden said he will see to it that he graduates. I’m so proud of that. His mom went to the school, it means so much to me that he’s going to graduate. It means everything.

“Ryan (Haney) and him, Ryan pushed him to be better. He didn’t like to run, and Ryan pushed him. I can’t forget to thank Chris Lampart, the football coach, for giving him the reins this year and showing full confidence in him.”

The love was mutual.

Georgie was loved by everyone in the school. It’s why dealing with this loss is such a tough blow for the community. But, like always, the school is sticking together. It’s exactly what Georgie would have wanted.

“He was the kind of student you wanted to be around. That was Georgie. He was always appreciative of everything. When he won the award from the Catholic League, we put it out on social media and he said, ‘Thanks, that was cool.’ He was very humble, just a nice kid.”

Funeral details and memorials are incomplete and will be impacted by social distancing through coronavirus, but that hasn’t stopped the outpouring of love and support to his family.

“I’m lucky to have great family and great friends,” Karusky said. “George had so many friends. So many people are reaching out. And I have a great family, my family and the in-laws and great neighbors. Everyone has been so nice.

“He was everything to me. I miss him so much.”

To donate to medical and funeral expenses, visit https://bit.ly/3aujBkc.