This certainly isn’t the way we wanted to wrap up the school year.

Normally we’re starting to look at playoff matchups, trying to predict who will win the spring sport championships, and getting ready for all the good things that come with the end of the school year.

So much for that.

Coronavirus ruined everything. Instead of catchers masks, we got medical masks. It wiped out the spring season as well as graduations, proms and school. And while everyone has been inconvenienced, with the exceptions of the victims of the disease and those working in the medical field, the ones who have been hit the hardest are high school seniors.

Things will get better, guys, so hang in there.

Among the things that have been spoiled by the virus is the Northeast Times Sports Banquet, which has been canceled. We can’t give out spring awards because no games were contested, but we will celebrate other achievements thanks to Spike’s Trophies, which will provide a sharp plaque to each winner. Thanks, Spike’s!

And there is a lot to celebrate. We’ve already named our fall and spring winners, but now is the time to name the other awards.

Great job by all athletes, coaches and parents, and let’s hope this mess is long over by the time it’s time to practice for the fall season.

Here is a look at the end-of-season winners and what they’ve accomplished over the last school year. 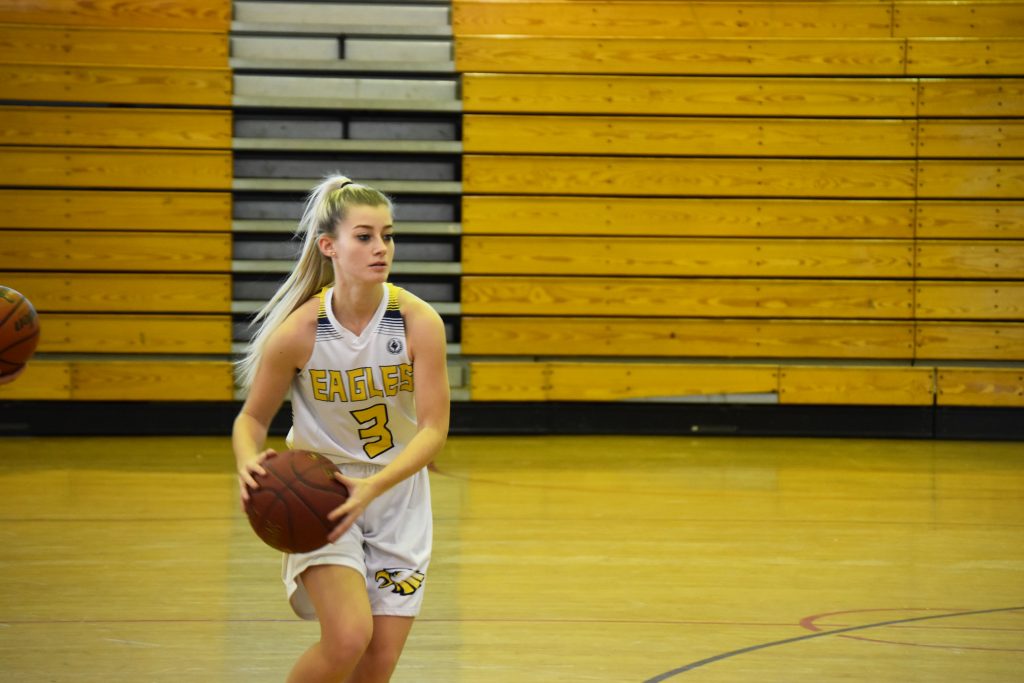 Female Athlete of the Year

Smith has been a star her entire career for the Eagles.

In basketball, she’s been a four-year starter, and led the Eagles to the playoffs three times. This year, she became the school’s all-time leading scorer, and did so while running the offense and being a pass-first player. In soccer, she played many positions, and was almost always the top player on the field.

It was hard for her to pick a sport for college, so she didn’t. Next year, she will play both sports at Gwynedd Mercy University.

Male Athlete of the Year

There were few athletes who won as much as Marchesano did this year.

He also was a star on the soccer field, leading a midfield that won two playoff games en route to a trip to the Catholic League semifinals. There, Ryan fell to eventual champions La Salle 4-3 in an entertaining match.

Next year, he’ll focus on wrestling at Ursinus College.

Female Scholar-Athlete of the Year

Maintaining a 4.2 grade point average isn’t easy. It’s even harder when you’re constantly playing sports. But Coleman did it this year, and she was as big a star in athletics as she was in the classroom.

She guided the Warriors to a Public League championship in soccer, where she was one of the top players in the league, and then she was a star in basketball, guiding Franklin Towne to the playoffs. She did all this while ranking No. 6 in her senior class.

She’ll play soccer next year at Cabrini College, where she’ll major in nursing.

Male Scholar-Athlete of the Year

He could have been the best wrestler in the city this year. And he was even better in the classroom.

Logue helped Judge win the Catholic League championship and advanced to the state tournament for the second year in a row. He finished his illustrious career with 142 wins and four All-Catholic championships.

Those wrestling numbers are impressive, but he has even better numbers in the classroom, where he ranked eighth in his senior class.

Next year, he’ll wrestle at the University of Wyoming, where he’ll major in nursing.

This was a great year for the Tigers, and Radley was the star. She led the team in scoring with 15.9 points per game, and blocks. She also was second on the team in rebounds, pulling down 7.5 boards per game.

She was the leader of the team that advanced to the Central Atlantic Collegiate Conference championship game and helped the Tigers win 18 games, which is 10 more than they did a season ago.

She also starred in the classroom, where she graduates with a degree in psychology.

The defender from Father Judge was named to the All-CACC first team in helping the Tigers with 10 games and advance to the CACC semifinals.

Holmes started every game on the year, scoring one goal and adding two assists. He was the catalyst in helping Holy Family surrender just 15 goals in league play this season, which was second best in the conference.

He is majoring in marketing.

You’d be hard-pressed to find a leader better than Budd. She was the president of her senior class and a captain of the basketball team. She plays five sports and was the lead in every play during her four years at the school.

Budd is also ranked 27th in her senior class and would sing the national anthem prior to every home basketball game.

She’s also a member of the diversity team, mock trial and the liturgical friends group.

In basketball, the Pandas were a young team this year, and they needed someone to pave the way for the future. That’s where D’Aulerio came in. She made sacrifices her entire career, moving to point guard as a freshman so she could get get on the floor.

And by making a change in position, she sacrificed a lot of points to help run the offense. This was the first year she enjoyed consistency, as the Pandas changed coaches after her freshman and sophomore year. This was the second year she learned under former Nazareth star Mary Kate Magagna.

Bauer has been a basketball player on the Sentinels for four years, and she’s been one of the better players in the program since she arrived. They’ve relied on her for her scoring, defense and leadership skills, especially this year as the team improved to a four-win team in the Catholic League as opposed to last year, when the team went 0-12.

This year, she also became a golfer. The team needed some players to fill out its lineup, so she signed up and went on to help the team win the Catholic League championship.

Next year, Bauer will attend college with hopes of becoming an ultrasound technician.

Anyone who plays high school football is courageous. But Henderson showed more courage off the field than on it.

Also a wrestler, Henderson lives alone and pushes himself to work to pay rent and go to school. He lived with his adopted family until he was 18, then he moved out and lived on his own.

He hasn’t had it easy. There were days where he didn’t have enough money to pay for his next meal, and there were times he had to make a choice between working and going to practice, but thanks to compromise, he was able to do both.

He hopes to find a place where he can go to college and play football, and any school that gets him will get a kid who isn’t afraid to work.

Teammate of the Year

It didn’t take long for the Raiders big man to show how committed he was to the team. In Ryan’s first Catholic League game of the season, Isopi was pulled from the starting lineup so the team could go with a smaller, faster lineup. When Isopi’s number was called, he gladly went in, and the result was a victory.

He didn’t find himself on the bench much more.

Isopi became a key player for the Raiders, who advanced to the Catholic League semifinals. He quarterbacked the defense, and became a dependable scorer around the basket. When the season ended due to the shutdown, Ryan was in the quarterfinals of the 5A state playoffs.

Next year, he’ll bring that toughness, defense and leadership to Gwynedd Mercy, where he plans on majoring in accounting.

Some players go their entire life without ever playing in a championship game. The Roman Catholic senior went to the championship game four times. And every year, he was one of the top defenders on the team.

This year, he once again led Roman to the title game, and while he failed to win, he was always one of the best players on the field. It’s why he was named to the All-State team and was selected as the Most Valuable Player of the PCL.

Thanks to his efforts, he led the Cahillites to 13 shutouts on the year. He also contributed on the offensive end, scoring eight goals with four assists.

There are a few reasons the Quakers have become one of the top programs in the city over the last few years. Carter is one of them.

The sharpshooter was a four-year starter for Penn Charter, and this year she surpassed the 1,000-point plateau. She guided Penn Charter to a 25-win season and helped the Quakers advance to the Pennsylvania Independent Schools Athletic Association championship game.

She also was a key player on the school’s soccer team.

Next year, she’ll play at Chestnut Hill, and in the future, she hopes to become a dentist.

The fall winners are:

The winter winners are: