Amber Dalton didn’t want to pick between softball and cheerleading.

The St. Hubert High School senior grew up making both her parents happy. Her mom loved cheerleading and her dad enjoyed softball. Both parents passed the love of their sport onto their daughter, and when she got to Hubert, she decided to do both.

“I don’t think I could pick between them,” said Dalton, who lives in Morrell Park. “I just never saw myself not doing one of them. I love them both equally. Both are great, it would be so hard to pick. I’m glad I didn’t have to.”

It took a lot of hard work to compete on both high-level teams, and she was able to contribute a lot to both outfits.

And she has the plaques to prove it.

Dalton was a member of three Catholic League championships in cheerleading. The team also won two state crowns. In softball, she won two district championships and one Catholic League title when the Bambies won the crown last year. They didn’t get a chance to defend it because the spring season was canceled.

“Every championship is great, it’s why you work so hard,” Dalton said. “In cheerleading, the biggest championships were the state championships, but in softball, the (Catholic League) championship is the one I really cared about. That’s the one you want to win because it’s so hard to do it.”

Last year, Dalton played primarily in the outfield, but this year she was being groomed to play more first base. It would have been a new era for the Bambies. Dave Schafer stepped down as coach after last year and Dan Milio took over. He never got a chance to start, but the team did bond before the season started.

“We had a group chat last year and we all stayed in touch, but once the season ended, we stopped talking in it,” Dalton said. “But then we started a new one with this team after workouts. Workouts started in November and ever since then we’ve been talking a lot. We won last year and I think we would have been good this year, too. It was tough that we didn’t get to play.”

Still, it wasn’t a bad career. 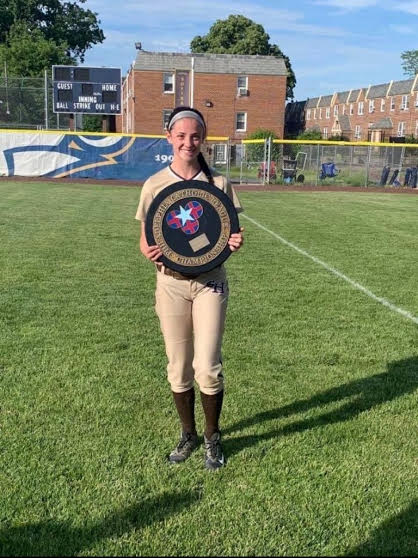 She didn’t attend St. Hubert until her sophomore year. She started her high school career at MaST Charter. Once she became a Bambi, she immediately got involved in sports. And both sports complemented each other.

It also helped her athletically.

Softball is a grind, but according to Dalton, it’s nothing compared to the work you have to do in cheerleading.

“We’re not sideline cheerleaders, it’s a lot harder to do competitions,” Dalton said. “I’m way more banged up after cheerleading than softball. It’s very strenuous. It’s fun, but it’s a lot of work.”

It also helped her with nerves.

Catching a popup or slapping a single in a clutch spot takes gumption. She learned a lot of that while competing with the Bambies in major events, including the national championships held in Florida.

“In cheerleading, I get so nervous before routines, it really gets on your nerves,” said Dalton, who is one of three seniors on this year’s softball team. “I usually count. Either count by twos or fours. I do multiplication. That kind of helps me for some reason. But when we start performing, once we get on the mat, I’m not nervous.

“I tell (softball teammates) the same thing. I tell them what I do. I just try to help them. I get nervous in softball, too, but I think cheerleading helps a lot with that.”

Dalton is now finishing up the rest of the school year before getting ready to celebrate with a summer down the shore.

When she returns, she’ll be at Holy Family, where she is going to major in nursing. Softball is a distinct possibility.

“I talked with the coaches and they were going to come out and watch me play, but they couldn’t because everything was off,” said Dalton, who is a member of the school’s Athletes Helping Athletes program and student council and is in honors and advanced placement classes. “I’ll definitely play if I get on the team and I’m able to with school.

“I have a lot of people in my family who are nurses, so I think it will be a great job. Plus, they’re needed right now. It’s a great job and they’ll always need nurses. I think right now I want to be a nurse practitioner. I’d have to go to school for two more years, but that’s what I’m leaning towards.”