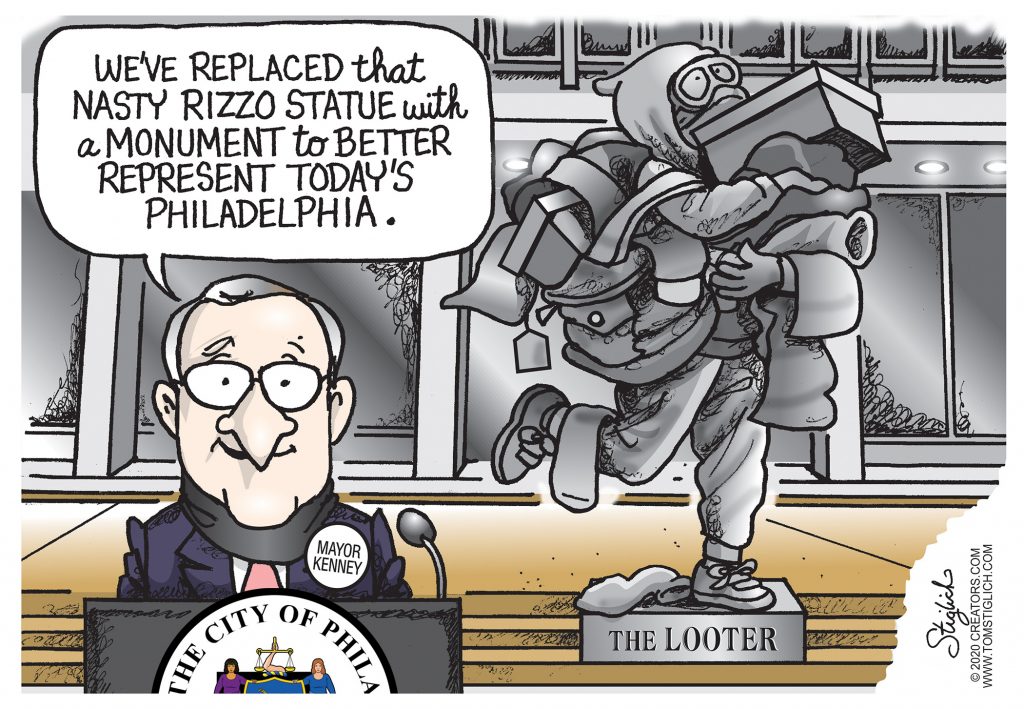 What happened to George Floyd was 100% wrong, and the officers are going to be held accountable. Their actions were a disservice to all police officers. We cannot have members of law enforcement acting like that. It is uncalled for and beyond not necessary. If it is in the plan for people who want criminal justice reform to end actions like that, I agree.

I will not ever agree with people throwing vile things at police officers, cursing them out and treating them like they are the enemy. The actions that are taking place are supposed to honor George Floyd and express people’s opinions on how he died. It is also to discuss if any actions by people could take place so these actions don’t take place again.

Thank you and God bless you.

Voters tiring of Torres and Trump

In response to Mr. Torres from a recent issue, you represent the worst of the Republicans and the existential threat that they pose to American democracy. You lob around words like “socialist” to describe Congressman Boyle, when he is anything but. You pretend that a global catastrophe brought about by global warming, substantiated and forecast by scientists, the U.S. military and insurance companies, will somehow cost less that the Green New Deal. You did not bother to cite your source, but it is actually a right-leaning think tank by the name of American Action Forum, so let us take those numbers with a large grain of salt. And let us not forget the incredible economic recovery that President Obama passed to Mr. Trump after Obama successfully helped this country overcome the Great Recession. Of course Mr. Moses is not used to lower taxes. That might have been a possibility if the Trump administration and the Senate and House Republicans had not passed a huge tax break for big businesses like Amazon, which ended up effectively paying $0 on $11.2 billion in profit in 2019 (see Fortune.com), which is the only thing Republicans did in Trump’s first two years. Instead of preparing America for the deficit spending that is now necessary to manage the COVID-19 crisis, Republicans went right through the basement floor and kept digging this country deeper into debt to enrich their business contacts. You attacked Mr. Moses, you attacked Congressman Boyle and you attacked Congresswoman Ocasio-Cortez. You wasted all that space when you could have been articulating policy positions and how they might benefit the electorate. Unity and bipartisanship are obviously not your goals. You are an amateur who is playing to Trump’s base, using Trump’s divisive tactics, but what you do not realize is that voters have had enough of people like you and Trump. Your bid for the 2nd district will fail.

The reform should be that City Council doesn’t get personal protection from the Police Department. Let them walk the streets fearfully like the rest of the residents.

They should repay the city budget for any police protection they received thus far, including the $178,000 for the riots. They are being very pretentious thinking they need protection more than the average citizen. Maybe that’s why the city is in such dire straits.

Give Columbus a second chance

Whether you think far left, far right or somewhere in between, we all must be tolerant of each other’s views.

This is America. No group is only totally correct.

People want to take down statues of Christopher Columbus.

Some people want it to continue to stand in their neighborhood.

I am sure if Christopher Columbus knew back in the 15th century he would upset others in the 21st century, he might have thought twice.

Please give him a second chance.

Doesn’t everyone deserve that?

If we are to advocate police reform, then why not social reform as well?

For decades now, every time there’s a crime committed against a black person, it’s the usual appearances by Al Sharpton and Jesse Jackson, giving their usual speeches, and then they both disappear until the next crisis.

What have these two contributed to their communities other than giving speeches and unfulfilled promises for the past decades?

Instead of speeches, where’s the help they keep promising for the low-income families living in poverty?

Celebrities and athletes are contributing money to the Black Lives Matter protest movement, but why not contribute to where it really belongs, to the urban cities of America? Right now, Camden, New Jersey is the poorest city in America, so where’s the help?

Also, instead of funneling Kenney’s soda-tax funds for pre-K programs, why not fund vocational training and skills for the young adults who aren’t going to college and get them in the workforce instead of them turning to crime on the streets.

And as far as defunding, disbanding and dismantling the police, that’s the most idiotic idea ever proposed. That’s going to incite more violence.

Since the Parkland school shooting, the House Democrats want gun control. So without guns, how are citizens going to protect themselves, especially when there will be no police to protect us?

I remember when I was 15 years old, Delaware Ave. was renamed to Columbus Blvd. in 1992. I respectfully accepted our city’s choice due to the 500-year anniversary of Columbus arriving in America, yet knew it didn’t sit well with me. I used to think, “What’s next? Changing our river’s name to Columbus River?”

As a lifelong Philadelphia resident, I still call it Delaware Ave. The Delaware River has more meaning than Christopher Columbus. George Washington and his troops crossed it in the winter of 1776, it connects bridges, import/export, flowing tides into the Delaware Bay and into our oceans.

Fast forward 28 years, I feel stronger than ever to have it changed back to Delaware Ave. I also feel a majority of the tri-state area and especially residents of Philadelphia feel the same way. The year 2020 sure brought us all tremendous change. With our nation currently going through a “resetting of itself,” why not make a positive change and bring Delaware Ave. back?

If you could give me any direction on how I can follow through with this, I would appreciate it.