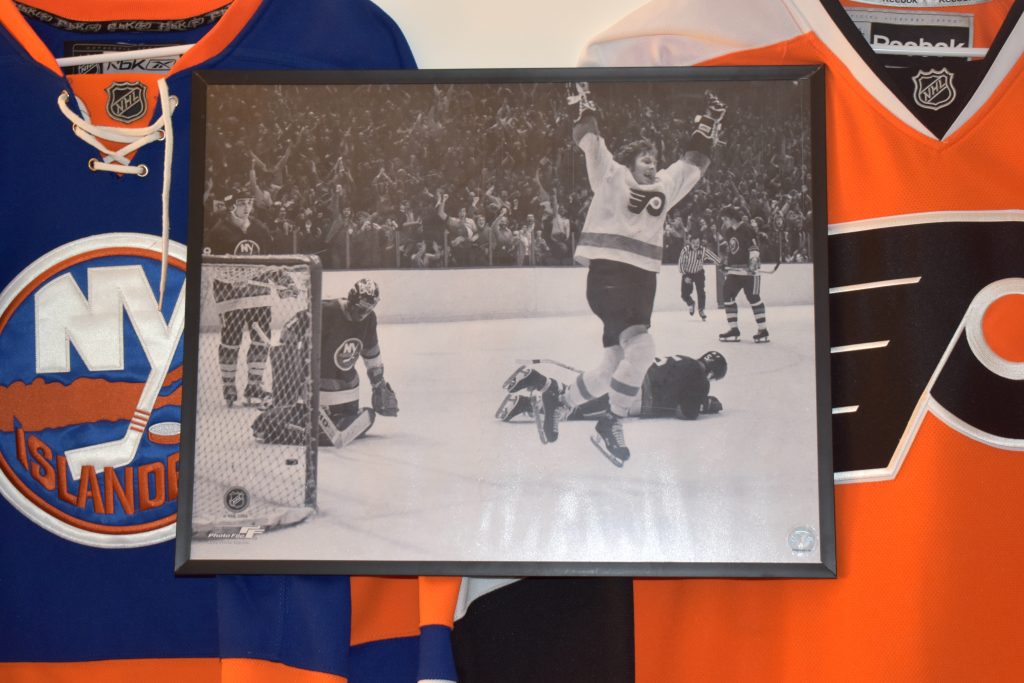 But for the last three decades, the Philadelphia Flyers’ relationship to the New York Islanders can be described simply as “ships that pass in the night.”  — Henry Wadsworth Longfellow.

In the 1970s and ‘80s, they often collided. Whether it was during penalty-filled regular season bouts as Patrick Division rivals, or during the four times they met in life-or-death playoff series from 1975 to 1987.

The Flyers defeated the Isles in ’75 in a seven-game thriller just before beating the Buffalo Sabres to win their second of back-to-back Stanley Cups. The Islanders got revenge in 1980, downing the Flyers in controversial fashion to capture their first of four straight Stanley Cups with Hall of Famers Mike Bossy, Denis Potvin, Billy Smith and Bryan Trottier running the show.

The Flyers got paybacks in ’85 and ’87 as the Islanders dynasty began to fizzle, but both times Philadelphia ran into the next dynasty to wear blue and orange in the Edmonton Oilers on the final stage.

From 1987 on, the Flyers-Islanders rivalry was, as Longfellow said: “… only a look and a voice, then darkness again and a silence.”

Despite remaining bunkmates in the same division since 1974 — even as the division name changed and expanded on several occasions — the Flyers and Islanders never met again in the postseason. Until now.

The team in blue shoulders most of the blame.

Thanks to an ownership that often torpedoed its own success, and a decade-long reign of terror by former general manager and more recently disgraced NHL on NBC broadcaster Mike Milbury, Islander appearances in the postseason were rare.

In fact, it’s tough to fathom, but Islander fans probably hate Milbury more than you do.

Milbury joined the Islanders organization in 1995 — just two years after New York made it to the Eastern Conference Finals —  and held the general manager’s position on Long Island for 11 years until he was let go in 2006.

During that time, the Islanders qualified for the playoffs just three times and failed to win a series. Furthermore, Milbury’s decisions on player personnel set the franchise back even further by trading away star players, signing bad contracts and poorly restocking the Isles’ farm system.

To be fair, Milbury’s hand was forced on several occasions as Islanders ownership preferred to trade away highly paid players, but the team got very little in return when it dealt away stars.

There was the time he traded future Norris Trophy winner Zdeno Chara and a first-round pick that would become Jason Spezza to the Ottawa Senators for Alexei Yashin, who was eventually bought out from a 10-year, $90 million contract.

Or there was the Ziggy Palffy trade, in which the future Los Angeles Kings star was packaged in a deal that didn’t bring back much aside from Olli Jokinen, who would be traded the following year.

That brings us to one of the most lopsided trades in NHL history, when Milbury traded fourth-overall pick Roberto Luongo and Jokinen to the Florida Panthers for Mark Parrish and Oleg Kvasha.

He drafted goaltender Rick DiPietro first overall in 2000. He went on to have a perfectly average career (130-136-36 record). Beyond that, the Islanders had basically nothing to show for their next handful of first-round picks with Sean Bergenheim (2001), Robert Nilsson (2002), Petteri Nokelainen (2004) and Ryan O’Marra (2005).

It fed into a stretch of 21 straight seasons without a playoff series win, which was finally snapped in 2016.

But since those dark times, the Islanders have been resilient. In the last 25 years, they survived Milbury, those incredibly ugly, but somehow cool wavy fisherman jerseys, the departure of John Tavares, and the Nassau Coliseum, which actually turned out to be a better option than the Barclays Center in Brooklyn with its partially obstructed views.

But here they are now. And the Islanders are humming.

Recent good drafting has inserted superstar Mat Barzal and underrated Anthony Beauvillier into the lineup after both were selected in the first round of the 2015 Draft. The Islanders can also showcase homegrown talent Josh Bailey, Casey Czikas, Anders Lee, Brock Nelson, Scott Mayfield, Adam Pelech, Ryan Pulock, Devon Toews and Michael Dal Colle, to name a few. They also have high-end prospects Noah Dobson, Oliver Wahlstrom and Kiefer Bellows waiting in the wings.

Even better news, a new arena at the Belmont Race Track is scheduled to be ready for the 2021-22 season.

This week, the Flyers and Islanders are set to lock horns in the playoffs for the first time in 33 years. The Islanders won all three meetings during the regular season, with one coming in overtime. However, optimistic Philadelphians can point to the fact that all three games were played as the second half of back-to-backs, with overnight travel involved. New York had at least one day off between each meeting, except for the final matchup in February, when the teams were on somewhat equal footing.

If you thought the opening round against the Montreal Canadiens was a grind, get ready for a root canal. The Islanders play extremely structured hockey under recent Stanley Cup-winning coach Barry Trotz, who brought a winning formula from Washington after winning it all just two years ago. Trotz sold the Isles players on the underdog role, but after taking down the high-flying Florida Panthers in the qualifying round and steamrolling the Capitals in the conference quarterfinals, the scales weighing New York and Philly have nearly drawn even.

The betting lines still favor the Flyers, but Alain Vigneault’s club will need to raise its game after sluggishly escaping the 12th-seeded Montreal Canadiens.

The Flyers have yet to play their best and are still waiting for their top scorers and power play to find their rhythm. Perhaps a renewed rivalry against an old foe can help bring that to fruition.

That would be poetic. ••