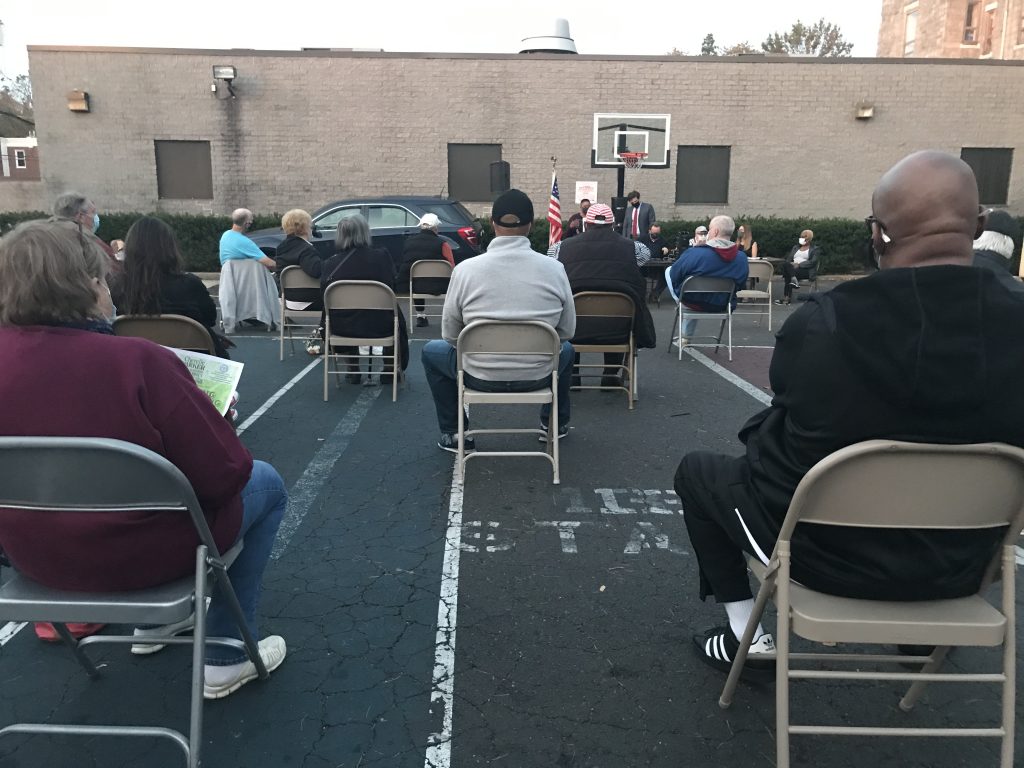 The Lawncrest Community Association on Tuesday held its second outdoor meeting, in the parking lot of St. William Parish.

The first incident took place at 5:18 a.m. at Michel’s Bakery, 5698 Rising Sun Ave. A male employee was robbed of his paycheck, the second time a bakery employee has lost a check in a holdup.

Next, at 4:40 p.m., a two-block car chase ended when a man was shot twice in the leg while inside his vehicle on the 6400 block of Rising Sun Ave. The victim ran into Larry’s, a steak shop. Mroz said he has been uncooperative.

In the evening, an occupant of a stolen car shot at another vehicle with three males inside on Bustleton Avenue.

Some in the crowd supported a petition calling for a police substation to be placed on city property on the 6000 block of Rising Sun Ave., along with police surveillance cameras placed on the avenue and Levick Street.

In other news from the meeting:

Members unanimously rejected a bid by the owner of a lot at 6729 Martins Mill Road to legalize the space for parking his construction vehicles. The land is zoned residential. A Zoning Board of Adjustment hearing will take place on Zoom on Nov. 10.

At an upcoming meeting, the LCA will debate a proposed Laundromat on the 5900 block of Rising Sun Ave.

• State Rep. Jared Solomon told the crowd that renovations of the Trinity Church, Oxford building are going well. The new 2nd Police District home, at 7306 Castor Ave, looks nice, according to Solomon. The lawmaker said banners should be placed along Rising Sun, Castor, Cottman and Bustleton avenues by the end of the year. Solomon’s office is open Wednesdays and Thursdays by appointment. Call 215-342-6340.

• Lawncrest-area voters are encouraged to vote ahead of the Nov. 3 election at J. Hampton Moore Elementary School, 6900 Summerdale Ave.

• Lawncrest Community Association will meet again on Thursday, Nov. 19, at 6:30 p.m. at St. William, either in the parking lot or the parish hall. ••