Jim Jackson remembers how tough it was getting his start in broadcasting and having to create his own breaks.

Fresh out of Syracuse University, and working as an unpaid intern at a radio station in his hometown of Utica, New York, Jackson spoke up when he saw an opportunity.

“We covered a ton of sports games on the weekends, but in between games, the station played music, like top-40 hits,” Jackson recalled. “I thought it was weird that there was talk radio happening all week long, and here we were doing this all weekend. I put a proposal together to do talk radio on weekends and who better to do it than me? I’m already here. They were sold.”

It became an open door for Jackson, who sacrificed some fun in his young 20s to get a leg up on the competition in the profession he loved.

“I worked from noon till midnight on weekends and my social life, just out of college, was shot,” Jackson said with a laugh. “But I got myself a full-time job that way.”

Sports broadcasting is known as one of the toughest, most competitive markets to crack, and Jackson has certainly thrived in the field, eventually becoming the voice of the Philadelphia Flyers, where he has served the last 27 years, doing play-by-play. The eight-time Emmy Award winner has enthusiastically described the highs and lows of the franchise to TV viewers, which included the Eric Lindros era, multiple long playoff runs and plenty of drama throughout the years. Jackson is now one of the longest-tenured play-by-play broadcasters in North America.

Now, he’s hoping to pass along a few of his tips and secrets to the next generation of broadcasters. Jackson recently announced the creation of JJ Broadcasting Coaching, which will offer programs including one-on-one coaching and teaching as well as small group sessions. Both paths will help young broadcasters gain some valuable experience and mentorship from one of the best in the game.

“It will be very concentrated,” Jackson said. “In essence, I’ll be teaching a course. I’m going to pour a lot into this and I’m really looking forward to it. I really love talking to younger people in the business or those wanting to get in the business. I know when I was a kid, I would have given an arm and a leg for the chance to talk to some of the broadcasters that I listened to or watched back then.”

Jackson said he came up with the idea after receiving multiple requests and questions from enthusiastic students, aspiring to learn about the ins and outs of the business.

“Pretty consistently, since I’ve been established, I’d started getting emails from people reaching out, who wanted to get in the business,” Jackson said. “It ranged from young kids to people who were already in the business. I tried to respond to every one of them for at least a quick conversation and answer their questions. But I could never get to as many as I wanted to because of my schedule.”

Jackson plans to limit his one-on-one coaching to a maximum of five broadcasters at any given time, and his group sessions will include a maximum of eight broadcasters to ensure personalized attention and to maximize the participants’ experience. For those interested in learning more, they can reach out to JJBroadcastingCoaching@gmail.com. Programs, all of which are multiple sessions, start at $495.

Jackson calls his own break into the industry as “lucky” as the stars seemed to align for him. He said not everyone catches that type of break.

“People look at my career path and see I worked in my hometown and came right to where I wanted to be in Philadelphia,” Jackson said. “Most people have to travel all over the country trying to find their way to their job in sports. I got lucky that way. But if I hadn’t put forth that proposal, which looking back on was pretty bold, my internship would have ended and I would have been out of there. You can’t let the breaks come to you.”

Another break Jackson received was getting to work with the legend he would eventually replace in the broadcasting booth. Jackson was brought into Philadelphia as longtime announcer Gene Hart was inching toward retirement in the early ‘90s. Jackson and Hart overlapped for two years on Flyers coverage, and Jackson was all-ears with any advice that trickled his way.

“Obviously, I came down here knowing he was a legend,” Jackson said. “But it was awesome to be able to watch Gene and his big black book of stats. It was just full of information, and he’d carry it around and I asked him how much of that book he actually used. He said probably only about 10 percent of it. I thought it was a lot of waste. He said, ‘You never know which 10 percent you’re going to use, J.J.’ He talked about preparation all the time. You over-prepare but you never know which part of the preparation you’re going to use.”

Jackson also recalled the passionate Flyers fans’ response when Hart retired and Jackson became the new voice of the team.

“I’m probably fortunate Twitter wasn’t around then,” Jackson said with a laugh. “I got letters, and some were pretty threatening because people assumed I pushed him out, which was the furthest thing from the truth. To this day I still get, ‘You’re no Gene Hart, but you’re OK.’ He set a really high bar.”

He’s been more than OK, and Jackson has become beloved by many fans since then. He’s been the guiding light for generations of Flyers fans and found an outpouring of support when he was released from his 14-year job calling the middle innings with the Phillies this year after the team made cutbacks. The positive feedback from fans, in addition to the extra time, gave Jackson the green light to finally follow through with his broadcasting mentorship idea.

“I was flabbergasted by the response,” Jackson said. “It was overwhelming. I’m happy to have the time now with an offseason where I can put what I need into it. I’m really looking forward to helping some kids out and develop relationships and watch their careers go.” •• 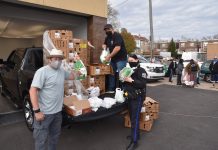