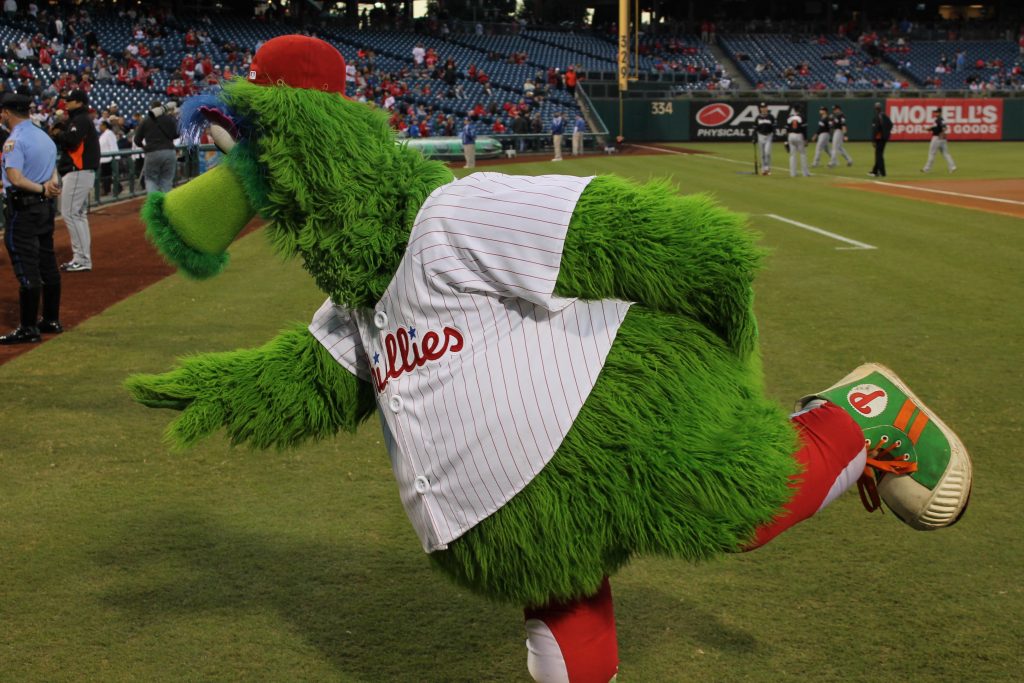 The 2021 experience at Citizens Bank Park

The Phillies are getting ready to officially welcome a limited number of fans back to baseball at Citizens Bank Park.

Guests can expect enhanced safety guidelines and protocols when attending Phillies home games, created in conjunction with Major League Baseball, the City of Philadelphia and the state of Pennsylvania.

“We are very excited to welcome our fans back to baseball,” said Phillies Director of Operations/Security Sal DeAngelis. “Our goal has always been to provide a fun – and safe – experience for all who come to our ballpark. With this, fans should be mindful of new protocols and procedures at Citizens Bank Park for the 2021 season.”

Guests should plan their trip to the ballpark accordingly by visiting phillies.com/fanhealth.

The Phillies are getting ready to safely welcome a limited number of fans back to baseball for the first 19 regular season home games at Citizens Bank Park, which includes series against the Atlanta Braves (April 1, 3-4), New York Mets (April 5-7; April 30-May 2), St. Louis Cardinals (April 16-18), San Francisco Giants (April 19-21) and Milwaukee Brewers (May 3-6).

This “soft opening” of Phillies baseball is in collaboration with the city of Philadelphia and state of Pennsylvania as well as dependent on a continuation of declining COVID-19 cases in the region.

The limited return of fans also includes the addition of health and safety protocols for all Phillies home games. Among the protocols:

“We have been diligently working with our city and state officials to finalize health and safety protocols at Citizens Bank Park. With these important measures now in place, we are excited to safely welcome a limited number of our fans back to the ballpark experience,” said Phillies executive vice president David Buck. “The unmatched energy our fans bring to the game has undoubtedly been missed, and we can’t wait to hear their cheers once again come Opening Day.”

The opportunity to attend the Phillies’ first 19 regular season home games at Citizens Bank Park was offered initially to season ticket holders. The public also has the chance to purchase tickets, available online only at Phillies.com. All tickets will be mobile.

Tickets for the remaining 62 regular season home games will go on sale in early April. The number of tickets sold for these games may increase or decrease as health conditions evolve. The Phillies will continue to consult with, and take direction from, local and state officials throughout the season.

Fans are encouraged to visit Phillies.com or follow @phillies on social media for news and updates, including ticket availability for future games. ••

Located at the First Base Gate Entrance on Pattison Avenue. For all home games, additional ticket windows are open on Citizens Bank Way.

Getting to the ballpark

For the latest traffic information for Pennsylvania and New Jersey, dial 511 or visit 511pa.com or 511nj.org. ••

Dombrowski in charge of organization

Owner John Middletown called the hiring “a great day for the Philadelphia Phillies.”

Middleton continued, “David Dombrowski is one of the most accomplished executives this great game has ever seen, and we are thrilled to welcome him to Philadelphia. Between David and Joe Girardi, we now have two of the best people in place to set us on the path back to where we want to be, and that is the postseason and contending for world championships.”

Fuld, 39, has been with the Phillies since November 2017, most recently as the director of integrative baseball performance, in which he oversaw athletic training, strength and conditioning and nutrition. Fuld spent his first two years with the Phillies as the major league player information coordinator, working closely with the coaching staff to integrate advanced metrics into the team. He also worked as an outfield instructor for the major league club.

A former major league outfielder, Fuld played parts of eight seasons (2007; 2009-15) for four teams: the Chicago Cubs, Tampa Bay Rays, Oakland A’s and Minnesota Twins. In 2009, he led all National League rookies with a .409 on-base percentage and finished fourth with a .299 batting average. ••

Anderson expected to be part of rotation

The Phillies signed right-handed pitcher Chase Anderson to a one-year contract in the offseason. He is expected to be part of the starting rotation that will also include Aaron Nola, Zack Wheeler, Zach Eflin and Matt Moore.

Anderson, 33, made 10 appearances (seven starts) for the Toronto Blue Jays during the shortened 2020 season. In 33⅔ innings pitched, Anderson had 38 strikeouts.

On Jan. 30, 2016, Anderson and current Phillies infielder Jean Segura were traded for one another as part of a multi-player deal between the Arizona Diamondbacks and Milwaukee.

Anderson was originally selected by the Diamondbacks in the ninth round of the 2009 MLB Draft out of the University of Oklahoma. ••

Gregorius back for 2nd year with Phils

The Phillies in the offseason re-signed shortstop Didi Gregorius to a two-year contract.

In 39 career games at Citizens Bank Park, Gregorius has batted .306. He has appeared in 887 games at shortstop, where he boasts a .978 fielding percentage, the fifth-best among players with at least 800 games played at the position since 2012.

A native of the Netherlands, Gregorius was originally signed by Cincinnati as an amateur free agent in August 2007. He joined the Phillies in December 2019 on a one-year contract. ••

Realmuto back for 5 more years

In a major offseason decision, the Phillies re-signed catcher J.T. Realmuto to a five-year contract, taking him through 2025.

In 2019, his first season with the Phillies, Realmuto hit .275 and reached career highs with 36 doubles, 25 home runs and 83 RBI in 145 games en route to winning his first Gold Glove Award.

The 2019 season also saw Realmuto throw out a career-high 37 runners attempting to steal, which led all major league catchers and was the most by any Phillies catcher since 1993 (Darren Daulton).

Originally selected in the third round of the June 2010 draft by the Marlins, Realmuto was traded to the Phillies on Feb. 7, 2019, in exchange for catcher Jorge Alfaro and pitchers Sixto Sánchez and Will Stewart. ••

Moore back in the majors with Phils

The Phillies signed left-handed starter Matt Moore in the offseason to a one-year contract. He is expected to be part of the rotation.

Moore, 31, last pitched in the majors in 2019 for the Detroit Tigers, where he made two starts and tossed 10 scoreless innings with nine strikeouts to one walk. Last season, he pitched professionally for Fukuoka in the Japan Pacific League. He appeared in 15 games and posted a 2.65 ERA (25 ER, 85 IP) with 98 strikeouts to 26 walks.

In 2011, he won the Spink Award as Topps Minor League Player of the Year and was also named the MiLB.com Minor League Starting Pitcher of the Year. He represented the United States in the MLB Futures Game that year and following the season he was named the second-best prospect in minor league baseball by Baseball America.

The Phillies are expanding the team’s Mental Performance department in a continued effort to support players and staff throughout all levels of the organization.

“I’m incredibly excited to see the positive influence that Ceci will have on our players, coaches and staff. Her past experiences in baseball and the military make her particularly well-suited to optimize mental performance in high-pressure environments like the one that we compete in,” said Fuld, the team’s general manager. “Ceci is viewed throughout the industry as a leader in her field, and as we went through the interview process, it became clear why. Her intellect, empathy and enthusiasm immediately stood out to us, and we feel lucky to add her to our team. She and the rest of the department are poised to make a tremendous impact in our organization.”

Craft’s educational background is in applied sport science with a focus in sport psychology from the University of Bangor, Wales. She attended Bates College for her undergraduate studies, majoring in psychology and minoring in Spanish. Craft is also a Certified Mental Performance Consultant.

Huesman joined the Phillies in January 2018 as the team’s minor league mental skills coach. She brings eight years of mental skills experience to her new position and will work closely with Craft on creating and executing plans with players and the coaching staff. Huesman received a bachelor’s degree in health and human performance from the University of Tennessee at Chattanooga and a master’s degree in kinesiology from the University of Tennessee. She is also a Certified Mental Performance Consultant.

“Hannah has established herself as an invaluable member of the Phillies organization, and we’re thrilled to promote her within the Mental Performance department,” Fuld said. “Hannah brings energy and commitment to her work in a way that raises the bar for everyone around her, and she has shown a strong ability to collaborate and connect with players and staff alike. We’re eager to see Hannah continue to grow her skillset and influence as she takes on this new, well-earned role.” ••

The late Phillies president and CEO David Montgomery will be honored in July with the Buck O’Neil Lifetime Achievement Award.

Due to the ongoing safety concerns associated with the COVID-19 pandemic, 2021 Hall of Fame Weekend ceremonies will take place as indoor television events, adhering to all of the required New York state guidelines.

The Hall of Fame’s 2021 induction ceremony will take place live on MLB Network on Sunday, July 25, beginning at 1:30 p.m., honoring the members of the Class of 2020: Derek Jeter, Marvin Miller, Ted Simmons and Larry Walker.

Montgomery is the fifth recipient of the John Jordan “Buck” O’Neil Lifetime Achievement Award. He worked his way up from the Phillies sales office to become executive vice president and chief operating officer before acquiring an ownership stake in the team. He later served as president and CEO and then assumed the role of chairman in 2015.

Under his leadership as president and CEO, the team enjoyed one of the longest sustained periods of success in franchise history from 2007-11, winning five consecutive National League East titles, two NL pennants and the World Series in 2008.

He also spearheaded the construction of Citizens Bank Park, which opened in 2004. He advanced many community service efforts for the Phillies, including helping raise more than $19 million for the ALS Association of Greater Philadelphia.

Last year, both the induction ceremony and awards presentation were canceled due to the pandemic.

The National Baseball Hall of Fame and Museum in Cooperstown, New York remains open daily from 9 a.m. to 5 p.m. A comprehensive health and safety plan for the museum was developed and has been implemented in accordance with guidelines provided by the Centers for Disease Control and Prevention and New York state, and reviewed by a certified industrial hygiene technician, to ensure cleanliness, physical distancing and reduced contact for visitors and staff. More information about visiting the Hall of Fame can be found at https://baseballhall.org/reopening. ••

Life in the Minors, 5th Annual Phillies Minor League Digest, is a historical book that details the franchise’s minor leagues from the first affiliate in Hazleton to the current structure.

The 355-page book, filled with more than 170 photos, many of historic significance, is available now in both color and black and white on Amazon. A portion of the proceeds will go to Phillies Charities Inc.

Steve Potter, a retired Pfizer executive, first published an annual Minor League Digest following the 2016 season, detailing a recap of the Phillies minor leagues and players. Without minor league baseball in 2020, Potter and Larry (Baron) Shenk, a retired Phillies executive, combined to produce a book capturing the history of 115 Phillies minor league affiliates. The foreword is written by Tom McCarthy, who began his broadcasting career as the voice of the Trenton Thunder. Jim Peyton is the editor.

Plus, there are stories from Frank Coppenbarger and Scott Palmer, who each played one game in the minors even though they weren’t professional ballplayers.

“My career concluded with the Phillies, but I intermingled with many of their legends when I was a minor leaguer,” said Pat Gillick, Hall of Fame executive whose playing career is featured in the book. “My first manager was Billy DeMars. In every league I played, the Phillies had a team.

Additional stories are included from other minor league personnel, including managers, coaches, executives and broadcasters.