What should Flyers do with Giroux? 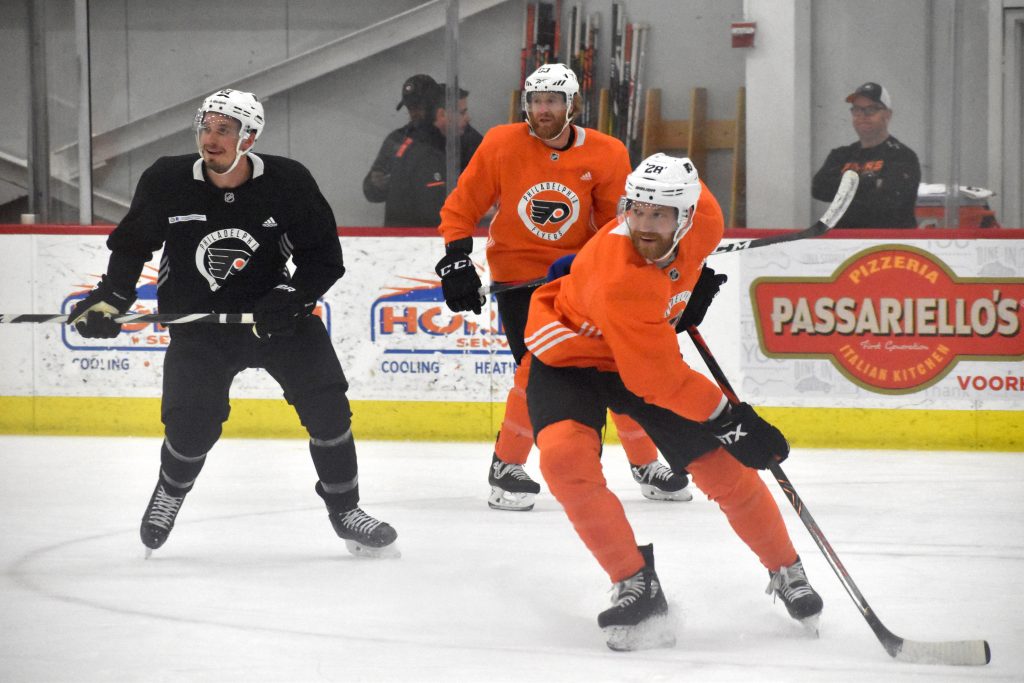 Each time Claude Giroux hits a milestone or passes a big name on the franchise’s scoring list, the questions resurface.

Is Giroux one of the best Flyers ever?

Should the team cut ties with a guy who has failed to lead the team beyond the second round of the playoffs?

Claude Giroux’s time in Philadelphia will seemingly be polarizing, as he is known for both dazzling the pants off of people during the heights of his career, and shouldering the blame for not rescuing underperforming teams throughout his tenure.

The Flyers will soon reach a crossroads with Giroux, as he will become eligible for a contract extension this summer with one more year remaining on his current term at $8.275 million a year.

It will be interesting to see how far into the year the Flyers and Giroux would be willing to wait before negotiating, especially with a potentially active offseason awaiting.

They already know what they have in Giroux. He’s a guy who is going to produce around 60 points for the next few years, and maybe even more if the power play starts clicking again. After scoring twice in the waning moments to tie the game against New Jersey on Sunday, Giroux has 13 goals and 22 assists in 46 games this season, which would put him at a 62.4 point pace per 82 games. Giroux is no longer an elite scorer but those numbers are not insignificant, especially if slotted correctly on the roster.

What the Flyers might not know is what they have in this team, which will ultimately decide which direction they go with core players like Giroux. Changes are coming but how deep will they be?

Most of the high-ticket players, like Jakub Voracek, Kevin Hayes and James van Riemsdyk, are locked in and tough to move. Giroux is somewhat movable this offseason if he wishes to be moved. He carries a no-movement clause in his contract and has recently said to the media that he’d like to retire as a Flyer.

And if Giroux is willing to come back at a sharp discount, they could probably make it work financially. Giroux is now third all-time in points as a Flyer and is second in both games played and assists. Next year, he could become just the second player in team history to play 1,000 games in a Flyers uniform.

The next dilemma in bringing back Giroux depends on how much of a change is needed in the leadership of the team going forward. Giroux has been captain since 2013, and the Flyers have made it out of the first round of the playoffs only once under his captaincy, and they will miss the playoffs for the fifth time in nine years once this season concludes.

Some would argue the team needs a new voice in the form of a new captain, passing the “C” to a younger player on the team to shake up the current state of things. There’s nothing stopping the Flyers from doing it while Giroux is still here. And there’s no shame in it, either.

Some of the greatest names in hockey have had the “C” pulled from their sweater, including Joe Thornton, Joe Sakic, Mike Modano, Brett Hull and Chris Pronger. Heck, the Flyers did it with Eric Lindros. Even Los Angeles’ Dustin Brown lost his captaincy after leading the Kings to two Stanley Cups in three years. He’s still there and still producing.

If they go a similar route with Giroux, it would be one small step in changing the guard when bigger changes are likely needed. Letting Giroux walk after next season would be enormous, given his status among the greats in the franchise. However, over the years, not many players have been given the chance to ride off into the orange sunset and retire as a Flyer after giving their heart and soul to an organization the way Giroux has.

A few of the Broad Street Bullies-era guys have done it, like Bobby Clarke, Bill Barber and Bernie Parent, but not too others have accomplished it over the last 30 years. Eric Desjardins is a rare case that comes to mind. Chris Therien was traded to the Dallas Stars but returned a year later to retire as a Flyer. Keith Primeau technically counts but his career ended prematurely due to injury. Giroux would be attempting to join a very short list.

Had the Flyers taken the expected next step and reached the conference semifinals or even the Stanley Cup final, the discussions around Giroux’s future would probably be different.

Fair or not, the captain usually goes down with the ship. Next season could decide how high those waters rise. ••