The National Hockey League’s offseason officially arrives this week for all 32 teams including the brand new Seattle Kraken.

There will be a lot of musical chairs when it comes to player personnel in the coming weeks with the Expansion Draft (July 21), NHL Entry Draft (July 23-24) and the start of free agency (July 28).

The Philadelphia Flyers have obvious needs after missing the postseason for the fifth time in nine years. We don’t know yet whom the Flyers will lose in the expansion draft, but the franchise is in pretty decent shape when it comes to protecting its key players.

What we do know is the Flyers’ No. 1 need heading into the offseason is securing a difference-making top-four defenseman. The Flyers have been linked to Columbus’ Seth Jones but the asking price seems to be high despite the fact the Blue Jackets would lose him for nothing at the end of next season. General Manager Chuck Fletcher might be willing to pay the price if Jones would agree to sign an extension but so far there has been no confirmation that he’s willing to do that here or anywhere else. If he did, the Flyers would need to move money out both in the short- and long-term to make room for his $5.4 million salary next year and the hefty raise he would likely get.

One of the reasons Jones might not have been moved already is the fact that his new team would need to protect him from Seattle in the expansion draft so a trade might not be made until after July 21. Until then, we sit and wait.

But while we wait, we can ponder some other possibilities for the Flyers to make an addition on the back end. Here’s a list of other defensemen who could be available this offseason.

Matthew Dumba, Minnesota: Dumba seems to be on the trade block and has two years remaining at a $6 million cap hit. The Wild already have three defensemen they must protect due to no-movement clauses, leaving Dumba exposed or putting the team in a position where they could protect only eight total players and a goalie. The problem with trading for Dumba is the Flyers don’t have room on their protection list, either. It would likely leave Philippe Myers or Travis Sanheim exposed and the Flyers probably don’t want to do that.

Mattias Ekholm, Nashville: At the trade deadline, Ekholm was a big draw for many clubs but the Predators’ price was high. It seems Nashville is now working on extending Ekholm so it might be tougher to pry the 6-4 Swede via a trade this offseason. He is also due a significant raise from his $3.75 million salary.

Oliver Ekman-Larsson, Arizona: If you’re into tall Swedes, Ekman-Larsson (6-2) is available as the Coyotes look to overhaul their roster in a rebuild. Ekman-Larsson is now 29 and has six years remaining at a $8.25 million cap hit. The Coyotes’ captain has had a quietly good career but that cap hit and term could be a killer down the line. If he had a better contract, there would be a lot of hype here.

Ryan Ellis, Nashville: His name has also been linked to the Flyers and is worthy of top-pairing consideration. He’s 30 now and has six years remaining at a $6.25 million hit. At just 5 feet 10, Ellis contributes both offensively and defensively and is one of the most intelligent defensemen in the league. He can produce on the power play and kill penalties. Think Kimmo Timonen, who coincidentally also arrived via trade from Nashville. He wouldn’t come cheap in a trade, though.

Mark Giordano, Calgary: If you’re looking for a short-term fix, you could do a lot worse than this absolute warrior who plays for the Flames. He’ll be 38 by the time the next season starts but he has just one year left on his contract that pays $6.75 million. Giordano was considered a late-bloomer in the NHL, playing his best hockey throughout his 30s. He won the Norris Trophy  in 2019 when he recorded 74 points in 78 games. He’s another all-purpose defender with leadership skills. Has he lost a step? Sure. But he could certainly be a valuable player as a stopgap and a mentor for a year or two.

Dougie Hamilton, Carolina: Hamilton is inching closer toward unrestricted free agency this summer and will likely demand a hefty salary at a long term once his new contract is signed. He’s the potential big fish of free agency this year and the Flyers would need to create cap space before they could even entertain the idea. Seems like a long shot but he’d look great in orange and black.

Alec Martinez, Vegas: Martinez willed his way through the playoffs on a broken foot for the Golden Knights, and blocked the most shots through three rounds, which certainly says a lot about his character. He was also a two-time Stanley Cup winner with the Los Angeles Kings. He’s now an unrestricted free agent.

Rasmus Ristolainen, Buffalo: He seems to play well against the Flyers but his analytics are not very good for the amount of ice time he logs. One year left at $5.4 million and then it would be decision time. The Flyers would probably do best to avoid the big Fin.

The others: There are plenty more unrestricted free agents who are a little lower in the pecking order. They may not be top-pairing guys but could provide some depth at the right price. Tyson Barrie (Edmonton), Erik Gudbranson (Nashville), Travis Hamonic (Vancouver), Brandon Montour (Florida), Ryan Murray (New Jersey), David Savard (Tampa Bay). •• 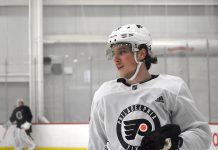 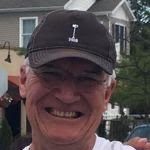 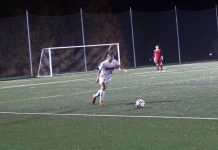