Nazareth Star Chasers are breaking barriers and shooting for the stars

A team of Nazareth Academy High School students is breaking barriers in the STEM field by literally shooting for the stars.

According to the 2020 Census, despite women making up nearly half of America’s workforce, they account for only 27% of the STEM workforce.

The Naz Star Chasers are students who design and build rockets to compete in a national competition. The group started five years ago and has won five awards — one for each year they’ve competed in the American Rocketry Challenge. The ARC features 5,000 students nationwide who take part in the competition.

Guided by their teacher Greg Severino, or Mr. Sev., the girls work in the newly opened Innovation Center at Nazareth, where they have all the equipment needed to design and build functional rockets.

“Whatever engineering dream they have, they can make it a reality,” Severino said. “That’s the beauty of our technology down here.”

Before the lab officially was opened, they had to buy more parts and work in makeshift labs throughout the school, pretty much setting up wherever was open. Now, instead of buying pieces and parts that may not even work, they can make their own. The only parts they have to purchase are the engines and components; which they purchase from Estes Rockets.

“Estes [Rockets] really works with the students,” Severino said. “They love what the girls are doing and really help us out.” 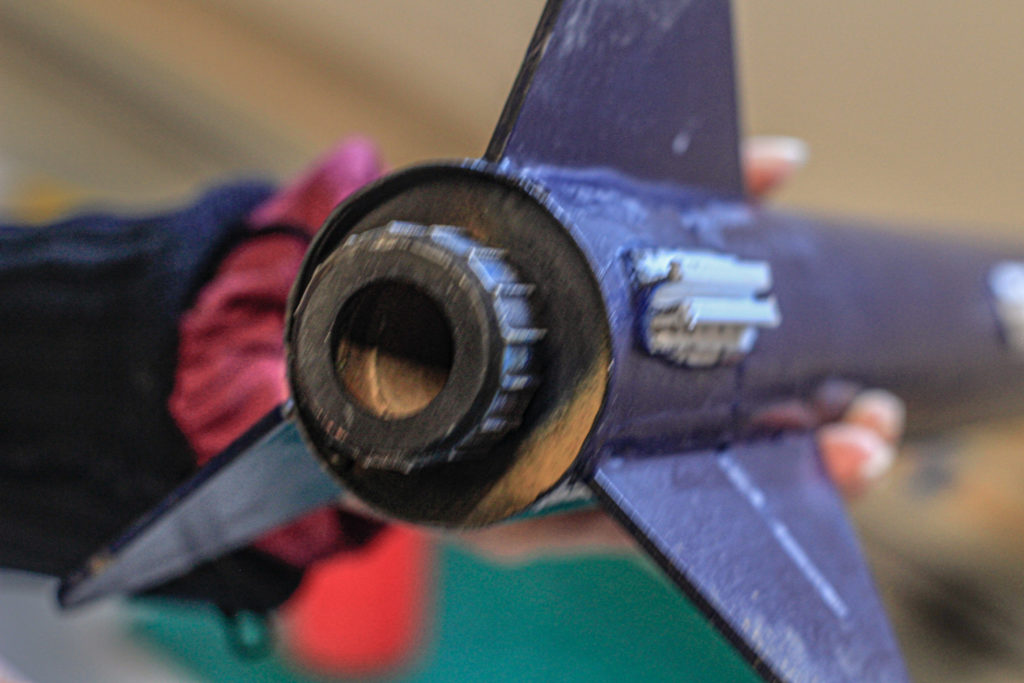 The cap on the end of the rocket holds the igniters connected to the engine. The lab has computers with software to input their designs and cut and 3D print pieces for their rockets. After that, it’s trial and error, as they test and retest, recording their data each time, and adjusting their rocket to account for all conditions.

The girls have to account for conditions such as the wind and launch timing, plus prepare for anything that might go wrong. For example, one time, the fin of their rocket broke. The girls had to be ready for something like that to happen, and, using previously collected data, they figured out which rocket to use.

“The more information you can get about the rocket, the better,” Marissa Stauff said. “Get as many flights as you can so you can get as much information as possible.” Severino helps the girls out by accounting for different situations to prepare them for the competition.
The students spoke of how the Rocketry Club will help them in all aspects of their futures because it teaches them to think critically and problem solve.

“Critical thinking, problem-solving is something you’ll need in your everyday life,” Mankar said. “This program really does refine your abilities and almost perfects them in a way to make those, like, split-minute decisions.”

The girls on the Rocketry Team are vast proponents of encouraging more women to work in STEM, describing themselves as more of a family with a huge support system of parents, teachers, other students and rocket enthusiasts.

One of the students said that women who want to be involved in STEM shouldn’t be intimidated because other women in STEM are very supportive. After all, they’ve been there and experienced those feelings.

“I think a big part of it is we all value rocketry so much, and I think I can speak for everyone here that outside support helps us the most in flourishing, keeping this program alive and promoting us to do our best,” Marissa Stauff said. ••