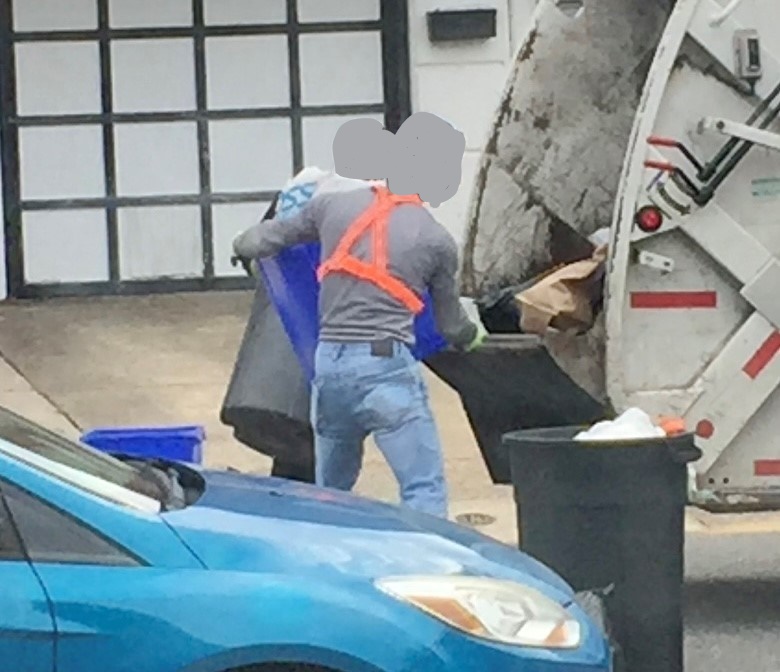 Why are we still spending time separating our trash from the recyclables when they are not being recycled? This picture clearly shows the workmen dumping both a trashcan and a blue recycling container into the hopper of the same truck. Their faces are obscured because it isn’t their fault; they just follow the orders of the higher-ups. This isn’t happening every week, perhaps every other. However, it shouldn’t be happening at all.

At one time in the past, there was an editorial that blamed the baby boomers as the woe of everything today.

The baby boomers were accused of driving up the federal deficit and creating the largest debt in America. In actuality, during Obama’s eight years, he raised the debt to $20 trillion, the most ever by one president. And here we are under Biden’s presidency, and Biden is continuing Obama’s legacy with his own trillion-dollar spending bill.

And at one point, Facebook’s Mark Zuckerberg was the hero of the millennials for bringing about social media, tweets, posts and Instagram. But now Facebook is facing allegations of spreading hate and misinformation.

Social media didn’t bring people together and didn’t make the world better, it made it worse. They blamed the baby boomers for the problems of today, but what I see is the internet produced a lot of nasty and angry people full of angst.

At least I can say I was proud of my generation being the baby boomers of the Flower Power generation, instead of what I am witnessing today as society’s morals went down the toilet.

Don’t blame the baby boomers as much as the hate and destruction of today’s Angst generation.

Gordon Klein, who has taught for 40 years at UCLA, was recently suspended for racism by the ultra-progressive woke, critical race theory, cancel culture advocates. Here was Klein’s defense: A non-black student suggested that the grade his black classmates were awarded should reflect greater leniency. He added that considering George Floyd and the effect of COVID-19 on the black community, the final be a “no harm” exam, meaning it should be counted only if it boosted one’s grade. Klein responded that he thinks all human beings should be treated the same. He added that he felt that the suggestion struck him as deeply patronizing and offensive to the same black students the student claimed to care so much about.

Klein asked, “Are there any students that may be of mixed parentage, such as half-black, half-Asian? What do you suggest I do with respect to them? A full concession or just half?” How do you treat a faceless student taking the course online?

To some, Klein’s words seemed to be an insensitive and bigoted response. A  petition went out  demanding he be fired. Within a day or two, nearly 20,000 had signed the petition without knowing anything about considering race in grading. He was attacked for being a white man and “woefully racist.” Three days later, he was suspended amid a growing online campaign. One email read in part: “You are a typical bigoted, prejudiced and racist dirty, filthy, crooked, arrogant … Jew! Too bad Hitler and the Nazis are not around to give you a much needed Zyklon B shower.” Talk about being racist. The cowardly dean suspended and banned Klein from campus. Soon, Klein said the  administration started attacking his character on social media. Rational voices came to his defense. UCLA’s Academic Senate’s Committee on Academic Freedom condemned the administration for violating his rights. Then, 76,000 concerned individuals from around the world signed a petition demanding his reinstatement.

An American who just happens to be black wrote to Klein, ”I am insulted by the letter written by one of your students. The worst kind of racism is the racism of low expectations. I’m still amazed at white liberals, who in general, think they need to come to the aid of black people just based on their skin color. Nothing could be more insulting. White liberals are the most dangerous species to the success of black people as a whole … I will encourage you to continue to stand for what is right. I understand the temptation of many decent black Americans to view these people as their advocates and supporters but they are false supporters and the real racists.”

Klein noted that he had been consulting to law firms and other corporations. Several of those firms dropped him after he was suspended. That cost him a major share of his annual income. Cancel Culture at its worst.

I have never seen a time in which our country is so divided on almost everything — but here’s one issue that we can all rally around.

A few days ago, I got a call that my credit card had suspicious activity … with the usual “call this

number” immediately Then I got the same warning again.

In one hour, I was called eight times with fake phone caller IDs listing everyone from the local

Acme to “Little N” to talk show host Mark Levin. I wonder if the caller was in Camden, or Uzbekistan.

I cannot understand why a country that can place rovers on Mars cannot control phishing phone calls, let alone all those unwanted sales calls. Is it all about telecom campaign contributions?

Those eight calls nearly filled up my answering service — suppose there was an emergency and someone had to leave me a message? And how about those poor souls who actually call back and have their account info stolen?

To all politicians out there — want to be heroes? Then legislate an end to phone “spam and scam” abuse. We’ll all stand up and cheer, and maybe even call … but only to thank you.

At least we figured out what the school district has been for the last year and a half. They supposedly solved the equity problem from the magnet schools. Now maybe they can solve the real problems in the district. In the last 18 months, they haven’t solved getting to school on time. They haven’t solved the problem of the same students being in a safe environment when they get there. We have the same schools falling apart and containing asbestos. We have no bus drivers but we will have equity in 5 or 6 schools. What’s the cost of this equity? Wouldn’t it better to start this process from the lower grades to begin with? Is it the best and brightest students leaving the system for private and charter schools because equity forced them out. How about if we get back to basics and just get the children into safe classrooms on time. But from the looks of it, that isn’t on the school district’s agenda.