Through the weekend, the Flyers had played 13 of their 82 games on the regular season schedule. We’ve seen a few inspiring wins, a couple of duds and just about everything in between. It’s a small sample size, representing about 16 percent of the season, but let’s take a look at a few early observations:

Hart is back: After a bad season last year, which accounted for only 27 games, goaltender Carter Hart is back in good form, sporting a .931 save percentage, which ranked seventh among goalies this season who have played at least five games.

Strangely enough, the Flyers actually have a losing record with Hart as a starter this season, as he is 4-3-2 in his nine starts. Hart has allowed a stingy 2.32 goals per game but in Hart’s last five starts, the Flyers have scored a total of seven goals and have been shut out twice.

The power play is powerless: Through the weekend, the Flyers were clicking at just 17 percent, which normally isn’t too terrible. But early-season games typically yield more goals, as teams are still figuring out their defensive structure, and Philly hasn’t taken advantage. The Flyers rank tied for 22nd in that category. Most of the teams below them are either bad (We’re looking at you, Arizona, Montreal and Seattle) or have been missing significant star players from their lineup that make the power play go (Pittsburgh, Colorado, Vegas).

Recent seasons haven’t exactly been kind, either. Last year, the Flyers finished 18th in power play efficiency and they haven’t had a top-10 finish in the last six years.

Braun excelling on top pairing: Not known to be an impact player on the scoresheet, stay-at-home defenseman Justin Braun has had an incredibly good start to the 2021-22 campaign. Braun, 34, has scored a goal, added seven assists and was a plus-6 through his first 13 games while being among the league leaders in blocked shots. Even more impressive, Braun has filled in on the top pairing alongside Ivan Provorov seamlessly as Ryan Ellis recovered from injury.

Braun’s shining moment this season might be a 5-3 victory over the high-flying Edmonton Oilers, contributing a pair of assists and finishing with a plus-4 while logging 23:42 in ice time against Connor McDavid and company — not bad for a guy making just $1.8 million against the salary cap.

Doughnuts for Lindblom, Yandle, Sanheim, Ristolainen: Together, they’ve fired 75 shots on net without beating a goaltender. That won’t last long, as each player has a pedigree of offensive skill to their game. Yandle has 25 shots on net while serving as the quarterback on the top power play for stretches of the season. Although he’s a pass-first player, he’s bound to sneak one through at some point soon. Lindblom has had a frustrating start but was recently given some power play time to help him out of his slump. Lindblom scores most of his goals from the dirty areas so it might just be an ugly deflection goal off a shin pad to get him going. Lindblom has 72 career points in 197 games. He has just one assist in his first 13 appearances this year.

Giroux nearly point-per game: He’s cooled off a bit, going pointless against Toronto, Carolina and Dallas, but Claude Giroux is just shy of a point per game with a dozen points through 13 games. A pending unrestricted free agent, Giroux hasn’t accomplished point-per-game status since the last time the Flyers played a full 82-game season in 2018-19 when he had 85 points in 82 appearances. The season prior was Giroux’s highest total at 102 points. Over the last two seasons, Giroux has a combined 96 points in 123 games. ••

Bell goes out a winner at Ryan 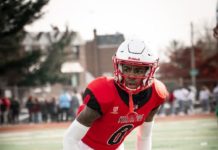