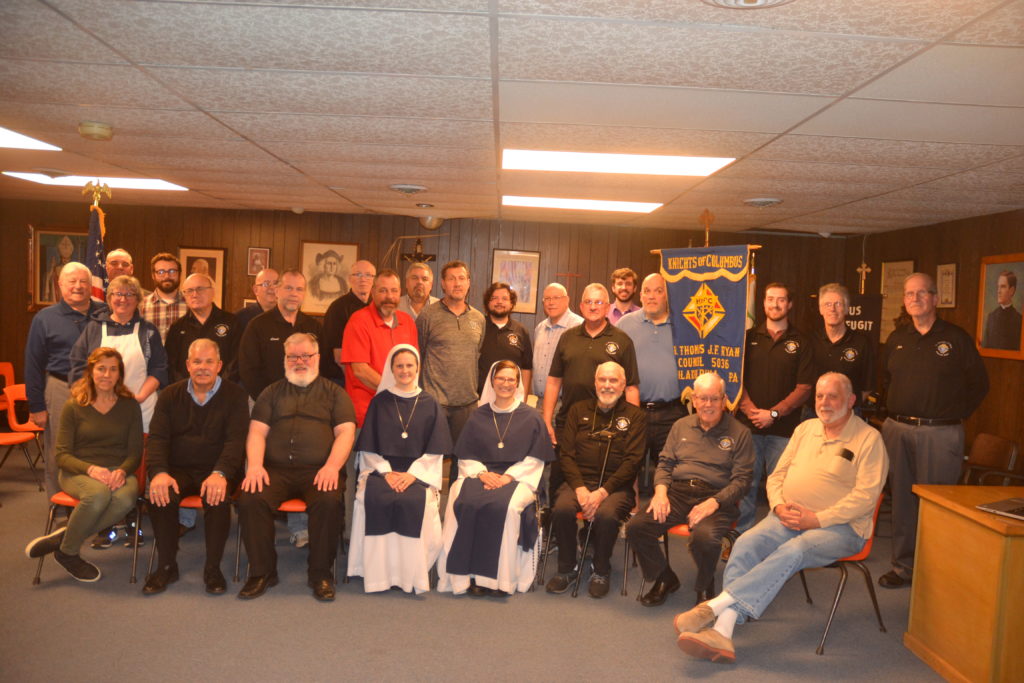 Knights of Columbus Council 5036 last week donated $2,500 to the Philadelphia Visitation Mission of the Sisters of Life during their monthly meeting at their hall, 9090 Old Bustleton Ave.

The money to the Sisters of Life includes $500 from an anonymous St. Cecilia parishioner and $1,500 from a Stock’s pound cake sale at Maternity BVM.

Chuck Kuhar, the Grand Knight, said a KOC member who died left $1,000 to the Council. That money will be divided evenly between the Sisters of Life and the Special Olympics.

Sister Maeve and Sister Gemma accepted the donation, and said they will pray before deciding how to spend the money.

The local Sisters of Life consists of five members who live at the convent at St. Malachy, 11th and Master streets.

KOC Council 5036 has been supporting the Sisters of Life since meeting them in 2015 when Pope Francis was in Philadelphia.

The Sisters of Life are a Roman Catholic community of women religious who profess the three traditional vows of poverty, chastity and obedience and a fourth vow to protect and enhance the sacredness of human life. Founded by Cardinal John O’Connor in New York in 1991, their missions include serving women who are vulnerable to abortion, giving them the support and resources to be able to choose life for themselves and their children; hosting weekend retreats; evangelization; and helping women who have suffered after abortion to encounter the mercy and healing of Jesus. ••