I have researched Rep. Hohenstein’s sponsored bills, HB 1841 and HB 1910, and I think that they are great additions to further protect our police institutions from bias and recklessness once fully implemented. Following this research, I really agreed  with what he said in an interview with the Northeast Times, “I believe the key to resolving the divide on this issue is for each side to recognize that the other side has a piece of the truth, and that there is an even greater segment of the population who don’t have a strong opinion but simply want neighborhoods that are safe and secure.” Has this statement come to fruition and does police reform reflect the opinions of all sides on the matter? I am hoping that he will be able to provide an answer as change doesn’t come so quickly, but it should occur gradually at the very least.

I am also supportive of HB 2009 to instate and fund a research center for gun violence in Pennsylvania. I think it would be very helpful to uncover the root of gun violence in the area, but how does he plan to curb it? Does he have plans to reduce gun violence in our state and to maintain that statistic in a safe range? There are news stories almost everyday all over the country about gun violence and even more on racial hate crimes amid the recent events that occurred. I hear stories from my community of how they were targets of racial hate. There is a real possibility that one of these instances may result in violence or even a lethal outcome based on gun violence statistics. I know that is a large problem to fix, but I do believe a gradual change to a safer society is possible, regardless of the time taken. So I’d like to ask Rep. Hohenstein what he will do to protect his constituents in these times.

Thank you to senior care workers

While many of us are celebrating the holidays with our families, please take a moment to thank the many dedicated and brave workers at Pennsylvania’s senior care facilities, including nursing homes. Since the pandemic began in March 2020, nursing homes have been Ground Zero for the virus. What may surprise some is that the pandemic remains a very real risk to nursing home residents and workers.

Yet, day after day, workers show true professionalism by caring for Pennsylvania’s most vulnerable citizens, even when many of us are home enjoying the company of our loved ones. Let’s take a moment to think of them and all of their sacrifices since the pandemic began because those sacrifices continue.

The school board is allowing Superintendent Hite to complete his contract despite all the major problems under his regime. There may be more school district failures because the board wants to silence any employee leaks of information to us taxpayers. They want their “spin doctors” (communications) to only speak with the press to put the district in the best light. This is not a game. It is our money and our children’s lives at stake. In 2022, they should clean out the entire Hite regime and Kenney’s puppet school board.

DA Larry Krasner is sleeping with the enemy, George Soros and criminals. Cousin Larry stated that in Philadelphia, there is no crime surge right now. This man has to be smoking dope or or is a dope himself (no, he stands for Marxism). Just look at the homicide rate in the city, all-time record over 535, and other violent crimes such as robbery and armed carjacking. I would like 7 minutes with Cousin Larry and ask him to show me on paper how he came to the conclusion that crime is OK, and to look the other way. I would bet he never served a day in the military. I think homicide is still a crime.

To quote our beloved district attorney, “We don’t have a crisis of violence.” Maybe he should get his head out of the sand. According to him, it’s safe for tourists to come to our fair city because “other violent crime categories are down.” How would you know if other violent crime is down when he either drops or reduces the charges. He takes the gun out of gun charges. You can play games with statistics all day long but it still comes down to the perception that this city is unsafe anywhere you go. Of course, he’s safe walking around with armed bodyguards. It’s time for him to stop the double talk and step up to his job. As should his partners in crime, the invisible mayor and police commissioner.

Here’s another fine mess Mr. Biden has gotten us into. From wide open borders to the blunder of Afghanistan. In the meantime, Americans are being enforced strict mandates for vaccinations and passports, while the migrants are getting a free pass over the border as well as thousands of Afghan refugees being airlifted, leaving hundreds of Americans stranded in a hostile country.

And then there’s the mess of Afghanistan. This is what happens when you cheat, the whole world goes to hell. We went from Trump’s “Make America Great Again,” to Biden’s “Make America Dead Again,” from a feckless and incompetent leader. So to all those people who disliked Trump because of his tweets or a comment from one individual who didn’t like “his disgusting mouth,” here’s my impersonation of what’s coming out of Biden’s mouth: “Here’s the deal. Duh.”

In response to Jiahao Xu and Benjamin Steketee’s opinion posts Dec. 1, I am glad to see young people getting involved with the issues that face our world. Fresh ideas are needed.

To Jiahao, I agree more money is needed. But let’s make sure real education is being taught. One way is school choice. I also agree with higher minimum wage. But know this, many in my generation worked at minimum wage. It was our foot in the door, to learn a new trade.

To Benjamin Steketee, if China and India continue to pollute, zero emissions in the U.S. would have no real effect. But there may be a way to have our cake and eat it, too. On Netflix, I watched a documentary about sustainable farming narrated by Woody Harrelson called Kiss the Ground. I don’t know how true this science is behind it, but if it is true, I hope your generation brings it to light. 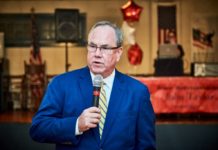