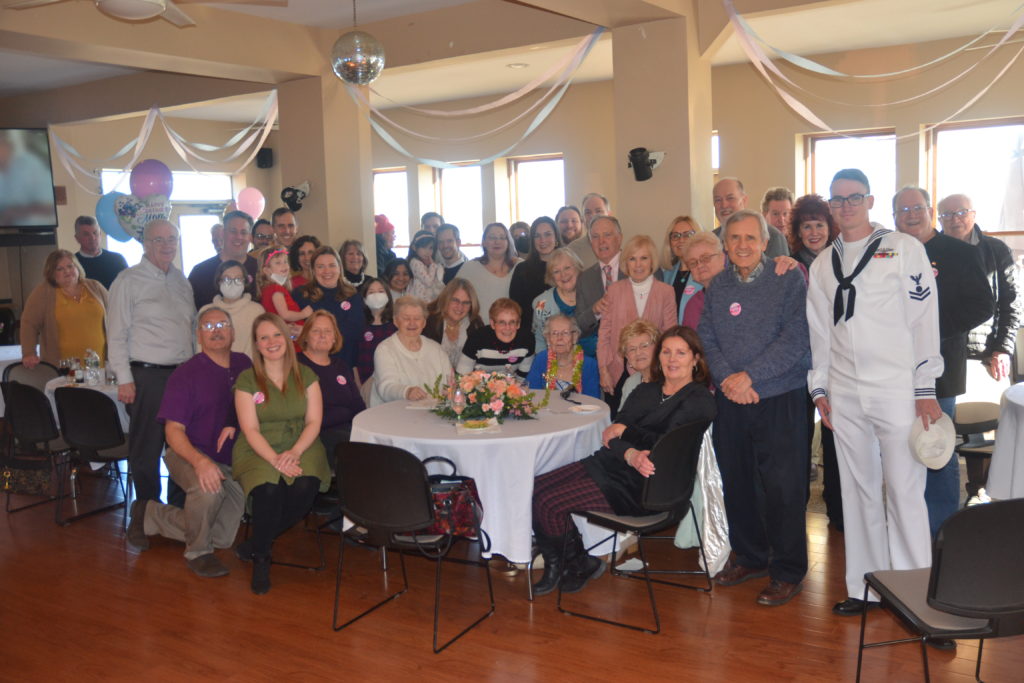 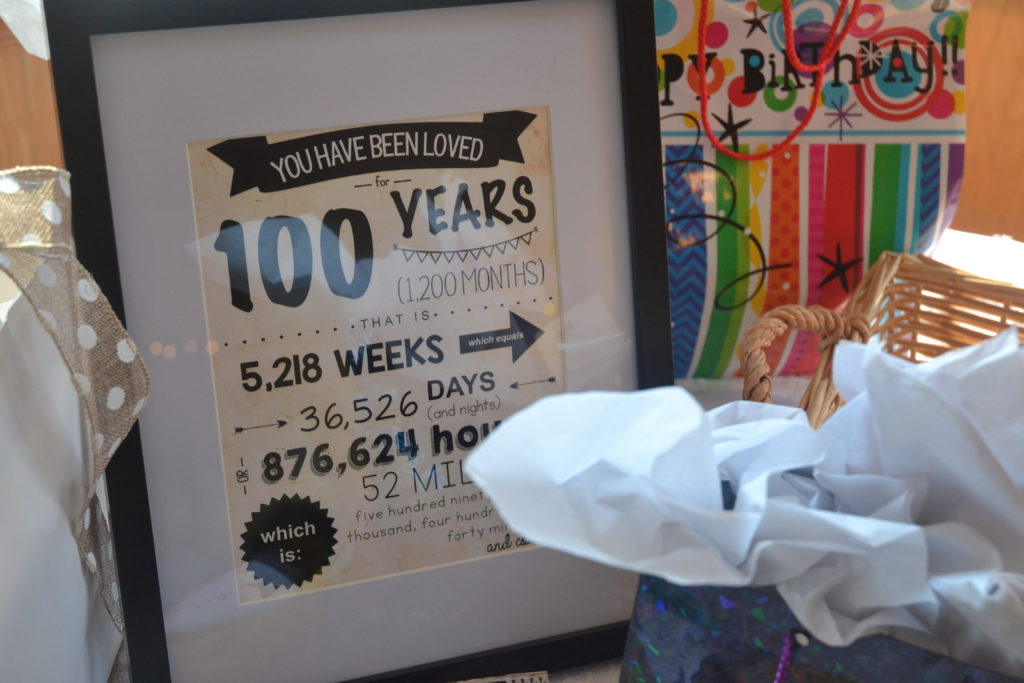 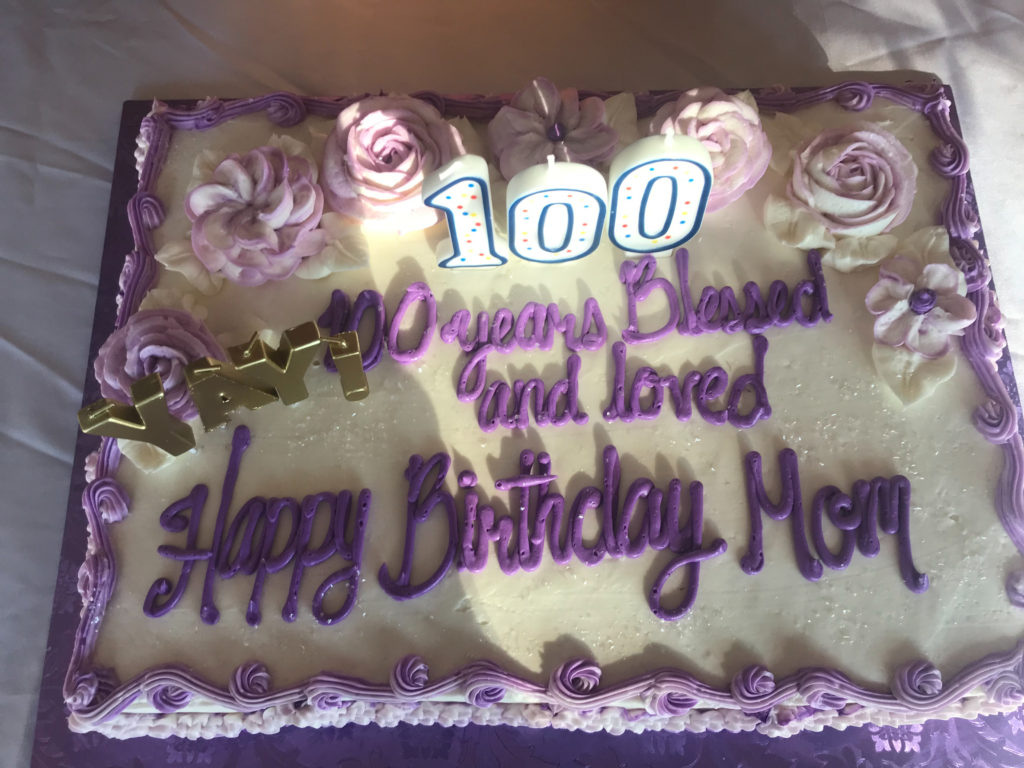 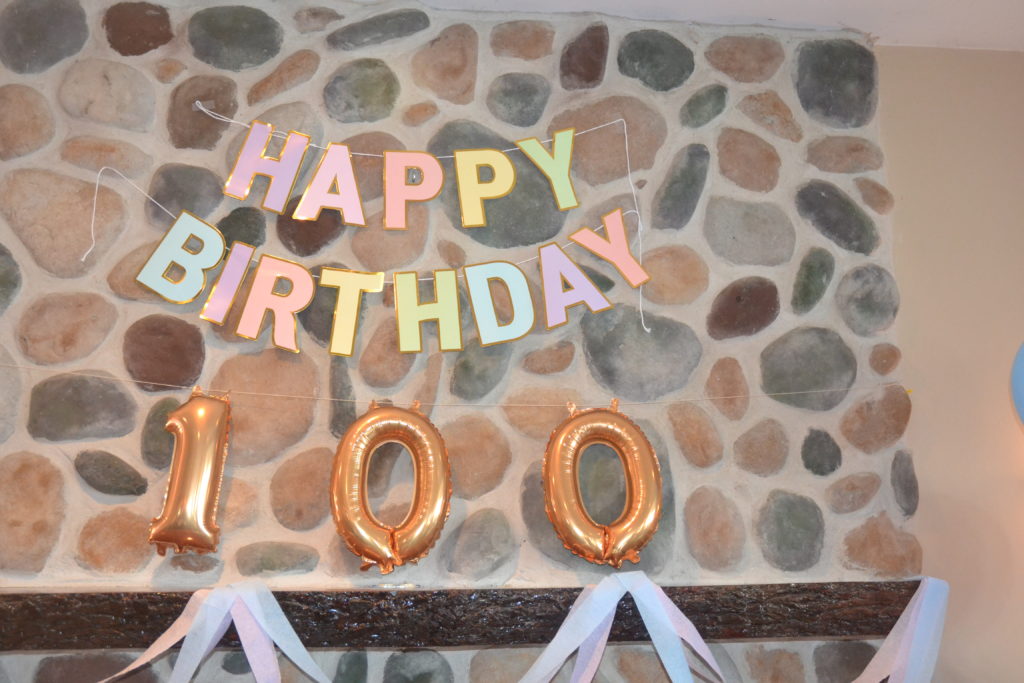 The bash took place two days before her milestone birthday at Columbus Country Club, on State Road, in Bensalem.

Guests enjoyed food, drink and birthday cake. The clubhouse was decorated with balloons, and a TV screen showed a loop of pictures of the birthday girl over the years. She received plenty of cards and gifts, along with a nice flower arrangement.

During a champagne toast, she was described as “one of the greatest women God ever put on Earth.”

Jane had a great time mingling with friends and family, many of whom traveled from out of town.

“I didn’t know the party would be this big,” she said. “I’m surprised to see all these people.”

A mock newspaper front page from that day showed that others born in 1922 included Betty White, Judy Garland and Doris Day. A loaf of bread cost a nickel. Warren Harding was president.

Jane Hackett grew up in Drexel Hill, and graduated in 1940 from the old Holy Child, a high school in Sharon Hill.

Jane later moved to Mayfair. She worked as a secretary at a Center City insurance company. She met a Mayfair man, Lew Mooney, and they married in 1947. Lew passed away in 2002. Jane still lives in the same house, 75 years after moving in.

Mr. and Mrs. Mooney raised six children – Mickey [Steinitz], Terry [McPhillips], Bill, Joe, John and Rich. The family has gone on to include 14 grandchildren and 11 great-grandchildren.

Lew and Jane, who worked as a doctor’s bookkeeper after she married and had kids, were active with the Holy Terrors and St. Matthew Parish. Her duties included sewing costumes and playing music for CYO theater productions, and she was a Boy Scout den mother. She was known for making the best peanut butter and jelly sandwiches.

Jane has been a member of the St. Matthew Seniors and Catholic Daughters. She still plays a mean game of shuffleboard, and her nickname is “The Hammer.” ••