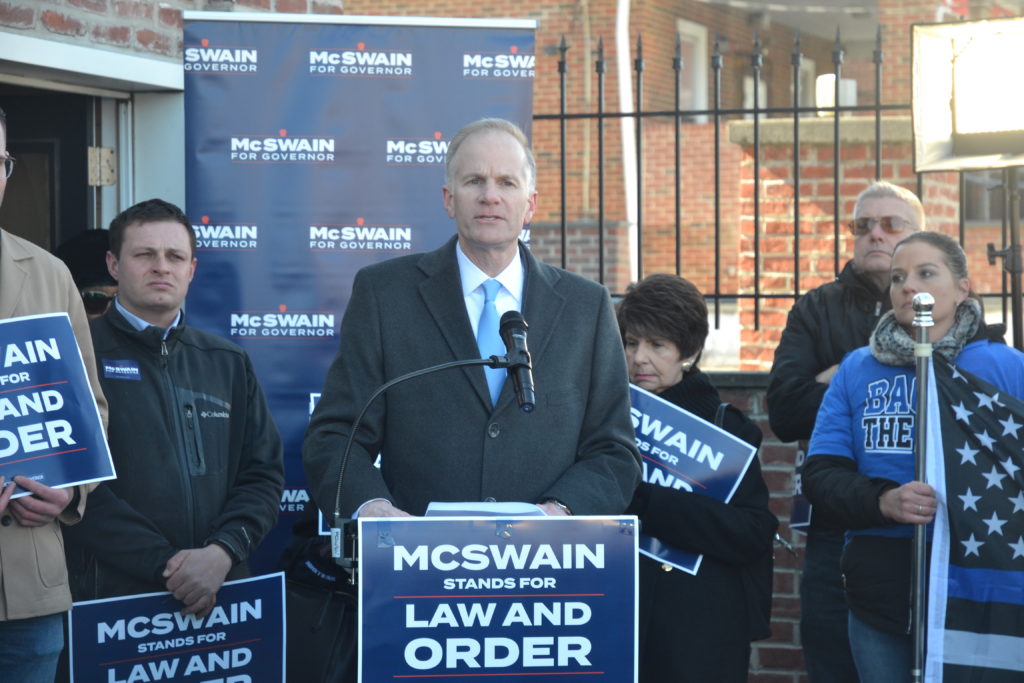 Bill McSwain, a Republican candidate for governor, was in Mayfair on Tuesday to outline his six-point crime plan, and saved the crowd favorite for last.

Standing outside Avenue Chiropractic, 6233 Frankford Ave., McSwain said he will lead the effort to pass a state constitutional amendment that the district attorney of Philadelphia will be appointed by the governor.

“That is how we will rid the city of Larry Krasner and any future Larry Krasners,” McSwain said to enthusiastic applause. “Under my leadership as governor, Larry Krasner’s days as district attorney will be numbered.”

McSwain hopes the legislature passes such an amendment before the end of the year and early in the 2023-24 session. If that happens, the amendment could be placed in front of statewide voters as soon as the May 2023 primary.

McSwain, a former U.S. Attorney and Marine, was introduced by Anne Marie Muldoon, owner of Avenue Chiropractic since 1993. A Resurrection of Our Lord and St. Hubert graduate, she thanked McSwain for fighting the policies of Krasner and Mayor Jim Kenney.

Muldoon likened the Rhawnhurst in which she grew up to Mayberry. Today, she said local neighborhoods are plagued by drug problems. She criticized the “hoodlums” who looted and rioted in the late spring of 2020. She was saddened to learn of the recent carjacking/murder of George Briscella outside his mom’s Rhawnhurst home. As for herself, she texts her mom every night to say she’s made it home safely.

McSwain wished Muldoon a happy “29th” birthday and called her a “great American” for her annual leadership in the Toys for Tots campaign before turning to the issue of crime, specifically the recent shooting of a SWAT officer in Kensington and Briscella’s murder.

“Just a few days ago, only a few miles from here, a fellow Marine was shot dead in the driveway of his elderly mother’s home. This could have been any one of us,” he said.

McSwain credited police officers with making arrests but blamed liberal city and state leaders for providing a revolving door for criminals with either no or low bail. He cited Kenney, Krasner, Gov. Tom Wolf and state Attorney General Josh Shapiro, who is the likely Democratic nominee for governor, as the crowd booed. He embraced the label of “law and order” candidate.

“Under the current progressive Democrat city and state leadership, there has been an unprecedented crime spree throughout this great city — but especially lately in this part of the city, the Northeast, which is traditionally a very safe place to live, work and raise a family,” he said.

During the 2020 rioting and looting, his office jailed some of the lawbreakers. He cited Lore-Elisabeth Blumenthal, charged with throwing a Molotov cocktail into a police car in front of City Hall during a protest of George Floyd’s death.

“I am pleased to report that to this day, this accused arsonist is sitting in federal detention, where I put her and where she belongs. Larry Krasner and Josh Shapiro never would have done that – they would have given her a medal,” he said.

The other parts of McSwain’s crime plan are automatic pretrial detention for violent felonies; the death penalty for anyone convicted of killing a law enforcement officer; increased funding for local law enforcement; an end to sanctuary cities, a prohibition on heroin injection sites and opposition to President Joe Biden’s plan [which the White House denies] for crack pipe giveaways; and creating financial incentives to recruit new law enforcement officers and ensure financial security for current law enforcement families by giving them more pay and a secure retirement.

Among those in attendance was Carlos Vega, who lost last year’s Democratic primary to Krasner.