Campaign Chatter — Voters to have their say Tuesday

Voters will head to the polls Tuesday to elect new members of City Council and state Senate and nominate candidates for state and federal office.

The top local race is the special election in the 5th Senatorial District. Democrat Jim Dillon faces Republican Sam Oropeza. The seat has been vacant since the beginning of the year, when John Sabatina Jr. resigned to become a Common Pleas Court judge. Republicans control the Senate, 29-20.

As for the 6th Councilmanic District seat, vacant since Bobby Henon resigned in January, Democratic state Rep. Mike Driscoll is the only candidate.

In the 173rd Legislative District, which Driscoll is vacating to run for Council, Democrats Pat Gallagher and Pete McDermott are squaring off in the primary. There is no Republican candidate.

In the 203rd Legislative District, the Democratic candidates are Yusuf Jackson, Anthony Bellmon and Heather Miller. No Republican filed.

City voters will also be asked the following four questions:

Shall the Philadelphia Home Rule Charter be amended to revise the composition of the Zoning Board of Adjustment by increasing the number of mayoral appointees from five to seven; by requiring Council confirmation of the mayor’s appointments; and by specifying qualifications that appointees must possess, including a demonstrated sensitivity to community concerns regarding development and the protection of the character of Philadelphia’s neighborhoods?

Should The Philadelphia Home Rule Charter be amended to remove all gender-based references?

Should the Educational Supplement to the Philadelphia Home Rule Charter be amended to remove all gender-based references?

Should The Philadelphia Home Rule Charter be amended to establish the Fair Housing Commission as an independent commission to administer and enforce statutes and ordinances concerning unfair rental practices and certain other matters concerning the landlord and tenant relationship and to adjudicate disputes related to such matters?

McSwain said the race is down to four candidates, including him. The others are Doug Mastriano, Lou Barletta and Dave White.

A former U.S. Attorney, McSwain spoke of his opposition to heroin injection sites, sanctuary cities and no-excuse mail-in ballots, support for voter ID, updated voter rolls, school choice and increased funding for police and prosecution of rioters and the alleged killers of police Sgt. James O’Connor. Terri O’Connor, the slain SWAT member’s widow, introduced McSwain at his campaign kickoff and appears in a TV ad for him filmed in her home.

McSwain calls District Attorney Larry Krasner “my mortal enemy.” He has proposed a constitutional amendment that would have the governor appoint Philadelphia’s district attorney. The proposal would have to pass the House and Senate in two consecutive sessions, then be approved by state voters, as soon as the May 2023 primary.

“That would pass overwhelmingly,” he predicted.

And if it does pass?

“Krasner’s out of here by May,” he said.

McSwain blamed the city for misplaced priorities, citing the plastic bag ban at a time of a high murder rate.

The winner of the primary will face Democrat Josh Shapiro, the state attorney general, who is unopposed. McSwain called Mastriano, “Josh Shapiro’s hand-picked candidate,” pointing to the Democrat’s TV commercial and mailer that includes statements about Mastriano intended to endear him to Republicans voters. 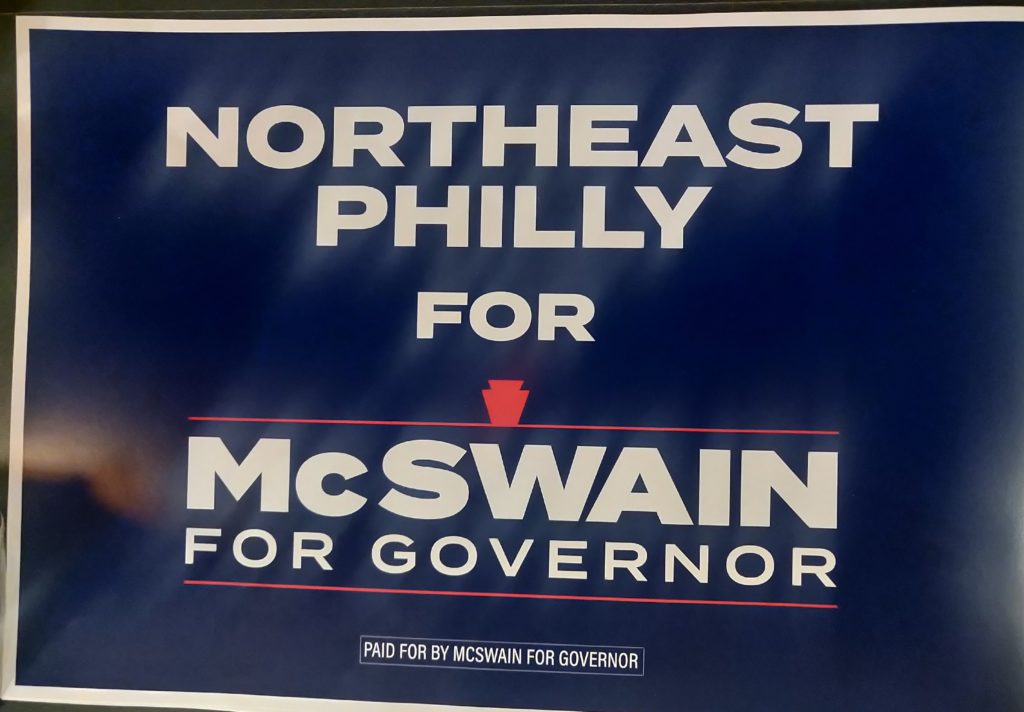 McSwain predicted he would beat Shapiro by double digits. ••