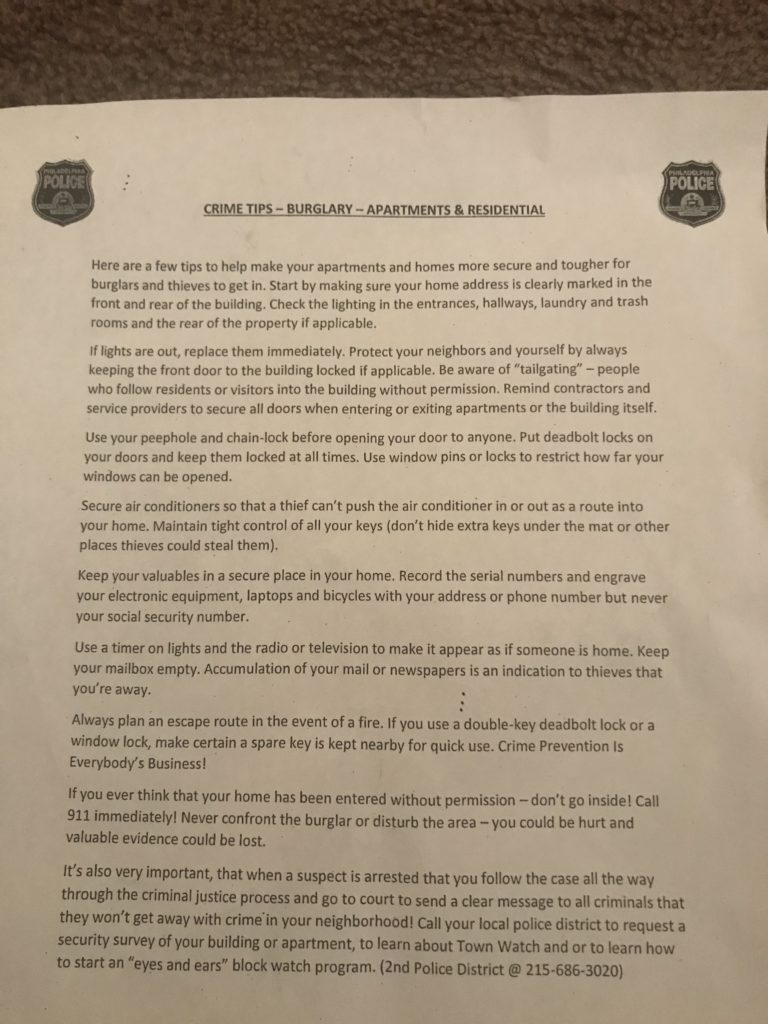 Mark Mroz, the community relations officer in the 2nd Police District, distributed crime tips to avoid burglaries, including in the many apartment buildings in Rhawnhurst.

The tips suggested that apartment buildings should always be locked, and residents and visitors should be aware of “tailgaters,” people who follow them in without permission. Contractors and service providers should be urged to secure all doors when coming or going.

Mroz discussed the May 8 shooting outside Chuck’s Alibi. The 2nd district had two officers in the area because of persistent parking and noise complaints about Chuck’s and promotion of a party that night on social media.

Mroz said it is believed two women argued over a murdered ex-boyfriend inside the bar. Later, according to Mroz, one of the women was in the front passenger seat of a car on Oxford Avenue while the other woman was in the vicinity, and the argument resumed.

An officer’s body camera caught the shooting on tape, and Mroz said the shooting appeared unprovoked. Mroz is dismayed that the alleged shooter has a posted bail of $750,000.

In other crime news, Mroz said a man fired a gun in the area of 1500 Cottman Ave. after an argument with a Lyft driver. The bullet hit a nearby Jiffy Lube. The suspect then carjacked a motorist before crashing the car and getting arrested.

Mroz also spoke of the robbery of an individual playing basketball at Fox Chase Recreation Center. Also, there have been several recent cases of stolen autos, with the keys left in the ignition by the owners.

In other news, Peggy Recupido, an aide to City Councilman Brian O’Neill, said there will be a recycling bin giveaway (with lid) on June 4, from 9-11 a.m., outside O’Neill’s office at Fraternal Order of Police Lodge 5, 11630 Caroline Road.

Recupido also announced that O’Neill is proposing two measures to combat large increases in property assessments. He wants an increase in the Homestead Exemption from $45,000 to the maximum $90,000.

“Might as well shoot for the moon,” Recupido said.

O’Neill also has a bill that would extend the 2022 Senior Citizen Tax Freeze application deadline to Sept. 30, so that eligible senior citizens are able to enroll in the program before the 2023 assessments take effect.

Meanwhile, neighbors complained about speeding on Algon Avenue, near Krewstown Road, with speed bumps a possible solution. There were also complaints about campers parked on the 1700 and 1800 blocks of Solly Ave.