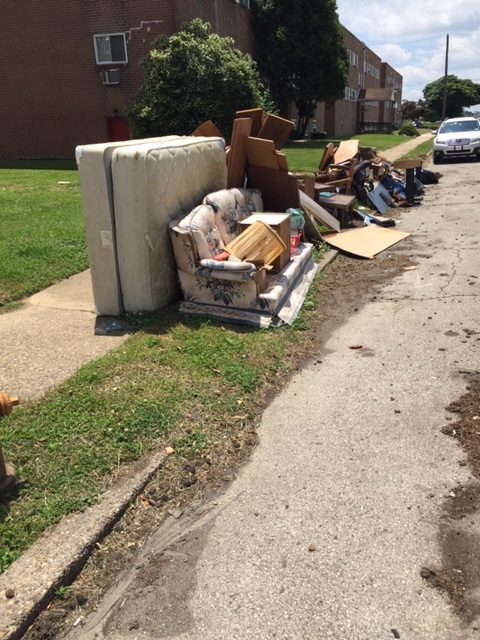 The apartment house at the corner of Dungan Road & Lorna Street (apartment house at 7845 Lorna St., 19111) has continued to place their trash curbside where apparently trash collection ignores this pick-up location. Trash should be placed in the driveway where other apartment houses nearby have Dumpsters. There is no Dumpster next to this apartment house in its adjacent back driveway.

It appears the building owners/landlord(s) may be out-of-state investors. They may not know of this situation. I doubt if there is an assigned superintendent for this dwelling. Obviously, this must be a Section 8 dwelling. Section 8 means tenants who have no financial stake in their residence, given taxpayer subsidies. Ownership pride would be more of a motivation to keep this area clean.

A disgraceful situation at this southeast corner of Dungan & Lorna.

I bring this to the attention of the streets department and to the Northeast Times with the hope that this disgraceful situation will receive the attention it sorely needs.

CLIP did nothing about this when I alerted them several months prior. They even denied accepting my pictures of this mess.

Remembering you Mom on your one-year anniversary. We miss your smile, your loving care and your beautiful faith.

You cared for your family for 93 years, always putting everyone else first. We miss you and love you, Mom.

I think anyone who had anything to do with the Texas school shooting should be fired and lose their pension. Did the police think they were hired to write parking tickets? I can’t believe not one of those officers said, to hell with this, I’m going in. What did they think the shooting was? I was a Philadelphia firefighter for 34 years. When we arrived at a fire, we didn’t wait for the chief, we did what we were trained to do. Go in and put out the fire.

The USA has over 332 million people and the total number of counties is 3,243.

Joe Biden is president because he won 306 electoral votes.

The founders got it right. The entire US governing system is a series of checks and balances. Read the rules, people.

The bigger the state, the more congressional representatives in Congress. Yet to more fairly balance every big and small region and every county’s unique interests, every state has two

US senators. California and New York have 2 senators. So do Alaska and West Virginia.

So stop whining, people, and get a reality check. Listen to the hard truth that you won’t receive or hear from CNN and Fox News.

The right needs to realize that the Republicans have only won the majority of the popular vote one time since 1988. Do something about it. Fight for the votes of the big cities in every state.

The left needs to realize that two-thirds of all counties in the US vote against the Democratic nominee every four years. Do something about it. Fight for the votes of the prairie and rural counties in every tiny hamlet throughout America.

The Republican Party wins lots of small population counties, and those counties do matter. Their supporters matter.

The Democratic Party wins lots of big cities, large population regions, and lots and lots of popular votes in really large states and those areas also matter. Their supporters matter.

FDR and LBJ both won huge landslides for the Democratic Party.

Ronald Reagan and Richard Nixon both won huge landslides for the Republican Party.

Nobody worried or whined about the popular vote or the Electoral College.

They went out and won. They won big.

So stop whining and tell your favorite political party to go out and fight for every vote in every single state, region, city and county in America.

Stop spewing nonsense talking points about fixing an electoral college system that is not broken and has worked for over 200 years.

The Electoral College system still works and is just fine, thank you.

The hottest weekend so far in Philadelphia was one of the most violent. With 18 shootings, 6 homicides and 8 stabbings, Philadelphia is on track for another violent summer.

I’m going to be blunt. If city officials wanted to do something about it, they would have started to do so a long time ago. Many of them think the entire system must be allowed to self-destruct, broken down and rebuilt into what they believe will be a new utopian system.

If this is not the case, why are police being prevented from performing proactive policing. Why are those who’ve committed multiple serious crimes still allowed to be on the streets? Why does Philadelphia seem to do everything in its power to prevent a safe environment for its citizens such as not even allowing police to stop vehicles for expired auto inspection stickers.

While things like rallies show concern, they do nothing in actuality to help stop crime. There is only one way to begin to stop the crime in the city. It starts with 3 people being removed from office: Mayor Kenney, DA Larry Krasner and Police Commissioner Danielle Outlaw. In any other organization, those at the top would be held responsible for poor performance. There are approximately 1.6 million people currently living in Philadelphia. As crime escalates and businesses leave, that number is sure to come down. Krasner was reelected with just 155,802 total votes. Mayor Kenney was reelected with 213,390 votes. If everyone in Philadelphia who believes people should not have to fear going to a store, driving to and from work, having your kids travel to and from school calls their PA House representative and demands these 3 people be removed from their positions for gross dereliction of duty, that would be the start of solving the problem.