Thanks for trip down memory lane

I would like to thank Patti Wirsz for her letter of Aug. 10. It was like a breath of fresh air. I grew up in Fishtown and my husband in Strawberry Mansion. We didn’t have fancy recreation centers or elaborately organized programs, yet we managed to amuse ourselves without getting into trouble ourselves or causing trouble for anyone else.

Outraged is not a strong enough word to describe my emotions and reaction when I learned that the 4-H program at Fox Chase Farm is basically being ended by the School District of Philadelphia. Not only is this a mean-spirited, horrendous decision to take away this valuable and wonderful program, it is incredible that it’s happening because of new rules that require the 4-H club to pay exorbitant fees ($55 per hour) to rent the farm. For 30 years (that is not a typo – 30 years) these wonderful educational experiences have been enjoyed by so many children, yet now, after increase upon increase in state funding, this cut is made by a school district that seems to make a hobby out of finding ways to waste tax dollars. Could this possibly be because our city’s only working farm is located in the Far Northeast?

And to add insult to injury, we just recently learned of the hiring of a new school superintendent at an extremely hefty salary only to see him ask for and receive a contract for a consultant from Tennessee with an abysmal reputation to “help” the superintendent devise a plan for the schools. A contract worth hundreds of thousands of dollars per year. Shouldn’t the superintendent have had a plan of his own to present to the school board when it vetted him for his position and hired him at a huge salary? So now, at a time when we need programs like 4-H more than ever to educate our youths, keep them off the streets and out of danger, and give them a positive atmosphere of learning and emotional stability, the school district yanks this lifeline away. I was a 4-H kid, so I know how important this is.

Taking 4-H away from young Philadelphians is cruel, unnecessary and unacceptable. The school district is stealing the hearts and souls of these children; they are nothing more than a big-time corporate thief. When elected to represent this very district wherein the Fox Chase Farm is located, I vow to work to protect 4-H and to require the school district to fund additional model programs like it.

In my opinion concerning white supremacists and hate groups, their numbers seem to be growing. From my perspective, they are quite unhappy with their “lot in life.” You see them in many parts of our country and almost every other country. Their main goal is to create and force their own idea of utopia in every part of our society. Most of us hope and take action that this will never, never happen. Too many of these individuals are alienated from today’s society and consider themselves outsiders. If truth be told, they hate themselves even more than the people they purport to hate. It is their many life failures that gather these like minds together. This provides them with a sense of nationalism and mob mentality that is so repugnant to almost every American citizen. Life, liberty and the pursuit of happiness to these hate groups only pertain to their narrow interpretation for themselves. The safeguards and checks and balances that our founding fathers established are the best gifts we all could have been given. So please remember that we had all better hang together or most assuredly we will hang separately. If you don’t agree, just ask Mike Pence.

May I request two actions.

2. Please, truthfully, ask yourself: Are you one of these lost children?

Equal justice under the law?

The recent FBI raid of former President Trump’s residence at the Mar-a-Lago Club, in Florida, was an unnecessary and totally needless provocation. The FBI director, Christopher Wray, and the attorney general, Merrick Garland, have run an investigation that would befit a Mafia drug kingpin. Not the respect that a former president of the United States would deserve. Very unwise and dangerous.

The mainstream media is also complicit in ratcheting up and hyping the “inevitable” indictment and prosecution of the 45th president of the United States. There is nothing to be gained by sticking a finger into the eyes of 74 million Trump voters by conducting an unprecedented 9-hour search that took paperwork from Trump’s private residence, during the time frame of Jan. 20, 2017 through Jan. 20, 2021. In other words, the entire span of Donald Trump’s presidency. Why?

Taking 3 passports from the former president does nothing to give the general public confidence that this search-and-seizure mission was done professionally and without bias. President Biden should lower the temperature and demand a full accountability of why this raid was agreed upon and was this search absolutely vital to the nation’s best interest. Wray and Garland need to testify before Congress on why this operation needed to happen.

One final thought. We have been told over and over that … “no one is above the law. Not even a former president.” I would submit though that after the Russian collusion “delusion,” the Mueller Report, 2 different impeachment trials, the Jan. 6 select committee and multiple leaks by the government to the media, that no one is below the law either. Not even Donald J. Trump.

Americans should be smarter than the propaganda that Biden and the far left are spewing.

“Exxon is more profitable than God,” but not more than Apple or Alphabet.

Biden forced higher oil prices because of his sanctions on Russia, not allowing the oil from Canada pipeline and stopping the oil companies from using some US land.

How are the sanctions working for you, Joe, as Ukrainians die everyday?

We have shortages on our shelves and misinformation from some media outlets just like the Russians (TASS) had in the 1960s.

With the inflation rate so high, if Biden took an economics class did he plagiarize to get by?

Jimmy Carter, you finally lived long enough to see a president that is worse than you. 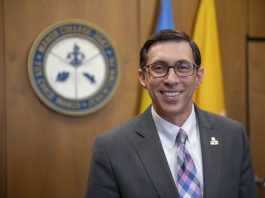