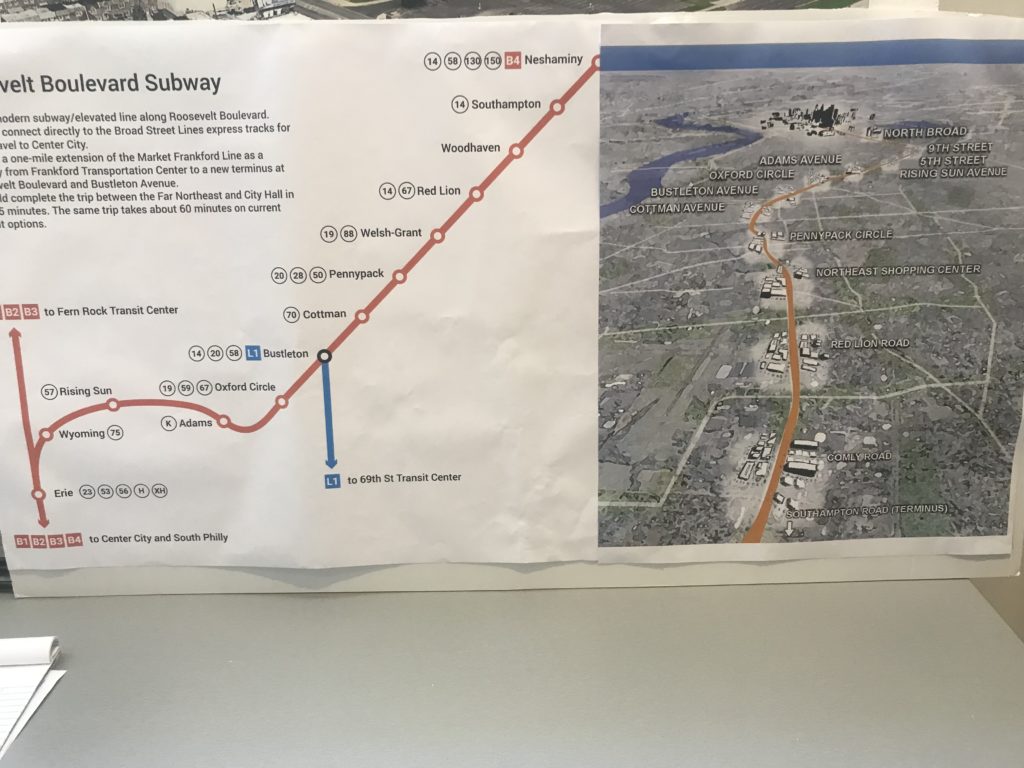 A town hall took place on Saturday morning at People Acting To Help, 1919 Cottman Ave., that centered on an oft-discussed topic – transit options on Roosevelt Boulevard.

Solomon moderated a four-man panel and took questions from the 100-plus people in attendance. Among those on hand were state Rep. Joe Hohenstein, deputy streets commissioner Richard Montanez, legislative candidate Anthony Bellmon and aides to City Councilman Mike Driscoll and Councilwoman Cherelle Parker.

The overwhelming number of people – from the moderator to the panelists to those in the crowd – wanted improvements on the Boulevard, which consists of 12 lanes and is wider than a football field. Suggested improvements would make the roadway safer for drivers and pedestrians by reducing vehicular traffic.

People were able to express their view by vote even before the town hall started. The vote was 53 for a subway, 30 for elevated rail, 17 for more bus routes and two for no change.

Most of the discussion revolved around a possible subway, with proponents saying it would be connected to the Broad Street Subway, perhaps around Pike Street. Possible subway stops on the Boulevard would be at Rising Sun, Adams, Oxford Circle, Bustleton, Cottman, Pennypack Circle, Welsh/Grant, Red Lion, Woodhaven/Comly, Southampton and Neshaminy Mall.

Meanwhile, the El could extend to the Boulevard at Bustleton Avenue.

Supporters – some of whom recall the failed effort to bring the subway to the old Sears on the Boulevard – outlined numerous reasons why a subway should be built, contending that too much money is spent on expanding I-95 and building parking garages.

They say the current commute from City Hall to the Far Northeast is 60 minutes. A subway, they say, would reduce the trip to 35 minutes.

In addition, Northeast residents would have a direct ride to the stadium complex in South Philadelphia, avoiding high parking costs. And they’d easily be able to get to Center City and not have to pay to park in a garage or worry about getting a ticket if parking on the street.

Commercial corridors would benefit with increased foot traffic, and there would be plenty of construction jobs. Commuters would have better access to jobs, while students would be able to get to some of the better public high schools located on or near Broad Street. And, air pollution would decrease.

Younger people moving to Fishtown and Northern Liberties would be more likely to live in the Northeast with better transportation.

Despite the enthusiasm, a subway is nowhere near being shovel ready. First, there would have to be a professional feasibility study. Construction would be at least five to 10 years away, with an estimated cost of $10 billion. And motorists might not be happy that portions of the inner lanes of the Boulevard would be closed for years while construction takes place.

Though there is grassroots support for a subway, backers understand that they need to reach out to other stakeholders, such as SEPTA, employers, trade unions and the Greater Northeast Philadelphia Chamber of Commerce. And they’ll need a mayor who makes the idea a priority.

Not everyone was sold on the idea. A few people mentioned SEPTA’s existing woes, including crime, filth and drug use at its stations.

Solomon said Saturday’s three-hour gathering would be the “first of many meetings,” and that SEPTA will be represented at the next meeting. He added that he hopes people stay engaged.

“We work, work, work until we get rapid transit up and down the Boulevard,” he said. ••