It was a photo Joey Phillips certainly didn’t “like” but one he couldn’t forget.

Phillips is the starting goalie on the Archbishop Ryan High School soccer team, and during his junior year, Father Judge posted a photo of the scoreboard on social media showing that they had eliminated the Raiders from the Catholic League playoffs.

He had all year to think about that loss and he made sure that his final year at Ryan wouldn’t end the same way.

The goalie scored in sudden-death penalty kicks and then stonewalled the Crusaders on Saturday at Northeast High School in their sudden-death attempt to bring the Catholic League championship to Academy Road. Ryan won 2-1 in penalty kicks after the first five shooters each scored three goals, sending it to sudden death.

The celebration that followed was massive, and there were a lot of reasons for that.

It’s Ryan’s first boys soccer championship in 19 years, or one year before Phillips was born. It came at the expense of a very good Judge team that took first place during the regular season, and it marked the end of a Catholic League classic that saw the Crusaders score in the first half, the Raiders answer in the second, then two sudden death overtime periods before the penalty kicks.

It also gave Ryan coach Ryan Haney his first Catholic League championship as the coach of the team he won a championship for as a player. He also won six championships while coaching the Ryan girls soccer team.

But the star of the day was Phillips, who seconds after putting Ryan in the lead made a diving save to make his goal stand up.

“Officially, that’s my first Catholic League goal, and it means more than anything, way bigger than anything in the regular season,” Phillips said. “As a goalie, you don’t always want to shoot, you want to focus on stopping the shot, so when (Haney) asked me if I wanted to shoot during the first five, I said no.

“He asked me again and I said yeah. I wanted to end it. We have great guys who can end it, they all did a great job. I was just happy when I felt the ball, then I heard it hit the post. I knew at that point it was over.”

Phillips made sure not to get overconfident. It would have been easy to do so after the Raiders scored on their first two kicks, and the Crusaders were stoned by the goalie. But Ryan missed its next two shots and the Crusaders cashed in on their next two tries.

Both teams scored on their final kicks, sending it to the sudden death opportunity.

The win was the final of a three-game run for the Raiders that saw them knock off Roman Catholic in the first round, La Salle in the semifinals and Judge in the finals. Those three teams defeated Ryan during the regular season.

“It feels great to beat Judge, because we are all friends, we know a lot of them and they’re our friends,” Phillips said. “So now we have the inside jokes. And it’s good to beat a team like Judge. They’re good, and we knew they’re very good.

“Last year, losing to them hurt so bad. I remember seeing a picture that they posted right after the game of the scoreboard. They won 4-3. It hurt so much because they beat us. They’re a good team, they want to beat us and we want to beat them. But it’s a friendly rivalry.”

This was a different year for Phillips. Last year he was All-State and First-Team All-Catholic. This year, despite having another fantastic season, the Raiders goalie was Second-Team All-Catholic. It’s a trade-off Phillips is happy to make.

“All-Catholic means nothing to me, the only thing I cared about this year was winning the Catholic League,” said Phillips, who will lead the Raiders into the District 12 championship game this week and after that, into the state playoffs for the third year in a row. “The only thing we wanted was a championship. It was so important to all of us. This is why we all did what we did.”

It’s also the reason Haney went with Phillips as both a shooter and a goalie.

“He brings everything. He’s a leader. A great talent. He’s been through this. The seniors on this team were freshmen when we beat Judge in the playoffs. They are a special group.”

“This means everything for the school, the community,” Haney said. “And it meant a lot to win because Mr. (George) Todt was here. We hugged and had a special moment. It means a lot because he’s my coach, my mentor, he means so much.”

Phillips isn’t sure where he’ll play next year, but he does want to play in college. He’ll go in undecided on a major. Computer science is a possibility.

He’ll also go into college as a Catholic League champion. 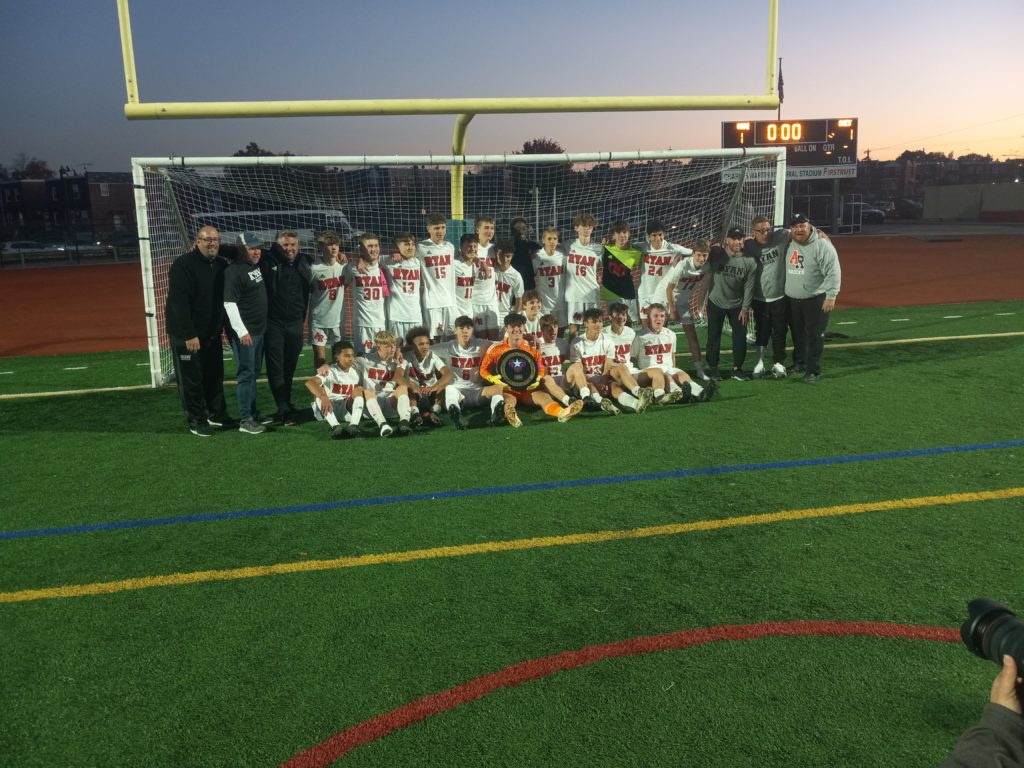