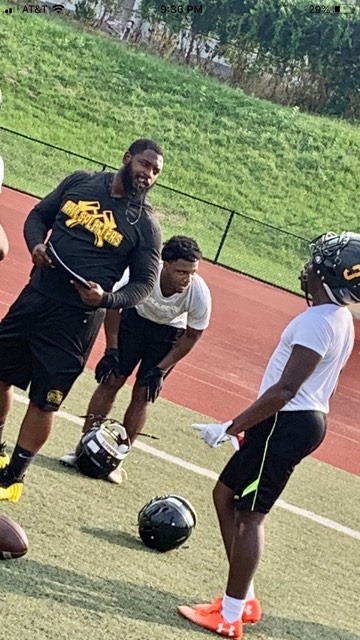 Khani Knight was happy to be a standout wide receiver.

But the team needed a quarterback, and he volunteered to make the jump.

Knight is a senior on the Abraham Lincoln High School football team, and instead of catching passes, he’s throwing them. He’s been doing it for three years, so he’s now a veteran, but as a sophomore, he was learning on the fly.

“We didn’t have one at the time, so I said I would do it,” said Knight, who lives not far from the school. “I was a receiver, but I was happy to play quarterback. But at first, it was hard.

“I’m a dual-threat quarterback, now I can throw and run. I learned a lot, had a lot of help. It was hard at first, but I practiced and practiced until it became second (nature). Now I’m really comfortable back there.”

Now, he’s the quarterback of a team that’s going for a Public League championship.

Lincoln defeated Olney Charter 8-0 on Friday for the right to play in the Public League Class 6A title game. The Railsplitters will meet Northeast, which knocked off Central 41-6 in the other semifinal. The Vikings will host the championship game.

The winner of that game will play the winner of Friday’s game between La Salle and St. Joe’s Prep in the District 12 championship game.

Knight threw for a two-point conversion in the victory over the Trojans, and also showed great leadership throughout the game, helping the team advance.

“Being a leader is probably the biggest thing you have to do when you’re a quarterback,” Knight said. “I’m a great leader on and off the field, I try to be a role model. I’m a captain. It’s very important because everyone feeds off your energy, you’re the leader, you’re the coach on the field. It took a year. It was hard at first. The transition, I wasn’t prepared for it.

“It helps that I have a really good relationship with my coaches and my players. I get along with everyone. I try to lead the team by example, but I’m also a good leader on and off the field. That’s a big part about being a quarterback, and I’m better at it now that I’m a senior.”

This has been a great year for the Railsplitters, and that continues into the championship game.

Lincoln has played a very difficult schedule this year, and they’re better for it.

Despite losing three nonleague games, they hung tough against Cedar Crest, of Lebanon, and Haverford, but their best performance of the season may have been a 35-22 defeat at the hands of Central Catholic. The Railsplitters traveled to Pittsburgh for that early-season nonleague game, and while they fell short, they proved they could hang with a squad that is traditionally one of the top teams in the state.

It was the highlight of the year for the Railsplitters, despite the loss. Against Public League teams, Lincoln is perfect.

“The game against Pittsburgh was fun because we went out there and played really well,” Knight said. “I knew we were good before we played them, and we went down there with a fighting mentality and tried our best. I think we played great teams and that helped us. If you want to be good, you have to play good teams to get better.”

That will continue this weekend.

Northeast has won six straight Public League 6A championships, and the Vikings head into this week’s game as the favorite. But Lincoln has proven it can play with anyone, and the Railsplitters are excited to represent their school in the championship game.

The goal was originally to get there. Now, that’s changed.

“Our goal is to go out there, and win a championship for Lincoln,” Knight said. “Our goal was to get there, now it’s to win. We have a very good team. That’s our goal.”

Knight also hopes to figure out his future over the next few months.

Also a sprinter on the track team, Knight’s ultimate goal is to play college football and get an education.

“I’m working hard on my grades, I want to see if I get any offers,” Knight said. “I want to study either law or criminal justice. I used to watch a lot of shows about that. I think that would be a good career for me.”

For now, he just wants to lead Lincoln to a successful finish.

And, of course, keep his receivers happy.

As a former wideout, he knows exactly what he needs to do to make his team happy, and he plans on continuing that.

“When they ask for the ball, I know how it feels to not get the ball,” Knight said. “I spread the ball out, try to get everyone involved.

“We have a great team. The defense, the line, the running backs, the receivers, the coaches. This has been a great year. We’re playing and fighting together.”

While the Railsplitters and Vikings move on, the two Northeast Catholic League schools were eliminated from the playoffs.

Father Judge lost to La Salle 28-7 in a Catholic League 6A semifinal, while Archbishop Ryan fell just short of knocking off Bonner-Prendergast, but the Friars won 27-21.

Both teams will be idle until Thanksgiving, when the Raiders will play Washington and the Crusaders will meet the Railsplitters.